Celebrating Saint George,
a day early or a day late 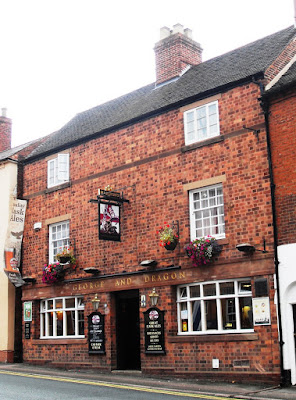 Today [23 April] is normally marked in the Church Calendar as Saint George’s Day. However, most churches probably marked today as the Second Sunday of Easter, or Low Sunday.

The ‘Rules to Order the Christian Year’ in Common Worship advise: ‘When St George’s Day or St Mark’s Day falls between Palm Sunday and the Second Sunday of Easter inclusive, it is transferred to the Monday after the Second Sunday of Easter. If both fall in this period, St George’s Day is transferred to the Monday and St Mark’s Day to the Tuesday.’

The Court Baron and View of Frankpledge, commonly known as Saint George’s Court, is an ancient manorial court. The manorial rights of the Barony of Lichfield were transferred by Charter of Edward VI in 1548 to the Bailiffs, Burgesses and Commonalty of the City, which in today’s terms mean the Mayor, councillors and citizens.

The Court is now held in a light-hearted manner but still appoints the ancient officers of the manor: two High Constables, seven Dozeners (or petty constables), two Pinners and two Ale Tasters.

The High Constables report on their work during the previous year, and a jury is empanelled and then imposes fines on those who have rejected the summons to attend, after first hearing their amusing excuses. 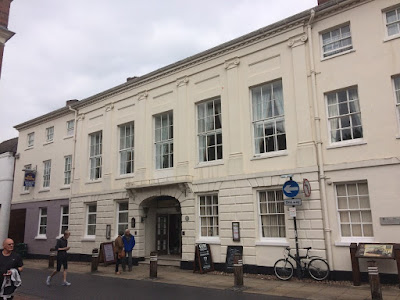 The George Hotel in Bird Street is one of the oldest hotels in Lichfield. In the 19th century, the hotel’s sign depicted Saint George and the Dragon, and – despite changes over the years – the name George has been retained in the hotel name.

A little further north, the George and Dragon on Beacon Street is a friendly local pub with stunning views of Lichfield Cathedral from the garden behind, including the site of Prince Rupert’s Mound, an important battle site during the Siege of Lichfield in the English Civil War in the 1640s.

Today, this quiet corner of Lichfield has a quaint, semi-rural atmosphere about it.

Despite Saint George’s Court being moved a day this weekend, there is a Family Fun Day entertainment in the George and Dragon today to celebrate ‘England’s most noble patron saint.’ Only the most pedantic critic would point out that Saint George is not English at all – after all, the English might then end up laying claim to Saint Patrick. 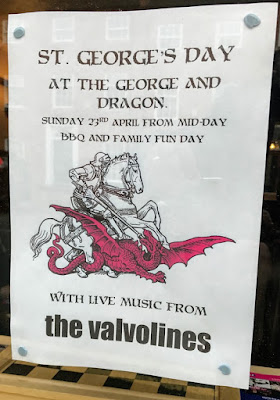 A family fun day at the George and Dragon today (Photograph: Patrick Comerford, 2017)

Some years ago, Archbishop John Sentamu of York launched a campaign for a bank holiday in England to mark Saint George’s Day. ‘As someone who is inspired by Saint George’s refusal to renounce his discipleship of Jesus Christ,’ he said, ‘I have long campaigned for us to have a special holiday where we can celebrate our patron saint and all that is great about our wonderful nation.’

And I often think it is it due to lingering Irish antagonism towards England – unspoken, but for all that no less distasteful – that Saint George’s Day is seldom marked in Ireland, even in churches that bear his name.

I imagine there are similarly named streets in most Irish cities and large towns. In his recent book, Churches of the Church of Ireland Dedicated to Saint George, Duncan Scarlett records how the cult of Saint George was popular in the Pale until the Reformation.

Many of these are Georgian churches, and may have been named not in memory of Saint George but in honour of one the Hanoverian monarchs, usually King George III or King George IV. 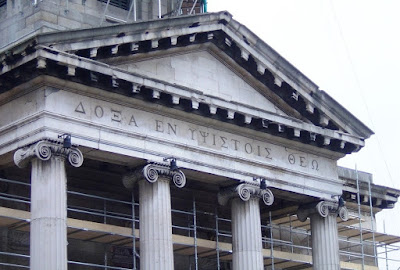 There never was a liturgical provision for the Feast of Saint George – not even in the period when the Church of Ireland the Church of England were united, from the Act of Union in 1801 to disestablishment in 1871.

Since 1928, Saint George’s Church in Belfast has celebrated this feast day liturgically – but only since 23 April 1928. But the bells of Saint George’s in Hardwicke Place, Dublin, were rung throughout the afternoon of 23 April at one stage in the 19th century. 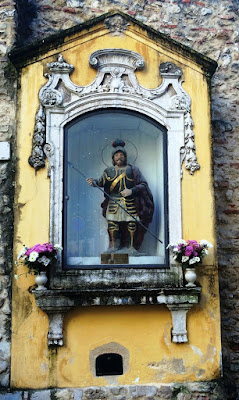 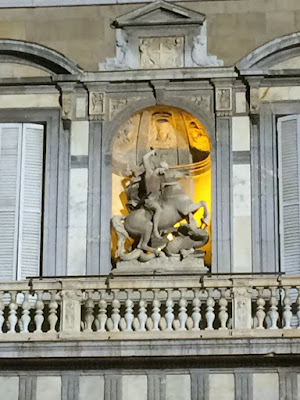 Statues of Saint George in Lisbon (top) and Barcelona (below) (Photographs: Patrick Comerford)

I have noticed in recent years how Saint George is the patron saint of both Lisbon and Barcelona. So why have Irish people come to see Saint George as being particularly English? And why has George lost popularity in Irish families as a child’s name?

Indeed, who is Saint George?

Was there ever such a person?

Can we separate the historical George from the mythical George of the stories of George and the Dragon?

And why is he so popular universally – apart from Ireland? 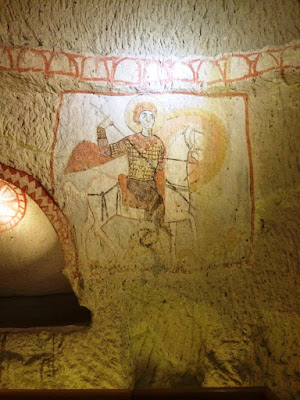 Saint George slaying the Dragon … a Cappadocian martyr depicted in the chapel of Saint Basil in Goreme in Cappadocia (Photograph: Patrick Comerford)

The Greek name Γεώργιος (Geōrgios, Latin Georgius) means ‘worker of the land.’ It is likely that Saint George was born to a Christian noble family in Lydda or Lod, south-east of present-day Tel Aviv, in the late third century, sometime between about 275 AD and 285 AD, and that he died in Nicomedia, present-day Izmit, about 100 km east of Istanbul in modern Turkey.

It is said that his father was a Roman army official from Cappadocia, and his mother was from Palestine. They were both Christians and from noble families of Anici, and the child was raised a Christian.

At the age of 14, George’s father died, and his mother died a few years later. George then decided to visit the Emperor Diocletian in the imperial city of Nicomedia seeking a career as a soldier. Diocletian welcomed him with open arms, and by his late 20s George was a tribunus, attached to the imperial guard in Nicomedia.

In the year 302, Diocletian issued an edict that every Christian soldier in the army should be arrested and every other soldier should offer a sacrifice to the pagan gods. But George objected and with the courage of his faith approached the Emperor.

Diocletian was upset, not wanting to lose his best tribune and the son of his best official. George loudly denounced the emperor’s edict, and in front of his fellow soldiers and tribunes declared himself a Christian. Diocletian attempted to convert George, even offering him gifts of land, money and slaves if he made a sacrifice to the Roman gods. But George declined all the offers from the emperor.

Accepting the futility of his efforts, Diocletian ordered his execution. Before the execution, George gave his wealth to the poor and prepared himself. After being tortured, George was beheaded before the city walls of Nicomedia on 23 April 303. When the Empress Alexandra and Athanasius, a pagan priest, saw his suffering they too became Christians, and they too were martyred.

Saint George’s body was returned to Lydda or Lod for burial, and Christians began to revere him as a martyr. He is honoured by the Eastern Orthodox Church, which refers to him as a ‘Great Martyr,’ and is a popular saint in Greece, Romania, Russia and other Orthodox countries. 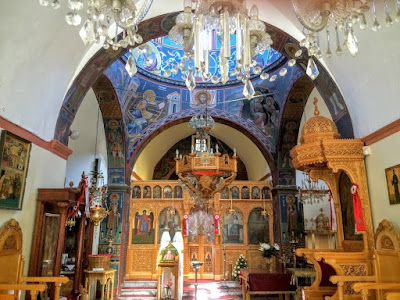 But how did Saint George become the patron saint of England?

Saint Edward the Confessor, who died on 5 January 1066, was canonised by Pope Alexander III in 116. For some reason, he is commemorated on 13 October by the Church of England and the Roman Catholic Church, and he was regarded as the patron saint of kings, difficult marriages, and separated spouses. From the reign of Henry II until 1348, he was revered as the patron saint of England.

However, during the reign of Edward III he was replaced as patron by Saint George, although Edward has remained the patron saint of the British royal family.
Saint George was mentioned among the martyrs by Bede. His feast day soon gained widespread popularity throughout England, especially with the Crusades. Saint George’s flag, a red cross on a white background, was adopted by England and the City of London in 1190 for ships entering the Mediterranean to benefit from the protection of the Genoese fleet during the Crusades.

In 1222, the Synod of Oxford declared Saint George’s Day a feast day throughout England. The English were heard invoking Saint George as a battle cry on several occasions during the Hundred Years’ War. 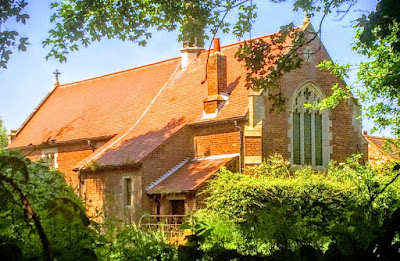 When the English Reformation severely curtailed the saints’ days in the Church Calendar, Saint George’s Day was one that managed to survive. Nevertheless, it is still surprising that England’s patron saint was never selected from a list of English saints that includes Saint Alban (died 209, 251, or 304, feast day 22 June), Saint Cuthbert of Lindisfarne (died 687, feast day 20 March), Saint Edmund the Martyr (870, 20 November), Saint Edward the Confessor (1066, 30 November) or Saint Thomas a Becket of Canterbury (1170, 29 December).

The English far right has tried to capture Saint George and to use his flag as they claim immigration poses a threat to English national identity. In the post-Brexit atmosphere in England today, and amid all the clamour of nationalist rhetoric that is going to be sounded during this election campaign, it is worth remembering that Saint George was born in Palestine to a Turkish father and Palestinian mother, that he lived in the Middle East.

He would never have made it to Britain if he had tried to flee those who vilified his religious beliefs. Instead, he was murdered by people who persecuted him because of his religious beliefs. He stands for anything but the anti-migrant rhetoric, racism and xenophobia that we are in danger of hearing over the next few weeks. 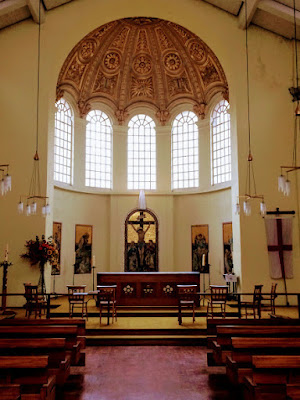 God of hosts,
who so kindled the flame of love
in the heart of your servant George
that he bore witness to the risen Lord
by his life and by his death:
give us the same faith and power of love
that we who rejoice in his triumphs
may come to share with him the fullness of the resurrection;
through Jesus Christ your Son our Lord,
who is alive and reigns with you,
in the unity of the Holy Spirit,
one God, now and for ever.

Eternal God,
who gave us this holy meal
in which we have celebrated the glory of the cross
and the victory of your martyr George:
by our communion with Christ
in his saving death and resurrection,
give us with all your saints the courage to conquer evil
and so to share the fruit of the tree of life;
through Jesus Christ our Lord. 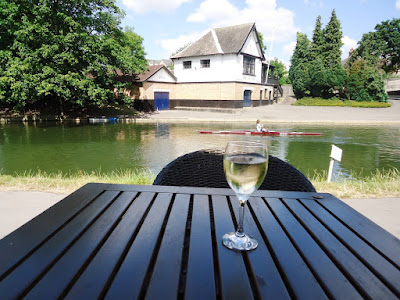 A glass of wine on a summer afternoon at Fort St George, the oldest pub on the River Cam in Cambridge (Photograph: Patrick Comerford)