A May Day walk by an old
railway line with swallows,
Aristotle and a light sabre 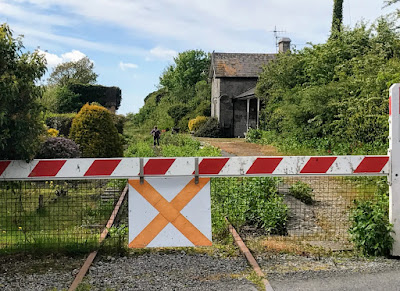 There is an aphorism that ‘one swallow does not a summer make.’ The saying is based on an observation by Aristotle in the Nicomachean Ethics (Ἠθικὰ Νικομάχεια):

‘The good of man is the active exercise of his soul's faculties in conformity with excellence or virtue, or if there be several human excellences or virtues, in conformity with the best and most perfect among them. One swallow does not a summer make, nor one fine day; similarly, neither can one day or brief time of happiness does not make one blessed and happy’ (Nicomachean Ethics, I.7.1098a).

But May Day is supposed to be the first day of summer, and there was a large cluster of swallows – a dozen or more – swirling and swooping across the fields and roads as I walked out of Askeaton this afternoon, passing the old quarry and the Kingspan factory, walking on south through fields of green, with grazing cattle and horses, as far as the old railway station and the old railway line.

The detached former railway station building, now in use as a house, was built around 1857. It is a three-bay, single-storey block with a gable-fronted projecting single-bay one-and-half-storey west bay, and a lean-to to the west of the elevation. There is a gabled outbuilding to the west of the building.

This station house was in use on the Limerick to Foynes railway line until 2003, with a resident station master. The building retains its original form and is characteristic of railway stations of the early Victorian period.

Like the old Harcourt Street line in Dublin, this railway line could be renovated with some imagination, and as a suburban railway line from Limerick, like the DART or the Luas in Dublin, it could breathe new life into this part of west Limerick, and to Limerick city too. 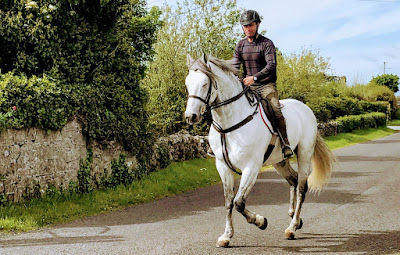 Meeting a horse and rider on the way back into Askeaton this afternoon (Photograph: Photograph: Patrick Comerford, 2017)

Walking back into Askeaton, I basked in the early summer sunshine, enjoying the company of horses and swallows, I recalled past May Days spent in Beaumaris, Portmeirion and Llfair PG in Wales last year, in Madrid in 2009, and in Bucharest in 1991. And I recalled too that today, as well as being May Day and the first day of summer, is also the Feast of Saint Philip and James in the Anglican calendar, although they are celebrated on 3 May in the Calendar of the Roman Catholic Church.

Saint Philip and Saint James appear in the list of the twelve apostles in the first three Gospels but are frequently confused with other early saints who share their names. In Saint John’s Gospel, Saint Philip has a more prominent rôle, being the third of the apostles to be called by Christ and then himself bringing his friend Nathanael to the Lord.

Saint Philip is the spokesman for the other apostles who are questioning the capacity for feeding the 5,000 and, at the Last Supper, enters into a sort of dialogue with Christ that leads to the Farewell Discourses in the Fourth Gospel. Saint James is said to be the son of Alphaeus, and is often known as ‘James the Less’ to distinguish him. He may also be the ‘James the Younger’ who, in Saint Mark’s Gospel, is a witness to the Crucifixion.

They are celebrated on the same day because the church in Rome, where their relics rest, was dedicated on this day in the year 560.

There is Pip ’n Jay Church in Bristol, whose official dedication is to these two saints as Saint Philip and Saint Jacob. But this day has also given us the word ‘popinjay’ for a vain or conceited person or ‘fop.’

Yet, despite the cultural legacy they have left us, the Philip and James we remember today are, to a great degree, small-bit players – almost anonymous or forgotten – in the New Testament, and in the Church calendar.

The Western Church commemorates James the Greater on 25 July, James the Brother of the Lord on 23 or 25 October, but James the Less has no day for himself, he shares it with Philip, on 1 May. Philip the Apostle, who has to share this commemoration, is frequently confused with Philip the Deacon (Acts 6: 7; 8: 5-40; 21: 8 ff) – but Philip the Deacon has his own day on 6 June or 11 October. Indeed, apart from sharing a day, Philip and James have also been transferred this year because yesterday was Ascension Day.

The James we remember today is James, the Son of Alphaeus. We know nothing about this James, apart from the fact that Jesus called him to be one of the 12. He is not James, the Brother of the Lord, later Bishop of Jerusalem and the traditional author of the Letter of James. Nor is he James the son of Zebedee, also an apostle and known as James the Greater. He appears on lists of the 12 – usually in the ninth place – but is never mentioned otherwise.

Yet, despite the near-anonymity of James and the weaknesses in Philip, these two became foundation pillars in the Church. They display total human helplessness yet become apostles who bring the Good News into the world. Indeed, from the very beginning, Philip has an oft-forgotten role in bringing people to Christ. Perhaps because he had a Greek name, some Gentile proselytes came and asked him to introduce them to Christ.

We see in James and Philip, ordinary, weak, everyday human men who, nevertheless, became pillars of the Church at its very foundation.

Perhaps because they are often seen as such ordinary, even weak, men among the apostles, I was surprised the week before last to see that in his statue on the West Front of Lichfield Cathedral, Saint James the Less appears to be holding a light sabre.

But no, he has not declared ‘Jedi’ as his religion on the census returns. He is, in fact, holding a book and club, which are his traditional symbols, but the copper handle of the broom has changed in colour with the weather – another reminder that summer is on the way. 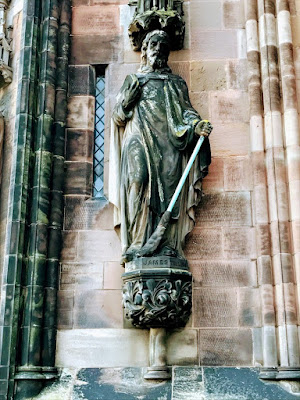 Saint James the Less with his ‘light sabre’ on the west façade of Lichfield Cathedral (Photograph: Patrick Comerford, 2017)

Posted by Patrick Comerford at 19:45