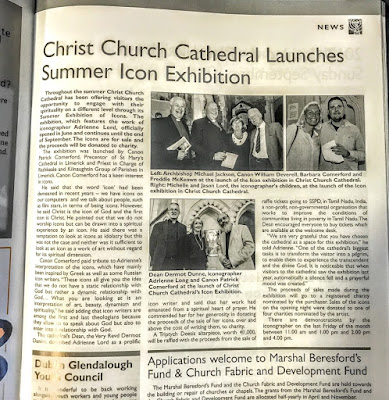 The ‘Church Review,’ the diocesan magazine in Dublin and Glendalough, publishes the following half-page news report in current edition [September 2017]: 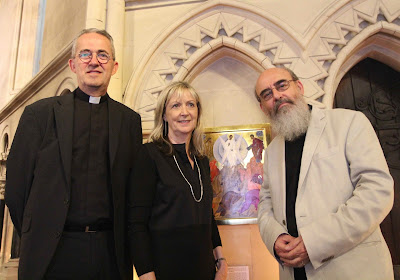 Throughout the summer, Christ Church Cathedral has been offering visitors the opportunity to engage with their spirituality on a different level through its Summer Exhibition of Icons. The exhibition, which features the work of iconographer Adrienne Lord, officially opened in June and continues until the end of September. The icons are for sale and the proceeds will be donated to charity.

The exhibition was launched by Canon Patrick Comerford, Precentor of St Mary’s Cathedral in Limerick and priest-in-charge of Rathkeale and Kilnaughtin Group of Parishes in Limerick. Canon Comerford has a keen interest in icons.

He said that the word ‘icon’ had been demeaned in recent years – we have icons on our computers and we talk about people, such as film stars, in terms of being icons. However, he said Christ is the icon of God and the first icon is Christ. He pointed out that we do not worship icons but can be drawn into a spiritual experience by an icon. He said there was a temptation to look at icons as idolatry but this was not the case and neither is sufficient to look at an icon as a work of art without regard for its spiritual dimension.

The cathedral’s Dean, the Very Revd Dermot Dunne, described Adrienne Lord as a prolific icon writer and said that her work had emanated from a spiritual heart of prayer. He commended her for her generosity in donating the proceeds of the sale of her icons, over and above the cost of writing them, to charity.

A Triptych Deesis altarpiece, worth €1,000, will be raffled with the proceeds from the sale of raffle tickets going to SSPD, in Tamil Nadu, India, a non-profit, non-governmental organisation that works to improve the conditions of communities living in poverty in Tamil Nadu. The Dean encouraged everyone to buy tickets which are available at the welcome desk.

‘We are very grateful that you have chosen the cathedral as a space for this exhibition,’ he told Adrienne. ‘One of the cathedral’s biggest tasks is to transform the visitor into a pilgrim, to enable them to experience the transcendent and the divine God. It is noticeable that when visitors to the cathedral saw the exhibition last year, automatically a silence fell and a prayerful mood was created.’

The proceeds of sales made during the exhibition will go to a registered charity nominated by the purchaser. Sales of the icons on the opening night will be donated to one of four charities nominated by the artist. 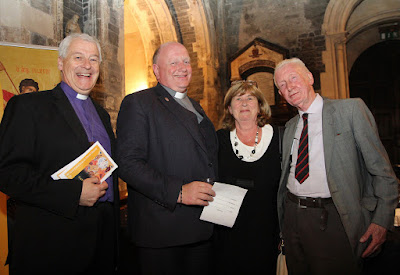 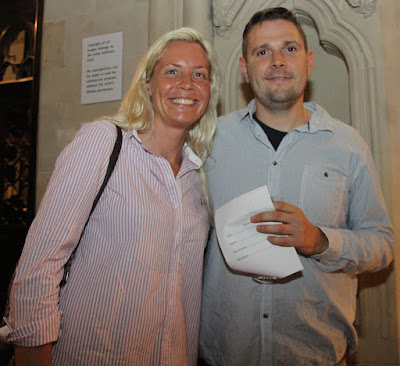 Michelle and Jason Lord, the iconographer’s children, at the launch of the Icon exhibition in Christ Church Cathedral