‘Throw him into the outer
darkness, where there will be
weeping and gnashing of teeth’ 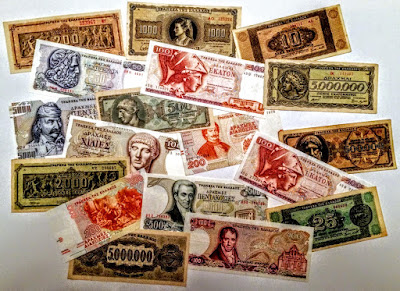 The Second Sunday before Advent (Proper 28)

In our Gospel reading this morning, Christ continues to tell parables about the kingdom of heaven. In the previous parables, we have been told to be prepared for the Second Coming at all times.

The parable this morning is set in the realm of finance. Before leaving on a journey, a master entrusts his servants (that word deacon again) with his money, each according to his ability.

At the time, a talent (τάλαντον, tálanton) was a lot of money – enough to make any one of those slaves a millionaire, and enough to make them fret and worry about the enormity with which he had been entrusted.

Earlier in Saint Matthew’s Gospel, we have come across another parable of talents, when a servant who is forgiven a debt of 10,000 talents refuses to forgive another servant who owes him only one hundred denarii (Matthew 18: 21-35, 17 September 2017).

This morning, two servants invest the money they have been entrusted with and earn more, but the third simply buries it.

When the master returns, he praises the investors. He says they will be made responsible for many things, and will enter into the joy of your master.

That darkness into which he is condemned has a dread that is also echoed in Saint Paul’s warning this morning, ‘For those who sleep sleep at night, and those who are drunk get drunk at night’ (I Thessalonians 5: 7).

‘For those who sleep sleep at night, and those who are drunk get drunk at night’ … I Thessalonians 5: 7 (Photograph: Patrick Comerford, 2017)

The catchphrase ‘Loadsamoney’ and the character to go with it were part of the sketches created by the English comedian Harry Enfield on Channel 4 in the 1980s.

Loadsamoney was an obnoxious, Cockney plasterer who constantly boasted about how much money he had to throw away. The character took on a life of his own and adapted the song ‘Money, Money,’ from the musical Cabaret, for a hit single in 1988 and a sell-out live tour.

On the other hand, we all know people who are reluctant to flash their cash and would prefer to stash their cash. We have all heard of people who kept their savings in a mattress, thinking it was safer there than in the bank.

They may never have realised how right they might have been in the past decade. But leaving your money under the mattress is not going to put it to work. And, these days, putting your money on deposit in the bank may cost you money rather than earning it. With low deposit rates and taxation at source, you may end up collecting less than you had when you first opened that savings account.

But piling my money up has its risks too. At a time of rapid inflation in war-time Greece and Germany, people who saved their money as banknotes found it quickly depreciated in value. I have enough 5 million Drachmai notes in a tiny stash to make two sons multi-millionaires. Sad to say, those notes date from the 1940s, and the only value they have is curiosity value. 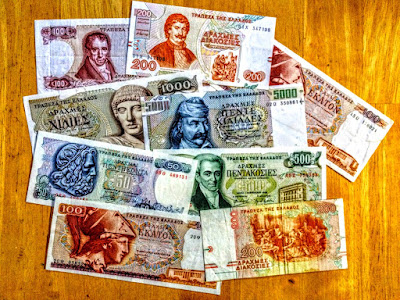 Is this morning’s parable less about talents and money and more about those who are exploited in the world by others and who are left destitute? (Photograph: Patrick Comerford, 2017)

What would have happened to the two investors in our Gospel reading this morning if they took risks with those vast sums of money only for their master to discover that they had they lost everything?

What if this bondholder had been burned because of the folly of two of his risk-takers, and only one had been a careful steward?

After all, a rabbinical maxim commends burying money to protect it.

If this parable is about the kingdom of heaven, if the master stands for God and the servants for different kinds of people, what lessons does it teach us?

What was the third slave doing with his time after he buried his talent?

Was he doing any other work on behalf of the master?

In his refusal or indolence, did he show disdain for his master?

Or are they God’s?

Is my relationship with God one of trust and gratitude?

Or do I fear God to the point of thinking of God as the source of injustice? 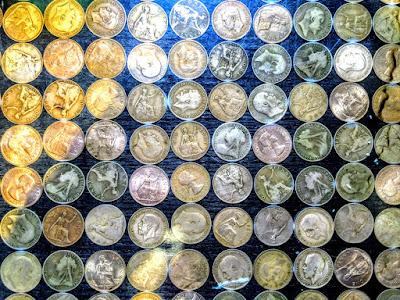 ‘To one he gave five talents, to another two, to another one, to each according to his ability’ (Matthew 25: 15) … old coins in a table top in the bar at the Hedgehog in Lichfield (Photograph: Patrick Comerford, 2017)

An alternative reading of this parable might question the behaviour of the master, as we have done with the passage a few weeks ago (15 October 2017) about the invitation to the wedding banquet (Matthew 22: 1-14).

In an alternative reading, we could see here an absentee landlord who does no work himself, but lives off the labour of his slaves, even at the expense of other more honest people. He would be seen to those who hear Christ telling this parable for the first time as greedy and grasping rather than smart or virtuous.

The master tells the slave he treats most harshly that the punishment is specifically for refusing to break the commandment against usury (Matthew 25: 27), a practice consistently condemned in both the Old Testament and the New Testament.

When Christ says ‘to all who have, more will be given, but from those who have nothing, even what they have will be taken away’ (verse 29), is he, instead of teaching a lesson, expressing in an exasperated way the old maxim that ‘the rich get richer, and the poor get poorer’?

Is the behaviour of the master in the parable something that God would commend, let alone imitate?

Is this the kind of behaviour that Christ expects of God’s people?

Could the servant who is thrown out, like the poor guest at the wedding banquet who is shamed and victimised before who is thrown out into utter darkness, bound hand and foot, represent the Suffering Servant?

Could the lesson be not to use and misuse what is not ours for selfish gain as we exploit others?

Could it be that this parable is still less about justifying those who make unimaginable wealth out of the labour of others?

Is it less about talents and money and more about those who are exploited in the world by others and who are left destitute?

Reading the parable this way would leave us wanting to be less like the master who is a symbol of all who are successful and ‘make it’ in the world, who have ‘loadsamoney’ and leave us more interested in the values of God’s kingdom, praying that it will come and that God’s will is done on earth as it is in heaven.

If so, then what sorts of risks should we take for the sake of the Kingdom?

Or do we keep on devoting our lives to the values of the kingdoms of this world?

We shall explore more of this next Sunday [26 November 2017], when we reflect on the meaning of the Kingship of Christ, and then through the four Sundays in Advent in the month of December as we prepare for the coming of Christ, not just as the Christ Child at Christmas, but the coming of Christ again and his kingdom.

Some old coins from classical Greece … what was the value of a talent? (Photograph: Patrick Comerford)

(Revd Canon Professor) Patrick Comerford is Priest-in-Charge, the Ratkeale and Kilnaughtin Group of Parishes. This sermon was prepared for Sunday 19 November 2017