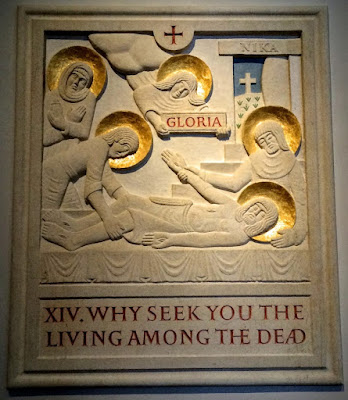 Nicodemus and Joseph of Arimathea, watched by the Virgin Mary, lay the Body of Christ in the tomb … Station XIV in the Stations of the Cross in Saint Mel’s Cathedral, Longford (Photograph: Patrick Comerford)

It is Mothering Sunday, or Mother’s Day today. And although there is no obvious reference to mothers, mothering or even Mother Church in our lectionary readings this morning, it would be remiss of me not to speak about this theme this morning, and not to refer to some of the reactions to a speech last Thursday, on International Women’s Day [8 March 2018] by one of the nation’s leading mothers, the former President Mary McAleese.

I have a passing acquaintance with Dr McAleese. We are not good friends, although we did work together on a number of television programmes in the distant past, and while she was President she was very welcoming at Áras an Uachtaráin to a group of Egyptian religious leaders, Anglican and Muslim, I had brought to visit Ireland.

Later, we met again, when she invited to me to lunch at Áras an Uachtaráin while she was President, and since then we have met occasionally, mainly at Christ Church Cathedral, Dublin, where she has preached at ordinations and where she was installed as an honorary lay canon late last year.

Last week, Cardinal Kevin Farrell tried to veto her speaking in the Vatican at a conference organised by Voices of Faith. The organisers bravely responded. Instead of accepting that the Vatican was the venue for their conference, and accepting the restrictions on them as guests, they moved the venue, as they say ‘outside the walls,’ to another location in Rome.

The Church of Ireland agreed to the ordination of women as priest and deacons almost 30 years ago in 1990. So many of the arguments put forward by President McAleese last week many seem like old hat to many of us this morning.

But there are still men in the Church of Ireland, some of them ordained, who are opposed to the ordination of women, certainly opposed to the ordination of women as bishops. And it took almost quarter of a century for a woman to be elected a bishop in the Church of Ireland, when Pat Storey was elected and consecrated Bishop of Meath and Kildare in 2013.

So, when Mary McAleese criticises her Church for being patriarchal in its structures and for being misogynistic, there is no room for complacency on our part in the Church of Ireland. 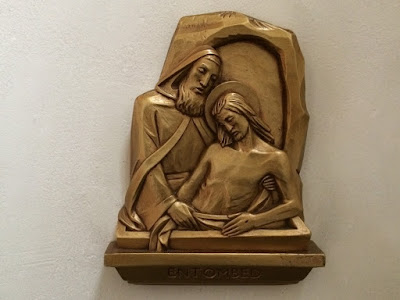 ‘Go, make the tomb as secure as you know how’ ... Christ is laid in the tomb by Nicodemus, from the Stations of the Cross in the Chapel of Saint John’s Hospital, Lichfield (Photograph: Patrick Comerford)

It is easy for men to find men who are role models for male priests. One good example is Nicodemus in our Gospel reading this morning (John 3: 14-21).

Nicodemus only appears in Saint John’s Gospel, and this is the first of his three appearances. He is a leading Jew of the day, a Pharisee and a rabbi, a doctor of the law, a member of the ruling Sandhedrin. He comes to visit Jesus at night, and he comes with a bundle of questions.

But, despite his erudite learning, he finds it difficult to understand the answers Christ gives to his questions. Yet, it is all so simple: ‘God so loved the world …’ (verse 16).

In fact, what Jesus is saying here is deeply profound. The Greek mathematician and philosopher Pythagoras was born on the island of Samos, the neighbouring island of Patmos, the island where Saint John spent his time in exile.

Most of us know about Pythagoras since our schooldays because of his calculations about right-angle triangles.

But he also provides an insight into one of the key concepts in Saint John’s writings. His understanding of the cosmos (κόσμος) includes the earth, the planets, the stars, the whole created order. It is an idea derived from the mathematician and philosopher, Pythageros of Samos.

It is as if everything is wrapped into and lives within God’s skin. To put it more simply on Mothering Sunday, we live in God’s womb, and it is there that God loves us.

Nicodemus brings a mixture of myrrh and aloes, estimated at about 33 kg, to embalm Christ’s body. In his book Jesus of Nazareth: Holy Week, the former Pope Benedict XVI observes that ‘the quantity of the balm is extraordinary and exceeds all normal proportions. This is a royal burial.’ 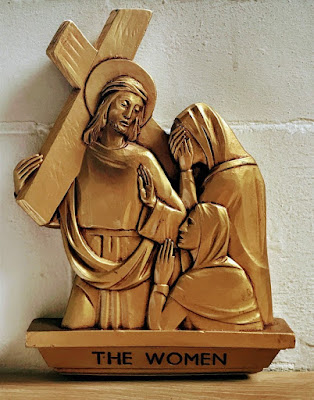 But on the road to Calvary, Christ meets women on their own or in groups.

In Station 4 in the traditional Stations of the Cross, Christ meets his Mother, the Virgin Mary. How she must have recalled when she brought him as a babe in her arms to the Temple, and how the old man Simeon told her ‘a sword will pierce your own soul too’ (Luke 2: 34-35). She too has presented Christ to the world, and now presents the world to Christ.

Veronica is not recorded in the Gospel stories. But traditionally, at Station 6 in the Stations of the Cross, she wipes the brow of Christ with her veil, and her veil is left with an impression of Christ’s face. She holds up the face of Christ to the world, holds up the Body of Christ, just as the priest does at the Eucharist or Holy Communion. She too is a woman who is a model of priesthood.

At Station 8, the weeping women of Jerusalem meet Christ. It is a moment recalled by Saint Luke alone. There Christ thinks less of his own plight than he does of the future facing these women, whether they are mothers or not as he tells them, ‘Daughters of Jerusalem, do not weep for me, but weep for yourselves and for your children’ (Luke 23: 26-35).

He sees their plight, and responds by showing what the Gospel truly means, what the Kingdom of God is truly like. In the Mothers of Jerusalem, the world is presented to God through Christ, and Christ commissions, if you like ordains them, to live out his concerns for the world.

The only man at the Cross on Good Friday, apart from those who condemned Christ and two thieves, is Saint John the Beloved Disciple (John 19: 26).

Mary McAleese has been accused on all the talk shows for the past three days by her detractors, of making arguments for the ordination of women that are emotive and that are based on secular concepts of equality.

But if the Cross does not give us permission to be emotional, what does?

And in God’s love for the whole cosmos, there is profound equality. In Christ there is no us and them, there is only us.

The women who meet Christ on the path to Calvary, the group of women who gather to bury Christ after crucifixion, present God in Christ to the world, and present the world through Christ to God.

In the Roman Catholic Church, in the Orthodox Church, and in many parts of the Anglican Communion, priests are often called ‘Father.’ But the road to Calvary also tells us, on Mothering Sunday, on this the Fourth Sunday in Lent, that there are many good reasons why all the Churches should have a good balance of priests who are also called ‘Mother.’

Stay with me in this Lenten journey with Christ so that we can rejoice on Easter Day.

This sermon was prepared for the Fourth Sunday in Lent, 11 March 2018 (Mothering Sunday) 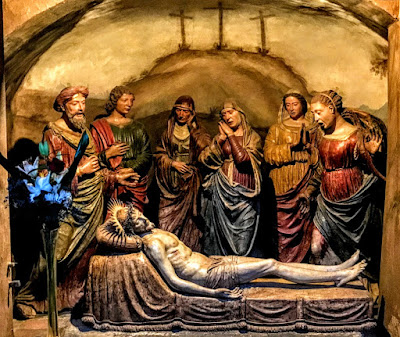 The Collect of the Day (the Fourth Sunday in Lent):

The Collect of the Day (Mothering Sunday):

630, Blessed are the pure in heart
642, Amazing grace, how sweet the sound!
484, Lift high the cross, the love of Christ proclaim