A lost mediaeval cathedral
and tales of Hanibal,
Helen and artists in Elne 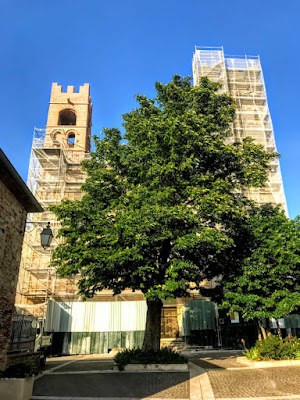 Elne was the centre of a diocese from the sixth century and the cathedral was built in the eleventh century (Photograph: Patrick Comerford, 2018)

Earlier this week, I had explored the Cathedral of Saint John the Baptist in Perpignan. But this was not the first cathedral of the diocese, and so on Thursday evening [17 May 2018], after an afternoon by the sea at Collioure, three of us made our way up through the hills and narrow streets of Elne to visit the Cathedral of Sainte-Eulalie-et-Sainte-Julie.

From its lofty, fortified site, Elne (Elna) dominates the narrow plain of Roussillon between the Pyrenees and the Mediterranean. This was the first capital of the former province of Roussillon, before the provincial capital was moved to Perpignan.

Elne is the oldest town in Roussillon and successive civilisations have left their traces here. Numerous archaeological researches have shown that the surrounding countryside has been occupied since Neolithic times.

As Illiberis, the place is first mentioned in the history of Livy. This is the Iberian city where Hannibal pitched camp after he crossed the Pyrenees in 218 BC, and here he negotiated his safe passage through Gaul on the way to Italy.

However, in the first century AD, Pliny said this was no more than ‘a modest vestige of a hitherto great city.’

In the fourth century, Illiberis became Castrum Helenae, named after Saint Helen, the mother of the Emperor Constantine. Constans, the son of Constantine, was assassinated within the walls of the city in 350 AD.

When southern Gaul was divided in 462, Elne became one of the ‘seven cities’ of Septimania.

A bishopric was established in the city in the sixth century, and the first-known Bishop of Elne, Dominus, is mentioned in 571 in the Chronicle of John of Biclarum. The Bishop of Elne attended the Council of Toledo in 599, and the bishops of Elne called many synods.

When the Arabs crossed the Pyrenees in 719, Elne was one of the first towns they attacked. When the Counts of Roussillon achieved independence, Perpignan became the capital of the county, but Elne remaining the Episcopal city.

The Bishop of Elne called the Synod of Toulouges in 1027, which upheld the ‘Peace and Truce of God.’ 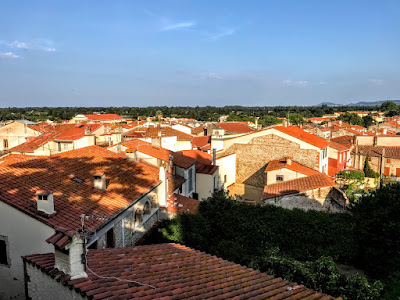 A view of the rooftops of Elne from the balcony behind the cathedral (Photograph: Patrick Comerford, 2018)

The present cathedral of Sainte-Eulalie-et-Sainte-Julie was built later in the 11th century and the high altar was consecrated in 1069. The Romanesque cloister was built in the 12th to 14th centuries. The cathedral and the cloister are rich examples of elaborate mediaeval ornamentation.

During the Aragonese Crusade instigated by Pope Martin IV, Elne was plundered in 1285, the cathedral was set fire and the people of the town who had taken refuge inside the cathedral were massacred by the French troops of Philip III.

During the later Middle Ages, Elne was increasingly overshadowed by the growing prosperity of nearby Perpignan. The Counts of Roussillon moved their seat from Elne to Perpignan.

The people of Elne revolted against French rule in 1472. The town was besieged yet again, was conquered and the leader of the revolt, Bernat d’Oms, was beheaded in 1474. Elne and the rest of Roussillon were returned to the Kingdom of Aragon in 1493. 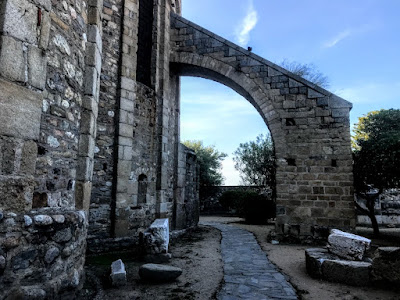 Entering the cloisters at the cathedral in Elne (Photograph: Patrick Comerford, 2018)

Later Bishops of Elne included members of the Sforza and Borgia families, including Cardinal Ascanio Maria Sforza (1494-1495), Cardinal Caesar Borgia (1495-1498), and Cardinal Francisco Lloris y de Borja (1499-1506). After becoming Bishop of Elne in 1495, Caesar Borgia decided to raise the taxes on the clergy, resulting in an uprising in 1497. After the clergy complained to the king, these taxes were halved the following year.

The episcopal seat was transferred to Perpignan finally in 1601 under a Papal Bull issued by Pope Clement VIII.

Elne came under siege from the French again in 1641, and after the Treaty of the Pyrenees in 1659 it was formally ceded to France. The mediaeval ramparts were partly destroyed in 1680 on the orders of Louis XIV.

The artist Etienne Terrus and the sculptor Aristide Maillol lived in Elne in the 20th century and the studio of Terrus, which was visited by Henri Matisse and André Derain while they were painting in Collioure, and Terrus is associated with the birth of the Fauve movement.

Elne is now agricultural town but it also attracts about 70,000 visitors each year. 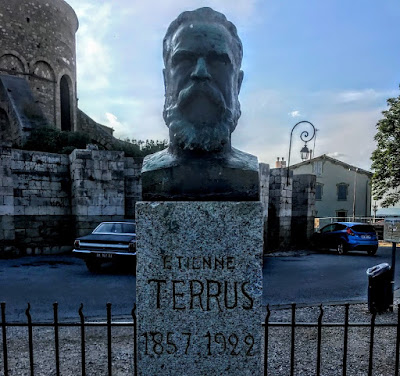 the studio of Etienne Terrus in Elne was visited by Henri Matisse and André Derain (Photograph: Patrick Comerford, 2018)