Searching for the seven
mediaeval castles of Dalkey 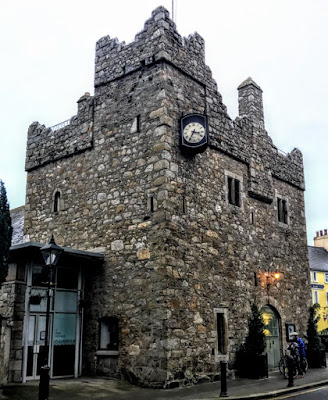 I started the New Year as I mean to continue 2019, with a brisk walk by the sea on the East Pier in Dun Laoghaire.

But first, two of us went for a walk yesterday afternoon [1 January 2019] through the narrow streets of Dalkey, Co Dublin, and along the Main Street, in search of a café that was open on New Year’s Day.

Instead, we ended up searching for the seven mediaeval castles that were said to have once lined Castle Street, the main street. The best-known of the seven castles of Dalkey is the Goat Castle or Dalkey Castle, which once served as Dalkey’s Town Hall, and is now Dalkey Heritage Centre. The only other surviving castle on Castle Street is Archbold’s Castle.

The five other castles named on visitor boards in the town were: Dungan’s Castle, Yellow Castle, Wolverton Castle, House Castle and Black Castle.

Dalkey takes its name from Dalkey Island. Originally in Irish, it was named Deilg Inis, meaning Thorn Island. This was later changed to Deilg-ei by the Vikings, to Dalk-ei by the Normans, and later anglicised to Dalkey.

One of the earliest sites in Dalkey is Saint Begnet’s Church and graveyard, beside Dalkey Castle and opposite Archbold’s Castle. This is one of two churches in the area dedicated to Saint Begnet, a local saint – the other is on Dalkey Island.

A wooden church stood on the site from the sixth or seventh century. The earliest part of the current stone church, dates from the tenth century. Various additions to the church over the centuries include: the twin bell tower, the chancel and chancel arch in the 13th century.

The boundary walls of the church are modern, but much of the surviving structure is Anglo-Norman. The east and west windows, the belfry and, possibly, some of the entrances and other parts of the fabric are late mediaeval, dating from the 15th or 16th century.

The church seems to have survived into the 17th century, but it was described in Archbishop Bulkeley’s visitation of 1630 as ruinous with no roof on the chancel.

The area around the church may have been used as a burial ground from the 13th century. Most of the burials were in unmarked graves. It is said that up to 2,000 people were buried in here over the centuries. The earliest stone is of a man called Cornelius in 1738. The most recent is Kavanagh in 1930.

Dalkey grew as a small village around Saint Begnet’s Church. Its later growth and importance were influenced by the anchorage provided for large Anglo-Norman ships in Dalkey Sound.

In the Middle Ages, Dalkey served as the port for Dublin, and large ships anchored and unload their cargoes in the deep, sheltered waters of Dalkey Sound. The seven castles or fortified town houses were built along Castle Street from the 1390s on to store goods unloaded in Dalkey.

The Dalkey castles seem to be somewhat smaller than their contemporaries in other towns, and they were less ornamented. They were used primarily for storage and defence. Such buildings could also indicate wealth and prestige.

The castles in Dalkey may have been improved and rebuilt under a 15th century act that provided a grant of £10 was offered to build castles to defend the Pale. The castles all had defensive features to protect goods from being plundered, including machicolations, murder holes, battlements and arrow-loop windows. 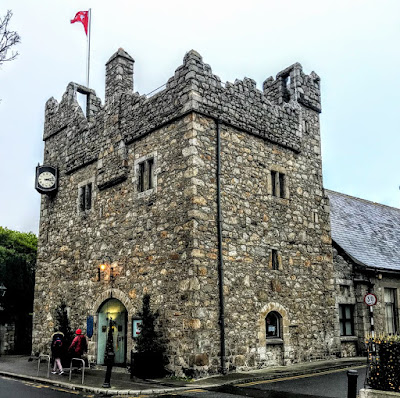 Dalkey Castle was called the Castle of Dalkey in the Middle Ages. Later, in the mid to late 17th century, it was called Goat Castle when it was the property of the Cheevers family of Monkstown Castle.

It retains a fine example of barrel-vaulted ceiling and traces of the wicker work that supported it. Niches have been exposed on the walls where precious goods may have been stored. The castle is now the integral entrance to both the Heritage Centre and Dalkey Town Hall.

The former living quarters upstairs became a meeting room for the Dalkey Town Commissioners in 1869. It continued as a meeting room until 1998 when it was incorporated into Dalkey Castle and Heritage Centre. 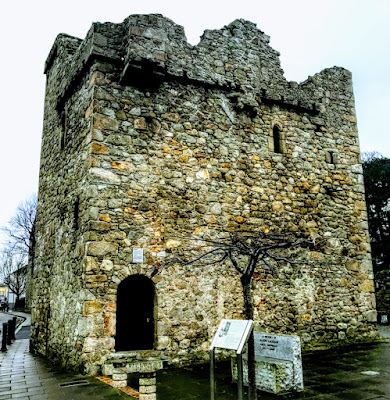 Archbold’s Castle is not open to the public but is in a good state of repair, apart from the battlements.

The only families recorded as being associated with them date from the late 16th century. John Dungan was a merchant and government office-holder and the Barnewalls and Walshes were local gentry. The Talbot family of Feltrim and Templeogue also held property with interests in Dalkey from the early 13th century.

John Dungan, second remembrancer of the exchequer, held this castle in 1585. James Kennan leased this castle for 21 years in 1645 for 30 shillings. This lease shows the castle was on the south side of Castle Street and can reasonably be assumed to be the one now known as Archbold’s Castle.

The castle was recovered by the Dungan family at the Caroline Restoration, but they lost it again at the Williamite confiscations. 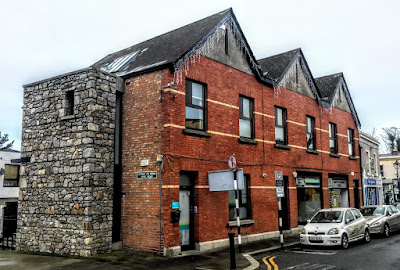 Dungan’s Castle was one of two castles at the west entrance to Dalkey (Photograph: Patrick Comerford, 2019)

The entrance to the west of Dalkey was through a gateway secured by two castles of which few or no traces remained, Dungan’s Castle and Yellow Castle.

Dungan’s Castle, on the corner of Castle Street and Hyde Road, was the family home of the Dungan family, who held the title of Earl of Limerick and also owned Archbold’s Castle.

The title of Earl of Limerick was given to Sir William Dongan, 4th Baronet in 1686, with remainder, failing sons of his own, to his brothers Robert, Michael and Thomas and the heirs male. He was made Viscount Dungan, of Clane in Co Kildare, at the same time.

An inquisition later found that William Dungan, Earl of Limerick, had two castles, six messuages and gardens, seven acres of arable land together with meadow and pasture, totalling 74 acres, in Dalkey.

His only son Walter Dungan, Viscount Dungan, was killed at the Battle of the Boyne and Lord Limerick was succeeded according to the special remainders by his brother Thomas Dongan, 2nd Earl of Limerick, who was Governor of New York from 1683 to 1688. All three titles became extinct when he died in 1715. 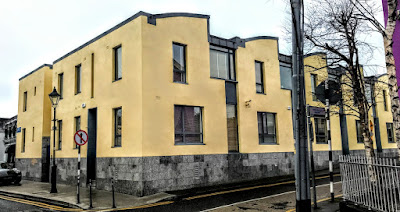 The Yellow Castle stood opposite Dungan’s Castle, on the corner of Castle Street and Dalkey Avenue (Photograph: Patrick Comerford, 2019)

The Yellow Castle stood opposite Dungan’s Castle, on the corner of Castle Street and the present Dalkey Avenue. 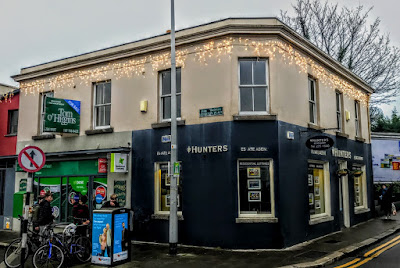 Wolverton Castle stood on what is now the corner of Castle Street and Ulverton Road. It was used as a forge in 1818.

Tudor House off Castle Street, was built by a Dublin surgeon, Dr Richard Parkinson, who bought the land in 1843. To complete his new house, he bought Wolverton Castle, one of the seven original tower house castles of Dalkey, and used the castle’s granite boulders to build his grand and imposing house. 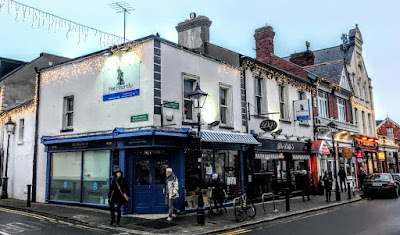 House Castle stood where Nos 24-25 Castle Street now stands, on the corner of what is now Saint Patrick’s Road. 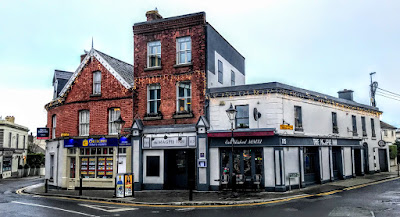 Black Castle, at the junction of Castle Street and Railway Street, was once owned by King James II. Some of the castles in Dalkey were the property of the Walshe and Barnwell families. Their history during the Cromwellian era and after the Caroline Restoration settlements is difficult to trace, but James, Duke of York, later King James II, acquired extensive properties in Dalkey at the Restoration.

The existence of east and west gates predicates some form of walling on those sides, perhaps more rudimentary than the southern rampart and not extending very far in a northerly direction.

John Allen of Stillorgan bought 19 acres in Dalkey in 1703, including four castles and several cabins formerly the property of King James, all for £151. So Dungan’s two castles and King James II’s four castles amount to at six castles still standing in Dalkey at the end of the 17th century.

Brooking’s map of the bay and harbour of Dublin, published in 1728, shows Dalkey as a fortified ring, perhaps intended to indicate walls. But this may be a flight of fancy on the mapmaker’s part. The walls were gone by 1770 but there may have been slight remains of the west gate.

Writing in 1768, Wilson mentions seven castles in Dalkey. He describes six and says the seventh castle had been demolished some years previously. Lewis found three castles in use in 1837, one as a private house, the other two as a store and a carpenter’s shop.

The 1843 Ordnance Survey map shows five castles, one to the east of the ruined church, which is clearly the Goat Castle, later the Town Hall, another site further east, a castle and a site to the west of the church and a castle on the south side of Castle Street, which is Archibold’s Castle.

Today, Dalkey Castle or Goat Castle is the only one of Dalkey’s seven castles open to the public, and Archbold’s Castle is still standing though not in use or open to visitors. We found the sites of the other five castles following the signs on Castle Street and the marks on the streets and the movements. 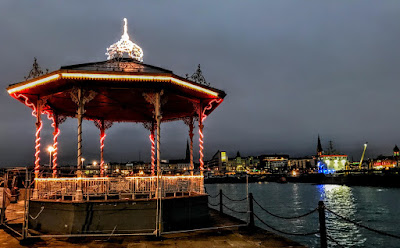 After exploring the castles of Dalkey I went for a walk on the East Pier in Dun Laoghaire (Photograph: Patrick Comerford, 2019)