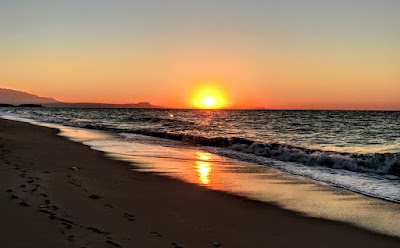 ‘O Sun, O Christ ... Thou pawnest Heaven as a pledge for Earth’ … sunset on the beach at Platanes near Rethymnon in Crete (Photograph: Patrick Comerford)

In our Gospel reading this evening (John 13: 21-32), we are at the Last Supper, and Jesus has finished washing his disciples’ feet.

He now tells them that one of them is about to betray him. He then tells Judas Iscariot to go and do quickly what he is planning to do.

Although another poem by Plunkett, ‘I see his blood upon the rose,’ is well-known, Plunkett’s work as poet is often overshadowed by the memory of his role in the Easter Rising in 1916.

He was the son of Count George Noble Plunkett (1851-1948), curator of the National Museum of Ireland, and Josephine Cranny (1858-1944), Countess Plunkett. He was born on 21 November 1887 at 26 Upper Fitzwilliam Street, Dublin, an elegant Georgian house on the Fitzwilliam or Pembroke estate, close to Merrion Square, Fitzwilliam Square and Saint Stephen’s Green.

He was sent to school in Dublin at Catholic University School and the Jesuit-run Belvedere College, before going to the Jesuit-run English public school, Stonyhurst.

In England, he studied the mystics Saint John of the Cross, Saint Theresa of Avila, and Saint Francis de Sales, and their influence permeates his poetry, although, in a short article on ‘Obscurity and Poetry,’ he later applied the term ‘mystic’ to but a very small part of his own verse.

Back in Ireland, he became friends with Thomas MacDonagh and Padraic Pearse at Saint Enda’s School, Rathfarnham. Like him, they would become signatories of the 1916 Proclamation. But ill-health made him inactive for much of his life, and he spent many winters abroad. He and his mother spent a winter travelling in Italy, Sicily and Malta, and he spent another winter in Algiers, where he studied Arabic literature and language.

When he returned from Algiers, he lived in Donnybrook, but apart from MacDonagh and Pearse he had few other literary friends in Dublin until he became interested in the Irish Review, whose contributors included James Stephens, Thomas MacDonagh and Padraic Colum, who was editor in 1912-1913. Two of his poems were published in the Review, and he became editor in June 1913.

Along with MacDonagh and Edward Martyn, he also co-founded the Irish Theatre in 1914.

In 1916, he was one of the signatories of the Proclamation. He was imprisoned in Richmond Barracks. Shortly before his execution in Kilmainham Jail on the morning of 4 May 1916, he married his fiancé, Grace Gifford (1888-1955), in the jail chapel. His friend, Thomas MacDonagh, who married Grace’s sister, Muriel, was executed the day before. Grace was a member of the Church of Ireland, but she and Joseph had planned to marry in University Church, Saint Stephen’s Green. He was 28 when he died.

Two volumes of Plunkett’s poetry were published: one in 1911 and the other posthumously. They include many immature poems, but also some lasting poems he later counted among his mature work, including ‘White Dove of the Wild Dark Eyes,’ the sonnet ‘I Saw the Sun at Midnight, Rising Red,’ the poems ‘1867,’ ‘I See His Blood Upon the Rose,’ ‘My Soul is Sick with Longing,’ and ‘The Stars Sang in God’s Garden.’

This evening’s poem, which is a deep meditation on the love of God, was also included in The Oxford Book of English Mystical Verse (Oxford: The Clarendon Press, 1917), edited by DHS Nicholson and AHE Lee. 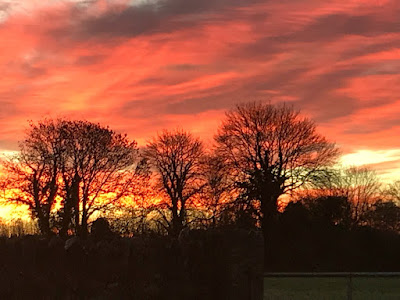 ‘I saw the Sun … rising red … heavy with the stain of blood-compassion’ … a sun-streaked sky at the Rectory in Askeaton before sunrise (Photograph: Patrick Comerford)

I saw the Sun at Midnight, by Joseph Mary Plunkett

I saw the Sun at midnight, rising red,
Deep-hued yet glowing, heavy with the stain
Of blood-compassion, and I saw It gain
Swiftly in size and growing till It spread
Over the stars; the heavens bowed their head
As from Its heart slow dripped a crimson rain,
Then a great tremor shook It, as of pain –
The night fell, moaning, as It hung there dead.

O Sun, O Christ, O bleeding Heart of flame!
Thou givest Thine agony as our life’s worth,
And makest it infinite, lest we have dearth
Of rights wherewith to call upon Thy Name;
Thou pawnest Heaven as a pledge for Earth
And for our glory sufferest all shame. 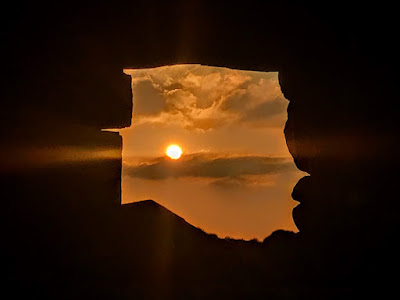 ‘The night fell, moaning, as It hung there dead’ … sunset seen through the church ruins at Kilconly in north Co Kerry (Photograph: Patrick Comerford)