Seven Last Words (1): ‘Father, forgive them;
for they do not know what they are doing’ 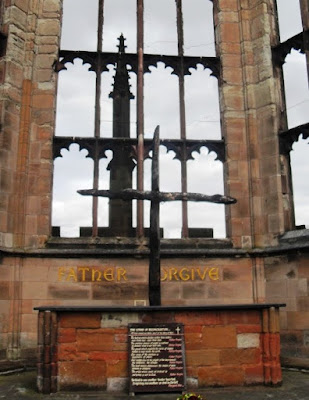 ‘Father Forgive’ ... The Cross of Nails on the altar in the ruins at Coventry symbolises the Ministry of Reconciliation at Coventry Cathedral (Photograph: Patrick Comerford)

The words: ‘Father, forgive them; for they do not know what they are doing.’

The Dominican author and theologian, Timothy Radcliffe, points out that that in the Bible, seven is the number of perfection.

We know of the six days of creation and how God rested on the seventh. In Saint John’s Gospel, we have seven signs and seven ‘I AM’ sayings disclosing for us who Jesus truly is:

The seven signs in Saint John’s Gospel are:

In the book of Revelation, we have the seven churches and the seven seals. And I could go on.

This afternoon, on this Good Friday, we are going to think about, mediate on, contemplate, reflect on, and be guided by the Seven Last Words of Christ on the Cross.

In his book, Seven Last Words (London: Burns & Oates, 2004), Timothy Radcliffe interprets the seven last words of Christ on the Cross on Good Friday as God’s completion of the circle of creation.

And of course, we should see in God’s word both the beginning and the completion of creation. As Saint John’s Gospel opens: ‘In the beginning was the word.’

As we begin to reflect on these seven last words, we should notice who Christ is speaking to from the cross: in the first, fourth, and seventh words, Christ addresses his Father; in between, in the second and third, and the fifth and sixth words, Christ speaks to us.

This first saying of Christ on the cross: is ‘Father, forgive them; for they do not know what they are doing.’ This saying is traditionally called ‘The Word of Forgiveness.’

We can see this saying as Christ’s own prayer for forgiveness for those who are crucifying him: the Roman soldiers, and apparently for all others who were involved in his crucifixion.

Many of the early Biblical manuscripts omit this verse, Luke 23: 34. But then, I suppose, it is easy to omit forgiveness, to fail to extend it and to refuse to accept it, in our lives.

We know how trite, how hurtful, how deeply wounding, people can be when it comes to forgiveness.

In abusive relationships, how often does the abuser say to the spouse or the child who speaks out, who seeks redress, who demands justice: ‘Why can’t you simply forgive and forget?’

Forgetfulness is not the same as forgiveness. Nor should we link the two together.

And we all know how easy it is to refuse to extend forgiveness to someone who recognises the wrong they have done, the injury they have inflicted and who seeks forgiveness.

How often, when someone says ‘Sorry’ have I heard myself saying something along the lines of: ‘Sorry is easy ... Sorry is a very short word for a very long time of hurt ... If only you knew what you had done to me, you would not just be saying Sorry.’

How often do we feel leaving someone begging for forgiveness, even without forgiveness, gives us a sense of righteous fulfilment?

And how often we love to be in control, in power, to use that control and power?

On the cross, Christ is no longer in control. He has emptied himself of everything and gives up all control over how he is going to die, how his body is going to be disposed of.

But he does not say: ‘I’ll wait on others to ask for forgiveness before I say, ‘Father, forgive them; for they do not know what they are doing.’

It is also difficult to forgive when I feel that I have no right to offer forgiveness. Can I forgive the Holocaust, the decades of murder in Northern Ireland, the decades of oppression and racism in South Africa, the murders on 9/11, ‘ethnic cleansing’ in the Balkans, or, more recently, attacks on innocent civilians, mothers and children, in the Gaza Strip, by Isis on Christians, Yazidis and a variety of Muslims, by far-right white supremacists on Jews in synagogues in Pittsburgh or Muslims in mosques in Christchurch?

But how can I forgive those great crimes of the past century when I was not a Jew in Auschwitz, a policeman in Armagh, a black African in Soweto, a worker in the Twin Towers, a Bosnian, Serb or Croat who lived through the horrors that came with the break-up of Yugoslavia, a Palestinian mother in the Gaza Strip, a Syrian or Iraqi refugee?

Yet the first call on my forgiveness may not be the major crimes of recent decades. Sometimes I am called not even to forgive those who have been offensive to me in word and deed, at work or at home.

When Christ calls out on the Cross, ‘Father, forgive them; for they do not know what they are doing,’ I know not what I have done and what I have left undone that has placed him there.

But whether I know or know not, he asks the Father for forgiveness for me.

And my response should be not to ask why, but to accept. I cannot hold back from accepting that forgiveness. I cannot try to hold power over God.

But Christ’s response is perfect, and that can be good enough for me, at least for today.

My response to God’s forgiveness should be generous acceptance. And in that I have freedom from all past hurts; all past offences and all hidden wounds are healed.

Lord Jesus Christ,
in your hour of agony,
you asked your Father’s forgiveness
for those who caused you pain.
Give us strength to love our enemies
and bless our persecutors,
that we may reflect your love to those around us,
for your mercy’s sake. Amen.

(Revd Canon Professor) Patrick Comerford is priest-in-charge, the Rathkeale and Kilnaughtin Group of Parishes. This is the first of seven reflections on ‘the Seven Last Words’ on Good Friday, 19 April 2019, in Saint Mary’s Church, Askeaton, Co Limerick.