Comerford House in
Galway looks neglected,
but all is not lost … yet 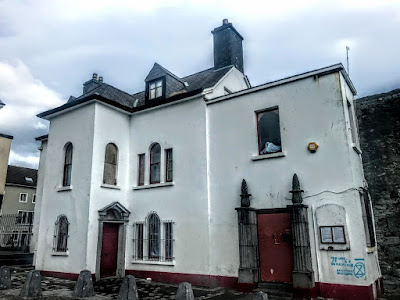 I spent much of yesterday [12 June 2019] with family members and cousins visiting Galway. Our walking tour of the city brought us through Eyre Square, to Saint Nicholas’s Collegiate Church, Shop Street, Kirwan Lane, Lynch’s Castle, Blake’s Castle, the King’s Head and the Spanish Arch, as well as many other historic sites in the centre of the city.

There was music and lively busking on the streets, and it was good to show first-time visitors to Galway from England that the ‘West is Awake.’ But it was sad to see the sorry, neglected state of Comerford House, beside Spanish Arch and the banks of the River Corrib, which was donated to Galway City by the Comerford family many years ago and which, for a time, had been the home of the Galway City Museum. 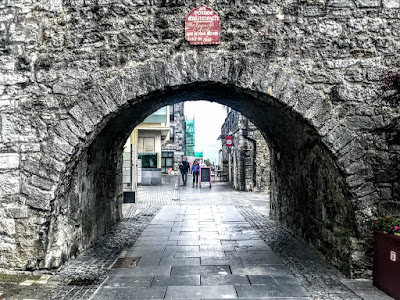 Spanish Arch, a 16th century part of the city walls, between Comerford House and the River Corrib (Photograph: Patrick Comerford, 2019)

William James Valentine Comerford, a solicitor from Tuam, Co Galway, was born in 1903. He qualified as a solicitor in February 1924, and started to practice in Tuam as Henry Concanon & Co. In 1954, he moved the practice to 9 William Street, Galway. At that time, he was in partnership with Frank Meagher.

William Comerford was also a well-known local historian in Co Galway, and he believed his branch of the Comerford family was descended from the Comerford family of Inchiholohan, Co Kilkenny. His historical papers included: ‘Some notes on the Borough of Tuam and its records, 1817-1822,’ in the Journal of the Galway Archaeological and Historical Society, vol 15, Nos 3 and 4 (No 19), pp 97-120 (no date, ca 1932-1933), and he was a founding member of the Old Tuam Society in 1942. He was the author also of an unpublished autobiography, ‘Harp sheds Crown.’

Bill Comerford moved to Comerford House, beside the Spanish Arch, in the 1950s, but when he retired in the 1970s he moved to Dublin, where he died.

Bill Comerford married Elizabeth Meagher and their children included: Dr Francis Rory Comerford, Vice-Dean of the Medical Faculty at University College Galway (now National University of Ireland Galway), and the father of Judge Francis Comerford, President to the Circuit Court; and Henry Comerford (1936-2016), a well-known Galway solicitor, a member of the Radio Éireann Players, who had two plays produced in the Peacock Theatre, and a Fine Gael candidate in the 1981 General Election.

Comerford House in Galway forms part of a National Monument site, the Galway City Walls, which is within a ‘Zone of Archaeological Notification.’

Comerford House in Galway is a detached three-bay, two-storey house with an attic storey, and was built ca 1800 as a private residence. It has a full-height, projecting square-plan entrance bay and a later flat roofed single-bay two-storey addition to south-west end of the façade.

Galway’s old City Wall forms a boundary to the small yard behind the house, and the south-west end of house is built onto and incorporates two of the northern arches of Spanish Arch, one of a series of arches of mediaeval gateways.

The Venetian-style windows at the end bays date from 1947. The entrance doorway has a carved limestone doorcase that includes panelled pilasters with plinths, a supporting moulded lintel and an open-bed pediment with a plain fanlight, and a replacement timber panelled door. The square-headed door at the addition has fluted flanking piers with plinths, and one pier retains a finial with acanthus leaves and a barley-sugar cone.

Clare Sheridan, a sculptor and cousin of Winston Churchill, lived in the house from 1948 to 1952 and converted one room into a private chapel. The doorcase came from Ardfry House. 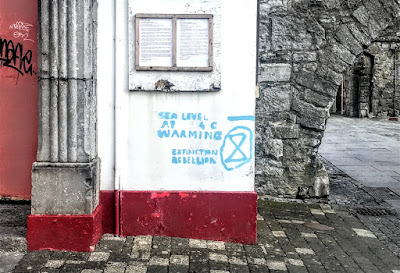 A flood warning on the walls of Comerford House, close to Galway Bay (Photograph: Patrick Comerford, 2019)

The Connacht Tribune reported late last year [17 September 2018] that unless Fáilte Ireland came up with at least €5 million towards the refurbishment and extension of the Galway City Museum into Comerford House and onto the top of the Spanish Arch, the flagship 2020 project would be dead in the water.

The cost of the project is significant because of the complexity of the site beside Spanish Arch, which is a national monument, Comerford House, which is a listed building and the River Corrib and looking out onto Galway Bay.

Graffiti on the corner of the walls of the house in the name of Extinction Rebellion warns how global warming and rising waters in the River Corrib and Galway Bay threaten the future of Comerford House.

However, there was some good news at Comerford House yesterday. A year-old site notice by Galway City Council on the building outlines the latest plans for Comerford House that include refurbishing the house, providing exhibition spaces, visitor and staff facilities, flood protection measures, a new attic storey, a new three-storey building north of Comerford House that would provide additional space for exhibitions, storage and visitors to Galway Museum, as well as new landscaping for Museum Square and in front of Comerford House, Spanish Arch and the Fish Market.

All hope is not yet lost for Comerford House in Galway. 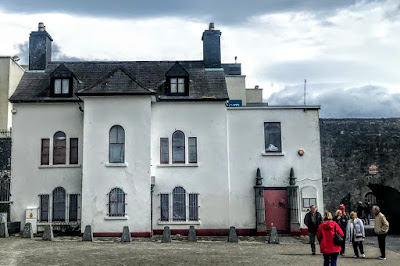 Comerford House in Galway was built an attic storey, and was built ca 1800 (Photograph: Patrick Comerford, 2019)

I thought you might be interested in the plans the tourist Board and Galway City Council have for Comerford house. It appears they are going to demolish it and replace it with a viewing Tower. This plan has been announced publicly.

Comerford house at the Spanish Arch is to be demolished and replaced with a tourist viewing tower. This has been announced publicly by the Tourist Board and Galway City Council. I thought this building was a protected building?