Finding the Seventy
on a street on the
way to Jerusalem

In search of the 70 on the way to Jerusalem … on Bridge Street, Cambridge (Photograph: Patrick Comerford, 2019)

I was in search of a photograph last week that would illustrate the story of the 70 in next Sunday’s Gospel reading (Luke 10: 1-11, 16-20), sent out in mission by Christ ahead of his journey on the road to Jerusalem.

I could find no speed signs for 70 kph on roads in Ireland or 70 mph in England – perhaps there are none, although they might have been suitable for a story about setting out on the road.

Perhaps then, I thought, I might find a number 70 on a house or a shop on the streets of Cambridge on Monday morning or on Wednesday morning, before and after this year’s conference of the Anglican mission agency USPG (United Society Partners in the Gospel) at High Leigh in Hoddesdon.

It was hard to figure out where No 70 Sidney Street was in Victorian Cambridge. The older houses and shops have gone, and they have been replaced with an arcade of shops that includes Boots.

It would have suited my purpose if the former No 70 stood at the place where two plaques mark Charles Darwin’s lodgings on Sidney Street for his first year as an undergraduate at Christ’s College. But nothing was clear about the numbering on this part of Sidney Street, and I had to press on.

But then, as I made my from Saint John’s College and the Round Church along Bridge Street towards the corner of Jesus Lane and Sidney Street and Sidney Sussex College, I came across Lindum House on 70 Bridge Street … a single doorway that I might have missed if I did not have this purpose in mind.

Discreetly located on the south-west side of Bridge Street, between 69 and 71 Bridge Street, the entrance archway to No 70 has with a good early 19th century Gothic door. In the yard behind, No 70 was once he Flying Stag, a former public house, built in 1842 of brick, but incorporating a timber framed 17th century cell and 18th century fragments.

The door was firmly closed, and had the look of not being opened for years. But I understand this is a three-storey and three-storey building with and attic ranges, sashes with glazing bars, and a tiled roof on an early lower build.

The house was formerly the ‘Freemasons’ Tavern. Until recent decades, the name and ‘Livery Baiting Stables’ was painted on the passage to it from Bridge Street.

Lilac Rose at No 71 Bridge Street has been part of the Cambridge shopping scene since 2010 (Photograph: Patrick Comerford, 2019)

Next door, and an integral part of this range, Lilac Rose is part of the group formed by Numbers 71 to 73. This is a shop that has been part of the Cambridge shopping landscape since 2010.

But No 71 has gone through many different functions. Charles Frederick Searle (28), a Cambridge-born medical practitioner, was here in 1911. Two years later, in 1913, he shared the premises with Moore’s Athletic Stores and Sports Depot, and a hairdresser’s and perfumer’s shop. By 1962, the shopfront was the premises of Coulson Horace and Sons, opticians.


So, perhaps, in my own strange way, I had found the number 70 on the way to Jerusalem. 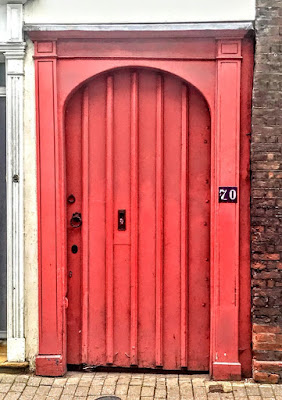