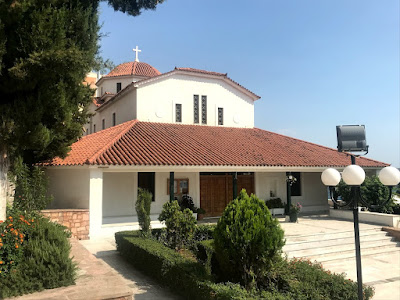 The Church of Saint Charalambos … a new, large Orthodox church in the centre of Saranda in southern Albania (Photograph: Patrick Comerford, 2019)

After visiting the site of the early synagogue in Saranda – one of the earliest synagogues in Balkan-Jewish history, I also visited a neighbouring church and nearby mosque.

Earlier in the afternoon, I had visited the Byzantine mosaics that survive in the 16th century hilltop Lekursi Castle, and in morning I had visited the former Byzantine basilica and baptistry further south in Butrint; this was therefore, , in every sense of the meaning, a ‘three faiths’ visit to southern Albania.

The City Mosque or Xhamia Sarandё is at Rruga Lefter Talo 167, in the heart of the city. It is a relatively small building in the traditional Albanian style, with one, tall slender minaret.

The size of the City Mosque compared with the much larger and more impressive Orthodox Church of Saint Charalambos is a clear indicator that this is a mainly Orthodox city. 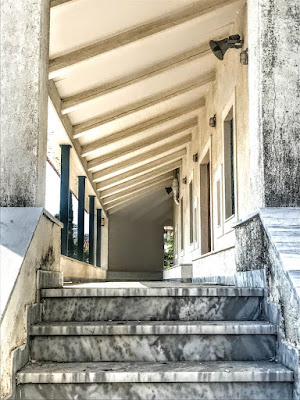 The cloister-like passage on the south side of the Church of Saint Charalambos (Photograph: Patrick Comerford, 2019)

Saint Charalambos (Ἅγιος Χαράλαμπος) was an early Christian bishop in Magnesia on the Maeander, a region of Asia Minor. His name Χαράλαμπος means ‘glowing with joy’ in Greek. He lived during the reign of Septimius Severus (193-211), when Lucian was Proconsul of Magnesia. It is believed that at the time of his martyrdom in 202, Charalambos was 113 years old.

The church had notices outside in both Albanian and Greek, also indicating that considerable Greek cultural and ethnic population survives in Saranda, although many ethnic Greeks have left this part of southern Albania – often known to Greeks as Northern Epirus – and moved to Greece.

The church was locked, however, as were the offices and school in the basement. On the other hand, the mosque was open, although there was no-one there to question our intentions as visitors. 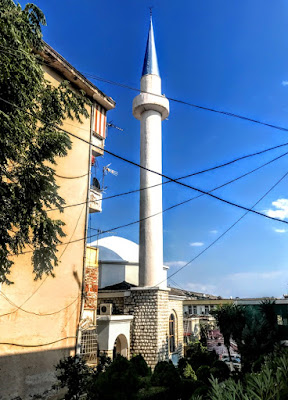 The City Mosque in Saranda with its slim minaret (Photograph: Patrick Comerford, 2019)

I took my sandals off and I went inside alone to spend a few moments in quiet and solitude. But I always feel that closed churches – including those in my own parish – are missed opportunities for hospitality, outreach and mission.

On the other hand, the open mosque seemed to confirm all the stories I was hearing this week of the religious tolerance and pluralism that have emerged in post-Hoxha Albania.

Enver Hoxha declared Albania the world’s first atheistic state in 1967. In a cultural revolution that mirrored events in China, the mosques of Albania’s majority Muslim population were ransacked and turned into storage depots or army barracks. Churches, both Orthodox and Roman Catholic, were torched.

Today, the four major faith groups in Albania are the Roman Catholics, the Orthodox Church, Sunni Muslims, and Bektashis. Although the Bektashis are little known outside the Balkans, their importance is much greater than their small numbers might suggest. 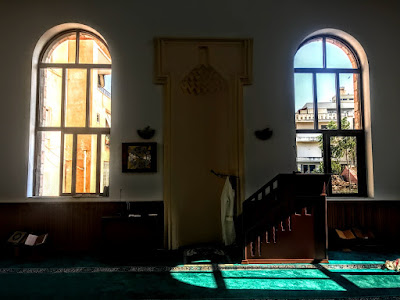 Inside the City Mosque in Saranda (Photograph: Patrick Comerford, 2019)

The estimates of their size vary wildly, from 60,000 to 750,000 in Albania alone. Arguably, the Bektashis tell us much about a forgotten part of Christian history. Different sources tell different stories about their origins and identity.

The simplest explanation is that they follow a distinctive branch of Shi’a Islam, and they claim as their founder the 13th-century saint and mystic Haji Bektash Veli. His followers developed an Islamic Sufi order, with dervishes living in houses or lodges known as tekkes, each headed by a superior known as a baba.

The Bektashis are famous in Albanian history as being at the forefront of the struggle against the long period of Ottoman rule. Later, they served in the partisan forces, fighting alongside Hoxha’s communists against first Italian and then German occupation.

The Bektashis blend elements of Islam, Christianity and even Buddhism in what is an esoteric, mystical mixture. Today, they believe Bektashism can be a bridge between Christians and Muslims. 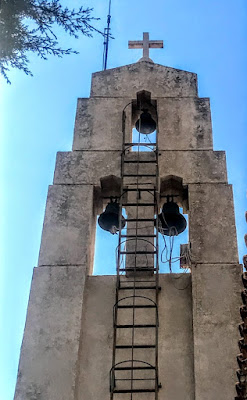 The bells of the Church of Saint Charalambos in Saranda (Photograph: Patrick Comerford, 2019)