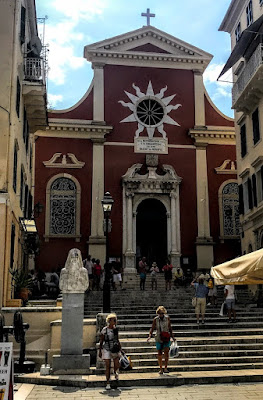 The Cathedral of the Virgin Spiliotissas and Saint Vlassis and Saint Theodora stands on a small square at the top of marble steps near the harbour of Corfu (Photograph: Patrick Comerford, 2019)

However, Corfu also has its own cathedral that has served the Diocese of Corfu, Paxos and the Diapontian Islands since 1841 and that was built in 1577 on the site of a much earlier church.

The Cathedral of the Virgin Spiliotissas and Saint Vlassis and Saint Theodora stands on a small square at the top of marble steps looking out over the harbour of Corfu and across to the Ionian Sea. It is one of the many beautiful churches in the Old City, but is often difficult for visitors to find in the labyrinth of narrow streets and warren of side alleys.

Even then, the impressive marble stairway and the purple façade of the cathedral with a decorative sunburst surrounding the rose window are only appreciated by stepping out of the cathedral and down into Mitropolis Square to which it gives its name. 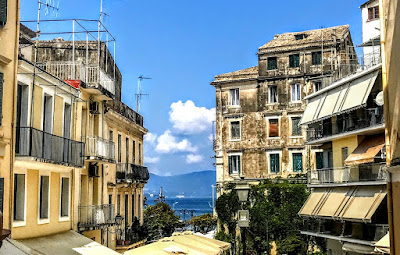 Looking out to the harbour and the Ionian Sea from the steps in front of the cathedral (Photograph: Patrick Comerford, 2019)

The diocese was transferred from the oversight of Rome to the Patriarchate of Constantinople in the eighth century, became an archbishopric in the 10th century, and became a metropolitan see later in the 11th century.

After Corfu fell to a Western alliance of the Genoese, Venetians and Angevins in 1204, a Roman Catholic archbishopric was established on Corfu. Under Roman Catholic rule, the Orthodox people of Corfu were served by a head priest (protopapas), who were often in episcopal orders.

However, the Orthodox Diocese of Corfu was not restored until 1800, following the fall of Venice in 1797 and the formation of the Septinsular Republic.

Until the Ionian Islands were united the modern Greek state in 1864, the Diocese of Corfu remained under the jurisdiction of the Ecumenical Patriarchate. Since then, it has been integrated into the Church of Greece. 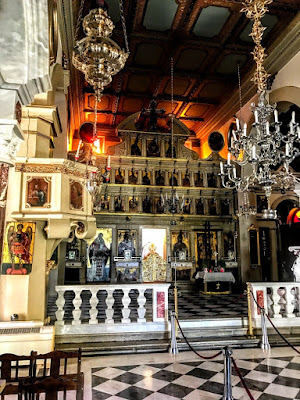 The cathedral was built as a church in 1577 on the site of an older church dedicated to Agios Vlassis or Saint Blaise, an Armenian miracle worker and martyr whose feast is celebrated on 11 February.

The new church was dedicated to the Virgin Mary Spiliotissas after the destruction of an older church with the same name. The name Spiliotissa is derived from spilia, meaning cave, a reference to an older church at a cave at the foot of the New Fortress.

The cathedral is a three-aisled church built in a Baroque style that is typical of many churches in the Ionian islands, and with many Renaissance details and features.

Like all Greek Orthodox cathedrals, Corfu Cathedral is filled with icons, treasures and large chandeliers. But here too is a carved wooden iconostasis or icon screen and important paintings from the 14th, 15th and 16th centuries, Byzantine icons like the Panagia Dimossiana, painted in the 15th century on both sides, icons by Mikhailis Damaskinos from Crete, Emmanouil Tzanes and Panayiotis Paramythiotis, and three remarkable but dark paintings of Old Testament scenes. 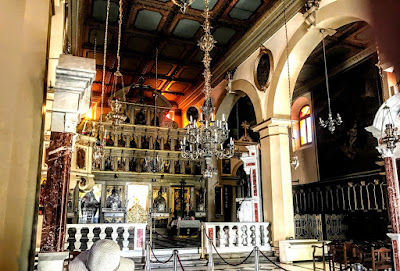 The shrine of Saint Theodora is to the right, behind the iconostasis (Photograph: Patrick Comerford, 2019)

On Tuesday afternoon, I was invited behind the icon screen to see and reverence the most celebrated relic in the church, the shroud-wrapped body of the Empress Saint Theodora (Θεοδώρα), kept in a lined silver sarcophagus in a shrine on the right-hand side of the iconostasis.

Saint Theodora (815-867) was empress and wife of the emperor of the Byzantine, Theophilos. She lived during the conflicts and divisions of the iconoclastic heresy, and she brought that conflict to an end in the Great Church of Aghia Sophia in Constantinople on 11 March 843, an event celebrated in the Orthodox Church as ‘the Triumph of Orthodoxy.’

Her husband Theophilos was an iconoclast, but Theodora held fast to the veneration of icons she kept in her private rooms in the imperial palace.

One story recalls how a servant witnessed her venerating her icons and reported her to the emperor. When her husband confronted her, she stated that she had merely been ‘playing with dolls.’ Two of her icons are kept at the monastery of Vatopedi on Mount Athos to this day and are referred to as ‘Theodora’s Dolls.’

When her husband Theophilos died on 20 January 842 at the age of 29, Theodora became the regent for her son Michael. She called a council chaired by the Patriarch Methodius, at which the veneration of icons was finally restored and the iconoclastic clergy were deposed.

Theodora died sometime after the murder of her son Michael in 867. She was recognised as a saint because of her zeal for the restoration of icons. Her body and the body of the island’s patron saint, Saint Spyridon, were moved to Corfu after the Fall of Constantinople. 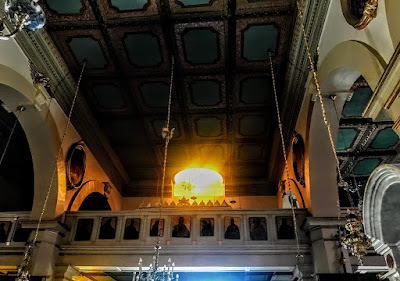 The gallery at the west end of the cathedral (Photograph: Patrick Comerford, 2019)

Saint Theodora’s feast day is 11 February – the same day as feast of Saint Vlassis, and they both share the dedication of the cathedral.

The relics of Saint Theodora the Empress are carried in procession through the streets of Corfu on the first Sunday of Great Lent, celebrated in the Orthodox Church as the Sunday of the Triumph of Orthodoxy. On the same day, the church distributes pieces of watermelon in remembrance of a miracle attributed to Saint Vlassis, who cured the children of Corfu of a disease of the throat.

The bust at the foot of the cathedral steps, depicting the Ecumenical Patriarch Athenagoras I, is a gift from people of Corfu and America. While still a deacon, he was elected the Metropolitan of Corfu in 1922 and was immediately raised to the episcopacy.

Metropolitan Athenagoras became Archbishop of North and South America in 1930, and at the age of 61 he was elected Patriarch of Constantinople in 1960.

The meeting between Patriarch Athenagoras and Pope Paul VI in Jerusalem in 1964 led to rescinding the excommunications of 1054 which mark the Great Schism between the Churches of the East and West. This was a significant step towards restoring relations between Rome and Constantinople and led to the Catholic-Orthodox Joint Declaration in 1965. 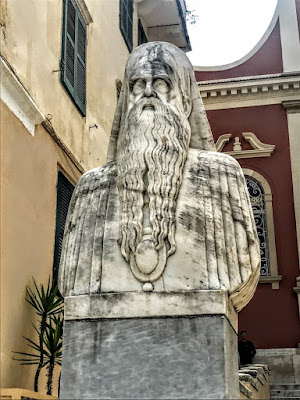 The bust of Patriarch Athenagoras outside Corfu Cathedral … he was Metropolitan of Corfu in 1922-1930 (Photograph: Patrick Comerford, 2019)