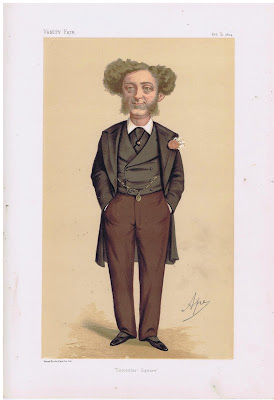 During research in recent weeks I have come across the extraordinary story of Albert Grant (1831-1899), a Conservative MP who was also a fraudster engaged in banking and business frauds in Britain and across the world throughout much of the 19th century. He liked to be known as Baron Grant, an Italian title he probably bought, and defrauded poor widows and Anglican clergy for decades.

Although the scale of his frauds was extraordinary in his day, his story may not appear unusual by the standards held or ignored by many holding public office today. Nor should we surprised by the story of a Tory MP who secured his election
What is unusual may be the fact that he was born into conditions of stark poverty, and that the respectable politician he defeated by bribery and buying votes was also born in Dublin.

Albert Grant was born Abraham Zachariah Gotheimer in Dublin on 18 November 1831. His father, Berton Gotheimer, was born in Prussia around 1798 and later moved to Liverpool, where he was living in 1829; his mother Julia was born in Portsmouth.

In Dublin, Berton Gotheimer eked out a living as a poor pedlar. When Abraham was born in a lane off Fleet Street in Dublin, the family was so poor their neighbours had to provide swaddling clothes for the baby.

The child was circumcised by Alexander Lazarus Benmohel, President of the synagogue in Saint Mary’s Abbey, Dublin.

The family later moved to London where his father became a partner in a business importing fancy goods and a commission agent.

As a child in London, Abraham Gotheimer worked for a family retailer who sold imported French musical boxes, clock parts and other pieces, although later in life he claimed he was educated in London and Paris. By 1851, he was working as a merchant’s clerk in the city of London and later became a travelling salesman of wines.

Meanwhile, he was been baptised into the Church of England and changed his name to Albert Grant before marrying Emily Isabella Robinson in 1856. She was the daughter of Skeffington Robinson from Antrim, a slave-owning sugar planter in Dominica.

As Albert Grant, he was admitted as a freeman of the city of London, and by 1858 had established himself as a banker and discount agent in Lombard Street. He set up the Mercantile Discount Company in 1859. Concerns were aired about the large salaries and beneficial financial guarantees enjoyed by Grant and his partners.

The company failed in 1861 with liabilities of £1.5 million. But Grant escaped any personal loss, and was soon financing railway schemes in Yorkshire, Essex and Wales.

He expanded his activities in 1863, establishing Crédit Foncier and Mobilier of England, one of a number of ‘rip-off finance houses’ that flourished in the sustained bull market of the period. He used Crédit Foncier and Mobilier of England to launch a number of ventures in which he found investors by using directories and targeting financially naive groups, including Anglican clergy and widows.

Meanwhile Grant built an opulent house at Cooper’s Hill near Egham, Surrey, designed in the Gothic revival style by F & H Francis in 1865. He was selected that year as the Conservative candidate in Kidderminster, standing against the sitting Liberal MP, Dublin-born Colonel Luke White (1829-1888) of Luttrellstown Castle, Dublin. White, who was a Junior Lord of the Treasury, had previously been MP for Co Clare (1859-1860) and Co Longford (1861-1862).

During the campaign, Grant was denounced as ‘a fraudulent adventurer,’ but Grant was elected and held the seat for three years.

Victor Emmanuel II of Italy gave Grant the hereditary title of baron in May 1868. Supposedly this was in recognition of Grant’s role in raising the finances to build the Galleria Vittorio Emanuele in Milan, one of the largest and earliest fashionable shopping centres in Europe. However, even then, it was alleged that Grant had bought the title. Later, when Grant was made a Commander of the Portuguese Order of Christ, similar allegations came to the fore.

Each of the companies he set up between 1864 and 1872 collapsed in controversial circumstances amid allegations of fraud made against Grant. Crédit Foncier fell in July 1868 when Grant left the company amidst allegations that large commissions had been improperly pocketed by the directors. As the scandals gathered steam, he decided not to contest the general election at the end of 1868, and Thomas Lea regained Kidderminster for the Liberals.

Most of these ventures later proved to be fraudulent. In 1872, he financed the construction of the North Wales Narrow Gauge Railways (Moel Tryfan Undertaking).

By then, Grant was immensely wealthy, and in 1872 he bought Horstead Hall, near Norwich. A year later, he acquired a large slum area south of Kensington Gardens and built Kensington House, a magnificent, 90-room Italianate palace, at a cost of almost £350,000. 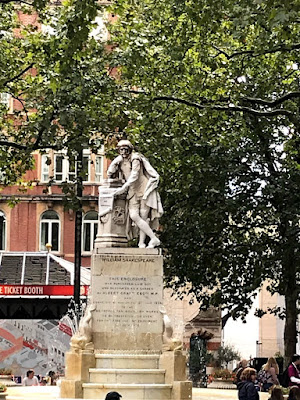 The statue of William Shakespeare in Leicester Square … Albert Grant presented the square and statue to the people of London in 1874 (Photograph: Patrick Comerford, 2019)

When a general election was called in early 1874, Grant stood again as the Conservative candidate in Kidderminster, and was returned with a majority of 111.

This was the only modern British election when a party has been defeated despite receiving an absolute majority of the popular vote. The Liberals, with 1,281,159 votes, received 242 seats, while the Conservatives with 1,091,708 votes, received 350 seats. If parallels with today are being sought, the Conservatives were a minority in Ireland, Scotland and Wales, but still formed a majority, mainly because so many English seats were not contested.

Grant boosted his public image later that year when he presented Leicester Square to the people of London on 3 July 1874. The square, then known as Leicester Fields, had long been in a dilapidated state, and was used as a dumping ground for dead cats and dogs. The site was owned by numerous freeholders and the city authorities found it practically impossible to improve the area.

Grant bought out the rights of all the respective owners and, after planting an ornamental garden and erecting a statue of William Shakespeare, along with busts of Isaac Newton, William Hogarth, Sir Joshua Reynolds and John Hunter, he transferred ownership of the site to the Metropolitan Board of Works at a personal cost of £28,000.

It is interesting to note than on the plinth of Shakespeare’s statue, he is described as ‘Albert Grant, Esq, MP’ and not as Baron Albert Grant.

Meanwhile, Grant and his election agents were accused of bribery and of buying votes with drinks and food. It emerged that while his declared expenses were only £300, he had spent over £1,200 during the campaign. In a ruling in July 1874, Grant was unseated and ordered to pay costs.

Grant’s speculations included buying The Echo, a London evening newspaper, in 1875, but he sold it off within 12 months.

He was constantly pursued by creditors in the courts from 1876, and was declared bankrupt in 1877. He put the company involved in the narrow-gauge railway in Wales and that he had helped finance into receivership over a loan of £7,000, although he had made a clear profit of £8,800 from the project. The company appealed in 1878, securing a ruling that it was not liable for the debt and Grant lost the £7,000.

He was also involved in an international scandal involving the fraudulent sale of shares in the exhausted Emma Silver Mine at Alta, Utah, when he made a profit of £200,000 from the flotation. He tried to regain his fortune by establishing a new bank, the General Banking Company in 1878.

He stood again in Kidderminster in 1880 but was defeated by the Liberal candidate, John Brinton. Brinton’s first wife, who died in 1863, Ann Oldham, was from Dublin; his second wife, Mary Chaytor, was from Limerick.

The large house Grant had built in Kensington was demolished in 1883, the site sold, and the marble staircase was bought by Madame Tussaud’s. His last bank failed with liabilities of £800,000 and assets of £18,000, and he was back in the bankruptcy court in 1885.

Once one of the richest men in Britain, Grant spent his last years in relative poverty, and another order was made against him a few days before he died in Bognor on 30 August 1899 at the age of 67. As his coffin was carried to his grave, a rainstorm began and up to half the mourners decided to stay inside the church. The burial rites at his graveside were very brief.

Grant was the model for the character of the corrupt financier Augustus Melmotte in Anthony Trollope’s novel, The Way We Live Now, first published serially at the height of Grant’s fame in 1874-1875.

Albert Grant was MP for Kidderminster in 1865-1868 and again in 1874 … but lost the seat in Westminster for bribery and buying votes (Photograph: Patrick Comerford)