Kilnaughtin Church,
west of Tarbert, may
stand on a Druidic site 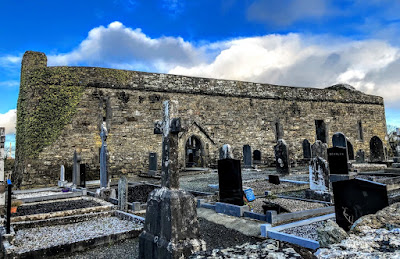 Kilnaughtin Church takes its name from a fifth or sixth century saint but is said to stand on the site of a druids’ sanctuary (Photograph: Patrick Comerford, 2019)

During my Christmas rounds of the parish this week and last week, I also visited the ruined, mediaeval church at Kilnaughtin that is said locally to stand on the site of an earlier sanctuary used by Druids that was converted into a church in the decades immediately after Saint Patrick.

Kilnaughtin is the ancient name of the parish of Tarbert and the name is derived from the Irish, meaning the Church of Saint Naughtin or Neachtain. The name Kilnaughtin is now attached to Saint Brendan’s Church on Steeple Road, at the east end of Tarbert, off the road to Glin and Foynes.

A replica of the fifth century Ogham stone found at Kilnaughtin and now in the Pitt Rivers Museum in Oxford (Photograph: Patrick Comerford, 2019)

The regular discovery of the roots and stumps of ancient yew and holm oak trees during burials and the survival of an ancient Ogham stone bearing the inscription ‘Mac I Broc’ (‘son of Broc’ or ‘son of the Badger’), that once stood about four feet to the south east of the church, suggest to some that this site may once have been a Druidic sanctuary.

The present mediaeval structure stands on the site of an earlier cillín (small church) or oratory that may have been built originally by the saint who gives his name to this place. Saint Naughtin is said to have been a nephew of Saint Patrick and a disciple of Saint Senan (ca 488-544), an important early church leader in this region.

Saint Senan established his monastery and cathedral ca 534 on Scattery Island in the mouth of the Shannon estuary, to the north-west of this site. From there, he and his monks brought Christianity to the northern and southern shorelines of the Shannon, in areas that are now north Co Kerry and south Co Clare. 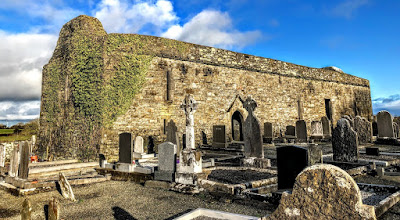 The original church at Kilnaughtin is west of Tarbert off the coast road to Ballylongford (Photograph: Patrick Comerford, 2019)

In reality, little is known about Saint Naughtin, although he was venerated alongside Saint Senan, Saint Erc, Saint Lughach, Saint Ita, Saint Eithne, Saint Eiltín and Saint Brendan, among the early saints of north Kerry and west Limerick.

A holy well nearby, known as Tobernaughtin, is dedicated to Saint Naughtin. It is said the well dries up during the Summer, but some water comes in during Winter.

From the late sixth century until the early twelfth century, Kilnaughtin was one of the termons or sanctuary lands of the monastic Diocese of Scattery.

After the reorganisation of the Irish Church at the Synod of Rath Breasail in 1111-1112, Kilnaughtin was transferred to the Diocese of Ardfert and Aghadoe, although it retained its links with Scattery. 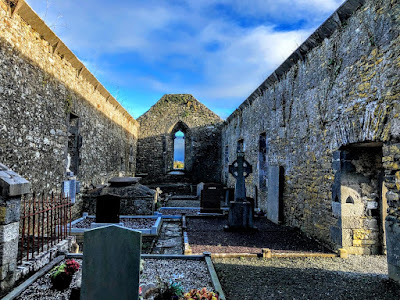 Inside the church at Kilnaughtin, facing east (Photograph: Patrick Comerford, 2019)

The list of rectors of the parish dates back to at least 1347, when a priest named Maurice FitzPeter was presented by the Crown on 4 September to the Church of Kylnathyn in Mynnour in the Diocese of Ardfert.

After that, there is a long gap in the records until 1418, when Donald O’Kynnelyoe is appointed Rector of Killreachtayn. The parish seems to have been vacant for a long time, and it is noted that Killreachtayn is commonly called the Church of Dunchacha and Dryseach and Tearmundscanayn. There were objections to his appointment too, and he needed a dispensation in those pre-Reformation days because he was the son of a priest. 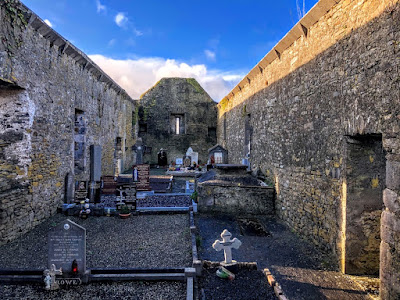 Inside the church at Kilnaughtin, facing west (Photograph: Patrick Comerford, 2019)

During the 15th century, John O’Connor Kerry, Lord of Carrigafoyle and Tarbert and the founder of the Franciscan Friary at nearby Lislaughtin, oversaw extensive rebuilding of the church at Kilnaughtin.

This rebuilding included the elegant pointed gothic arched doorways, ogee lancet windows, a cinquefoil piscina and an interior architrave. The traces of a porch can also be seen over the south door.

On the exterior wall, over the east window, there is a carved head wearing a chapeau de seigneur, which may represent the local lord, John O’Connor Kerry, whose patronage financed the present structure. 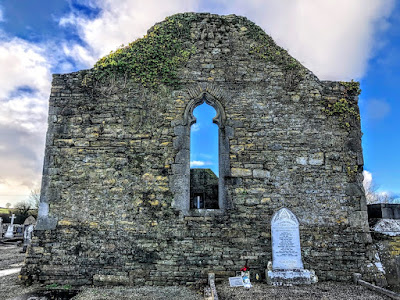 As the FitzGeralds, Earls of Desmond, extended their power in this area, Dermot O’Connor, Lord of Tarbert and kinsman of John O’Connor Kerry of Carrigafoyle Castle, forfeited his lands in Tarbert to James FitzGerald, 6th Earl of Desmond, the ‘Usurper’ Earl, in 1450. Within a decade, the Earl of Desmond built a castle or tower house in Tarbert, probably located on the north side of the present-day Square.

Following the Tudor Reformations, the church became an Anglican parish church. However, Roman Catholics continued to use the churchyard for burials, and maintained a clandestine chapel nearby.

For almost 200 years, the 15th century church at Kilnaughtin served as the Church of Ireland parish church, with some occasional interruptions. In 1587, following the defeat of the Earl of Desmond, the Manor and Castle of Tarbert and the adjoining lands were granted to Sir William Herbert (1554-1593), a Welsh colonist, religious writer and politician.

Herbert became an ‘undertaker’ for the plantation of Munster in 1586, and he applied for three ‘seignories’ in Kerry. In 1587, he was allotted many of the lands confiscated the Earl of Desmond. These included Castleisland and its neighbourhood, and covered 13,276 acres. He wished to see Kerry colonised by English settlers, he had the articles of the Creed, the Lord’s Prayer, and the Ten Commandments translated into Irish, and he directed the clergy on his estate to read the services in Irish.

After almost two years at Castleisland, Herbert acted as vice-president of Munster. But his work was severely attacked by Sir Edward Denny, High Sheriff of Kerry and owner of Tralee and the neighbourhood, who complained of Herbert’s self-conceit, and who said his constables were rogues. 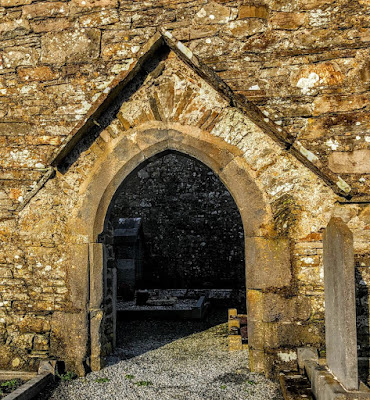 The Herbert family lost its estate in Tarbert soon after, and in 1607, the Lord Deputy, Sir Arthur Chichester, asked the Privy Council to grant Tarbert to Patrick Crosbie of Leix. The grant was made subject to families from the ‘Seven Septs’ of Leix being settled there.

Local lore says that monks who fled Kilnaughtin Church were the monks whose earns were shorn of their ears by Cromwellian soldiers in Glouncloosagh in the mid-17th century.

The Crosbie family sold Tarbert to the Roche family of Limerick in 1653. The lands were eventually bought by Daniel O’Brien, Lord Clare, who held them until the Battle of the Boyne and the Treaty of Limerick in 1690. As a Jacobite, he was obliged to flee to France, and in 1697 John Leslie, a supporter of King William III, was granted the confiscated Tarbert estate of Lord Clare.

The Leslie family began building Tarbert House in 1700, and John Leslie was the Church of Ireland Bishop of Limerick, Ardfert and Aghadoe in 1755-1770. Sir Edward Leslie laid out the village of Tarbert in 1775. Around this time, the first Palatine settler, Peter Fitzell moved from Rathkeale to Tarbert as a tenant farmer on the Sandes estate at Sallowglen. 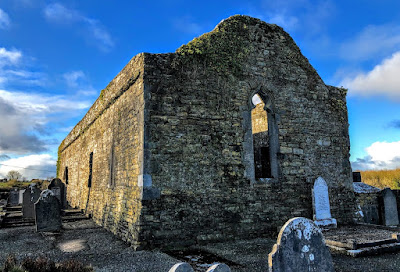 But the new church was destroyed in a ‘violent hurricane’ in 1789, and an enlarged church was built on Steeple Road. The Vestry Minutes from Kilnaughtin for 1812 and later show that the present church, Saint Brendan’s Church, which has the date 1814 inscribed above the porch, is a rebuilding and extension of the existing church at Tieraclea.

Around the same time, Sir Edward Leslie established an Erasmus Smith School on the Glin Road in 1790. The school has 75 Roman Catholic pupils (56%) and 44 Protestant pupils (44%) on the roll book. When Sir Edward Leslie died at the age of 73 in Weymouth in 1818, the title of baronet he had received in 1787 died out and a considerable fortune of between £3,000 and £4,000 a year devolved on his first cousin, Robert Leslie of Leslie Lodge, Tieraclea. 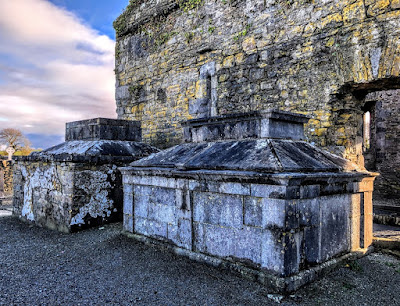 Old tombs and graves at Kilnaughtin, where the churchyard is still used for burials (Photograph: Patrick Comerford, 2019)

Samuel Lewis in his Topographical Directory of Ireland (1837) notes that the Rectory of Kilnaughtin was impropriate in Anthony Raymond, who was receiving two-thirds of the tithes, while the vicar received only one-third.

The Kerry-born architect James Franklin Fuller (1835-1924) prepared plans for additions to the church in 1876. The work was in progress in November 1877, and the chancel was completed by September 1878. The contractor was a Mr Crosbie of Tralee.

Fuller’s alterations and additions realigned the church, so that the original east-west church became the transepts, while the chancel area or top of the church is now at the south end of the building. The Irish Ecclesiastical Gazette, the forerunner of the Church of Ireland Gazette, reported during this renovation: ‘A correspondent tells us that a very handsome stone cross, which was to have been placed on the new porch, has been thrown aside, the incumbent objecting to its erection.’

The inscriptions on the church plate include ‘Tarbert Church 1857’ and ‘Kilnaughtin Church 1866.’ The plaques in the church commemorate many prominent local families, including the Fitzell, Leslie and Sandes families, and one plaque was moved from the former Methodist Church in Tarbert into the church. 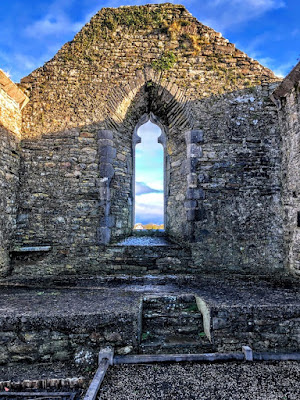 Meanwhile, when a new Roman Catholic parish church was built in Tarbert in 1833, a stone from the old church in Kilnaughtin was incorporated in the foundation of the sanctuary.

The Ogham stone found in the old churchyard at Kilnaughtin in 1836 was donated to the Pitt Rivers Museum in Oxford in 1884, where it is on display. Known as the ‘Cockhill Stone,’ is dates from the early fifth century. The Ogham inscription ‘Maqi Broc’ commemorates someone who was the son of an important local man named Broc (‘Badger’).

The tradition of this ancient church at Kilnaughtin is kept alive in the two parish churches in Tarbert. 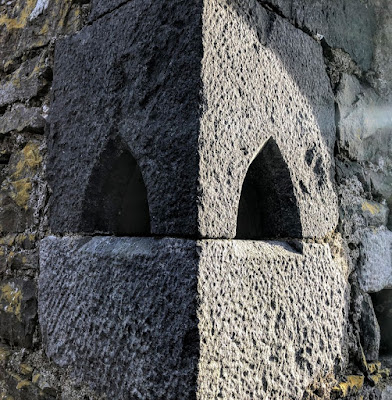 The tradition of this ancient church at Kilnaughtin is kept alive in the two parish churches in Tarbert (Photograph: Patrick Comerford, 2019)