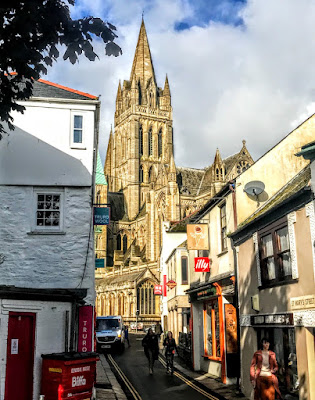 The Festival of Nine Lessons and Carols is traditionally celebrated on Christmas Eve. In this service, the stories of the fall of humanity, the promise of the Messiah, and the birth of Christ are told in nine short Bible readings or lessons from Genesis, the Prophets and the Gospels, interspersed with the singing of Christmas carols, hymns and anthems.

Although the tradition of Nine Lessons and Carols is popularly associated with King’s College, Cambridge, its origins are found in Truro Cathedral in Cornwall.

Until the late 19th century, Christmas carols were normally performed by singers visiting people’s houses. But carols were generally considered secular in content and had been excluded from church services until the rising popularity of hymn-singing in the Victorian period encouraged church musicians to introduce carols into worship.

The composer and organist John Stainer published his collection, Christmas Carols New and Old, in 1871. This and a book of carols by Richard Chope and Sabine Baring-Gould, Carols for use in church during Christmas and Epiphany (1875) soon became influential.

Stainer introduced carols at the service of choral evensong in Saint Paul’s Cathedral, London at Christmas 1878. Soon, other cathedrals began to adopt carols at Christmas time. That year too, the Royal Cornwall Gazette reported on 20 December that the choir of Truro Cathedral would sing a service of carols at 10 p.m. on Christmas Eve. 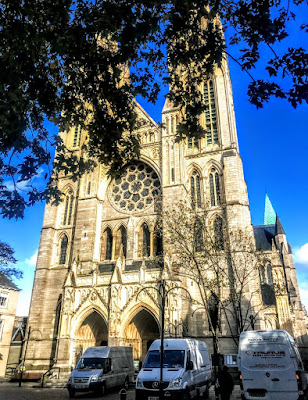 Truro Cathedral is one of only three cathedrals in the Britain with three spires (Photograph: Patrick Comerford, 2019)

Bishop Benson was concerned at the excessive consumption of alcohol in Cornish pubs during the Christmas season, and was looking for ways to attract revellers out of the pubs and into the church for a religious celebration of Christmas.

The idea for a service of Christmas music interspersed with Bible readings was proposed by the Succentor of Truro Cathedral, Canon George Somerset Walpole, later Bishop of Edinburgh. Truro Cathedral was still being built and services were held in a temporary wooden structure that served as a Pro-Cathedral. Over 400 people attended the first Service of Nine Lessons and Carols at 10 p.m. on Christmas Eve 1880.

Bishop Benson’s son, Arthur Christopher Benson (1862-1925), Master of Magdalene College, Cambridge, later recalled: ‘My father arranged from ancient sources a little service for Christmas Eve, nine carols and nine tiny lessons. They were read by various officers of the church, beginning with a chorister and ending, through different grades, with the bishop.’ 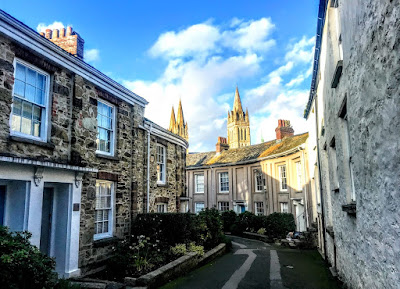 When Bishop Benson became Archbishop of Canterbury in 1883, the Service of Nine Lessons and Carols gathered popularity not only in the Church of England but throughout the Anglican Communion.

The original service has been adapted all over the world and has become the standard format for many carol services in cathedrals, churches and schools.

The Revd Eric Milner-White, the new Dean of King’s College, Cambridge, introduced the service to his college chapel in 1918, taking advantage of the established choral tradition of the chapel choir. This service was so successful it has been an annual tradition for 100 years from 1919 on. The BBC began has broadcast the service on radio from 1928 and on television 1954. 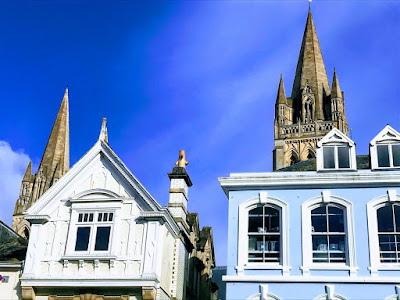 Truro Cathedral was the first Anglican cathedral to be built on a new site in England since Salisbury Cathedral in 1220 (Photograph: Patrick Comerford, 2019)

When Truro Cathedral produced a reconstruction of Bishop Benson’s original Service of Nine Lessons and Carols from 1880 in December 2013, it was attended by over 1,500 people.

Because the Service of Nine Lessons and Carols is so embedded in Christmas traditions throughout the Anglican world, it is hard for people to realise that it is a late Victorian innovation and that Truro Cathedral is one of the newest cathedrals in the Church of England. 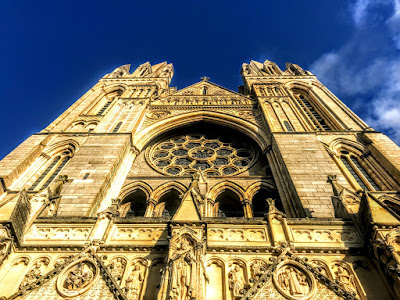 The west front of Truro Cathedral with its Rose Window (Photograph: Patrick Comerford, 2019)

The formation of a diocese

The Diocese of Truro was formed in December 1876. It was almost 600 years since Cornwall last had its own bishop. Canon Edward White Benson, then chancellor of Lincoln Cathedral, was appointed the first bishop of the new diocese, having turned down a nomination as Archbishop of Calcutta. He was consecrated in Saint Paul’s Cathedral, London on 25 April 1877 and enthroned in Truro on 1 May.

The Cathedral of the Blessed Virgin Mary in Truro was built in 1880-1910 to a Gothic Revival design by the architect John Loughborough Pearson (1817-1897) on the site of the parish church of Saint Mary. It is one of only three cathedrals in the Britain with three spires: the other two are Lichfield Cathedral and Saint Mary’s Cathedral, Edinburgh; Lincoln Cathedral had three spires and was the tallest building in the world for 238 years, until the central spire collapsed in 1549.

Construction work at Truro Cathedral began in 1880, and the foundation stone of the new cathedral was laid by the Prince of Wales (later King Edward VII), as Duke of Cornwall, on 20 May 1880. 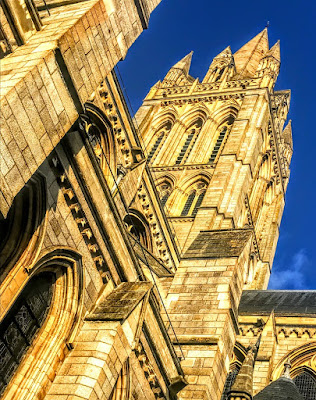 This was the first Anglican cathedral to be built on a new site in England since Salisbury Cathedral in 1220. It was built on the site of the 16th-century parish church of Saint Mary the Virgin, a building in the Perpendicular style, with a spire 39 metres tall.

The last services in Saint Mary’s Church were held on Sunday 3 October 1880. The church was demolished that month, leaving only the south aisle, which was retained as a parish church.

A temporary wooden building on an adjacent site served as the pro-cathedral for the new diocese for seven years, from 24 October 1880 until 3 November 1887. It was in this building that Bishop Benson introduced his Service of Nine Lessons and Carols on Christmas Eve 1880. 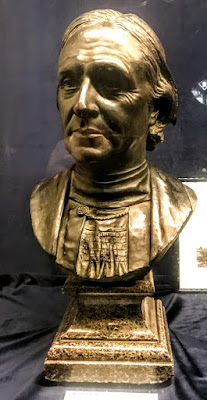 The choir and transepts of the new cathedral were complete by October 1887. The service of consecration on 3 November 1887 was conducted by the former Bishop of Truro, Edward White Benson, who had become Archbishop of Canterbury. His successor as Bishop of Truro, George Wilkinson, and 20 other bishops were also present, as well as civic representatives, diocesan clergy, and a congregation of about 2,000 people.

The central tower of the cathedral was finished by 1905 and the building was completed with the opening of the two western towers in 1910. The cathedral architect JL Pearson died in 1897 and his son Frank Loughborough Pearson (1864-1947) took over the project. Frank Pearson’s other works include Saint Matthew’s, Auckland, in New Zealand, a reduced version of Truro Cathedral. 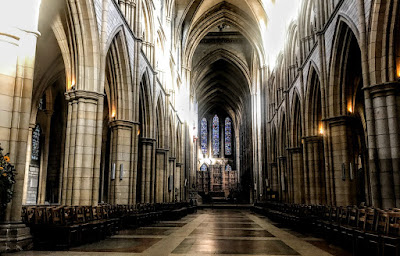 Inside Truro Cathedral … the nave, vaulting, and arches draw the eyes towards the High Altar (Photograph: Patrick Comerford, 2019)

The central tower and spire stand 76 metres tall, while the western towers reach heights of 61 metres. Four kinds of stone were used: Mabe granite for the exterior, Saint Stephen’s granite for the interior, and softer Bath and Polyphant stone for the pillars and carvings. 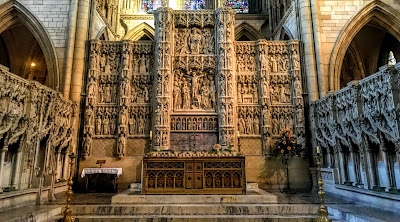 The High Altar and the reredos in Truro Cathedral (Photograph: Patrick Comerford, 2019)

The spires and turret roofs are of stone, except for a copper spire over the bell tower at west end of Saint Mary’s Aisle. The other roofs are of slate. The cathedral is vaulted throughout. Nathaniel Hitch (1845-1938) carved the decorative sculpture, including the reredos.

The original south aisle of Saint Mary’s Church survives as Saint Mary’s Aisle and is incorporated into the south-east corner of the cathedral. It still functions as the parish church of Truro city centre.

The cathedral is dedicated to the Virgin Mary, and so has no Lady Chapel. A Jesus Chapel and the Chapel of Unity and Peace are reserved for quiet prayer throughout the day. There was no chapter house until 1967 when the opportunity to enlarge the building on the south-east arose. The architect of the new building was John Taylor. 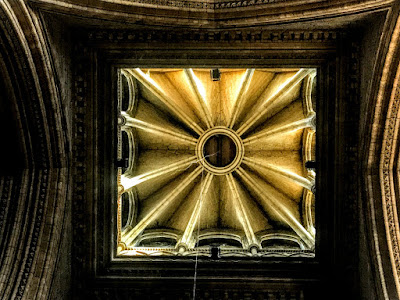 Beneath the crossing in Truro Cathedral (Photograph: Patrick Comerford, 2019)

The interesting altar in Saint Margaret’s Chapel was designed by Peter Skerrett and made by his craftsman colleagues, Toby and Bryn Roskilly, using fumed chestnut, china clay and glass. The altar was commissioned in 2002 through a generous donation from the Freemasons of Cornwall. 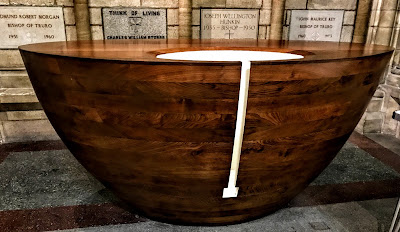 The altar in Saint Margaret’s Chapel was designed by Peter Skerrett and made by Toby and Bryn Roskilly, using fumed chestnut (Photograph: Patrick Comerford, 2019)

The memorials in Truro Cathedral include the Boer War Memorial in the south aisle commemorating the lives lost by the Duke of Cornwall Light Infantry. Another memorial commemorates Captain Thomas Agar-Robartes (1880-1915), who was killed in France during World War I and recommended posthumously for the Victoria Cross.

He was Liberal MP for St Austell in Cornwall and the eldest son and heir of Thomas Agar-Robartes (1844-1930), 6th Viscount Clifden of Gowran, Co Kilkenny, and Irish peer. The family was associated with Gowran Castle, and the family title died out when the captain’s youngest brother, the 8th Lord Clifden, died 45 years ago on 22 December 1974. 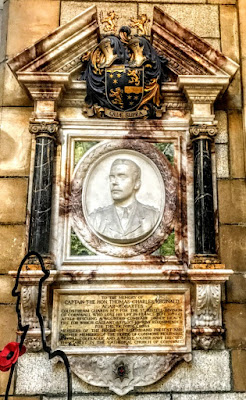 A surviving 17th century memorial from Saint Mary’s Church is the memorial in the north transept to John and Phillipa Robartes. He made his fortune as a tin merchant and became Mayor of Truro. 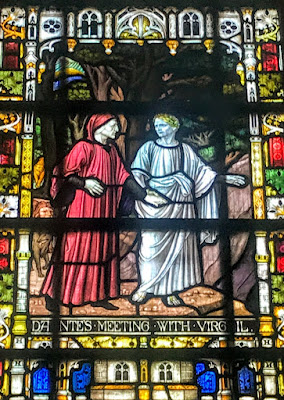 ‘Dante’s meeting with Virgil’ … one of the many interesting stained-glassed windows (Photograph: Patrick Comerford, 2019)

In 2002, Truro Cathedral embarked on what planned as a 15-year project to restore the east end, the west front and the central tower and spire. Each of the projects would be undertaken as funds allowed. The east end restoration repaired stonework and damage to the iron work on the stained-glass windows.

From 2004, a year-long project saw the restoration of the massive west front and towers. Work began on the central tower and spire in 2009 and 2010.

The restoration work is being carried out by WR Bedford. According to the managing director, Stuart Aston, the problem is that the Bath Stone used on the more decorative areas of the cathedral has not stood up well to the salts and sand in the maritime climate of Cornwall.

The erosion of the stonework has left much of the exposed stonework in such a damaged condition that it resembles honeycomb. 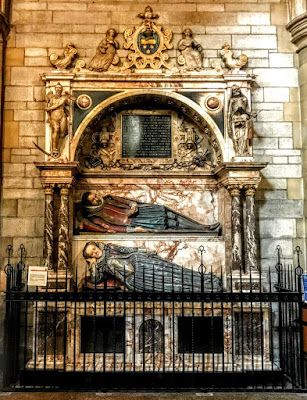 The 17th century memorial to John and Phillipa Robartes in the north transept (Photograph: Patrick Comerford, 2019)

As for Archbishop Benson, who initiated the tradition of the Christmas tradition of Nine Lessons and Carols, he started a short tour of Ireland on 16 September 1896, and with preached his last sermon at the reconsecration and reopening of Saint Brigid’s Cathedral, Kildare, on 22 September.

The visit was an important reconciliation with the Church of Ireland, for Archbishop Benson had openly criticised the action of the Archbishop Plunket of Dublin in consecrating a bishop for the Spanish Episcopal Reformed Church.

He spoke at a meeting in Belfast on 9 October to promote building Saint Anne’s Cathedral. He then crossed the Irish Sea and travelled on the next day to Hawarden, to stay with his friend, William Ewart Gladstone.

He attended an early celebration of the Eucharist on Sunday 11 October 1896, returned to the church for Morning Prayer, and died of a heart attack as the absolution was being pronounced. He was buried at Canterbury Cathedral. 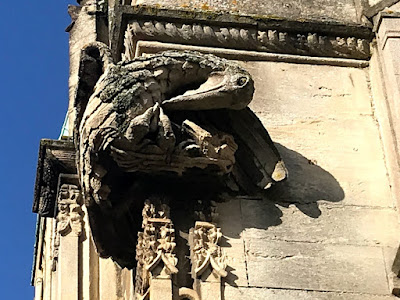 This feature was first published in the Church Review (Dublin and Glendalough) in December 2019. 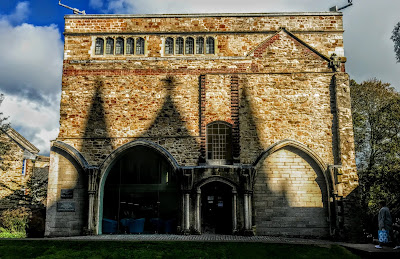 The original Truro Cathedral School … the vaulting was part of the planned cloisters that were never built (Photograph: Patrick Comerford, 2019)