‘Change and decay
in all around I see’ 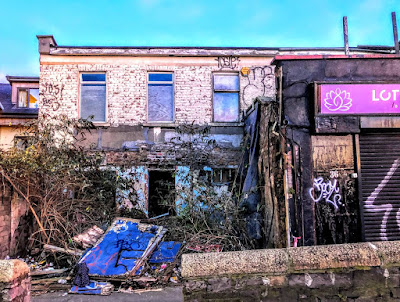 ‘Change and decay in all around I see’ … change and decay at Upper Clanbrassil Street near Harold’s Cross Bridge, Dublin, this week (Photograph: Patrick Comerford, 2019)

I have been back in Dublin a few times in the past two or three weeks, taking advantage of the preparations for Christmas the lull in the days immediately after Christmas and around New Year’s Eve to take some time off.

There have been walks on the beach or at the shore in Bettystown and Laytown in Co Meath, in Skerries and Howth, in north Co Dublin, and in Bray and Kilcoole, Co Wicklow, walks by the River Barrow in Portarlington and by the River Liffey and the boat clubs at Islandbridge, and walks at sunset in the Phoenix Park, close to both Phoenix Cricket Club and Aras an Uachtarain.

There have been meals out in favourites places like the Avoca Café in Rathcoole, the Olive Café in Skerries, and Relish in Bettystown, and the delightful discovery of Da Mimmo – Sapori D’Italia on Dublin’s North Strand, where the Fuscardi family offers authentic tastes of Italy in both wine and food.

Da Mimmo is an example of the positive changes in Dublin in recent years. The Fuscardi family bought the premises in 1960 and at first ran a well-known fish and chip shop there. The North Strand may not be the place you expect fine dining, but this Dublin 3 restaurant now has a reputation for its homemade, wood-fired pizzas, pasta and antipasti, its delicious desserts and a wide range of best Italian wines.

LovinDublin described Da Mimmo as an ‘Italian gem’ and it is now listed in the top 10 Italian restaurants in Dublin.

Henry Francis Lyte’s hymn, ‘Abide with me,’ seems an appropriate hymn to sing as an old year turns to a new year. But a line in that hymn – ‘change and decay in all around I see’ – came to mind one afternoon this week as I travelled along Clanbrassil Street, in the heart of Dublin’s ‘Little Jerusalem.’

This area was once the heart of Jewish Dublin; this where James Joyce tells us Leopold Bloom was born, and where Molly Bloom is the guest of the Comerford family at a post-Christmas party in 1893.

In the short space of a half century or little more, immediate members of this one branch of the Comerford family had addresses at at least 15 houses in Lower and Upper Clanbrassil Street. Many more family members lived at different times in the same era in houses in the warren of streets off Clanbrassil Street, in ‘Little Jerusalem’, in Portobello and around Charlemont Street.

Now the houses and buildings on Upper Clanbrassil Street are in the early stages of another wave of change, or threatened by decay.

Change is inevitable; decay can be reversed. It would be a shame to lose this part of literary, community and Jewish history in Dublin.

Abide with me, fast falls the eventide;
the darkness deepens; Lord, with me abide;
when other helpers fail and comforts flee,
help of the helpless, O abide with me.

Swift to its close ebbs out life’s little day;
earth’s joys grow dim, its glories pass away;
change and decay in all around I see;
O thou who changest not, abide with me.

I need thy presence every passing hour;
what but thy grace can foil the tempter’s power?
Who like thyself my guide and stay can be?
Through cloud and sunshine, O abide with me.

I fear no foe with thee at hand to bless;
ills have no weight, and tears no bitterness.
Where is death’s sting? Where, grave, thy victory?
I triumph still, if thou abide with me.

Hold thou thy cross before my closing eyes;
shine through the gloom, and point me to the skies;
heaven’s morning breaks, and earth’s vain shadows flee;
in life, in death, O Lord, abide with me.