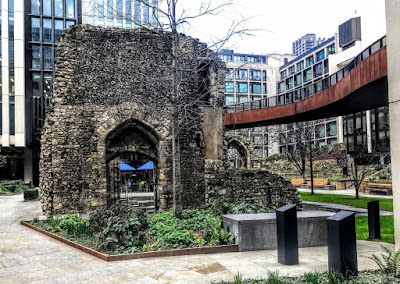 The ruins of Elsyng Spital and two mediaeval churches stand on in island surrounded by modern developments (Photograph: Patrick Comerford, 2020)

During my visit to Salters’ Hall in London earlier this week, I was surprised not only to learn about its role in doctrinal divisions among the 18th century heirs of the Puritans and that Salters’ Hall was once used as a Presbyterian chapel, but I was surprised too to find that the ruins of two mediaeval churches stand close by in the pedestrianised area beside the Salters’ Garden.

The ruins of a mediaeval church and its tower are labelled in a public notice on the site as ‘The Tower of St Elsyng Spital.’

But who was Saint Elsyng that she gave her name to a mediaeval hospital or almshouse?

Indeed, there never was a Saint Elsyng. The tower and the ruins are the surviving remains of the tower and church that were part of the mediaeval hospital known as Elsyng Spital. 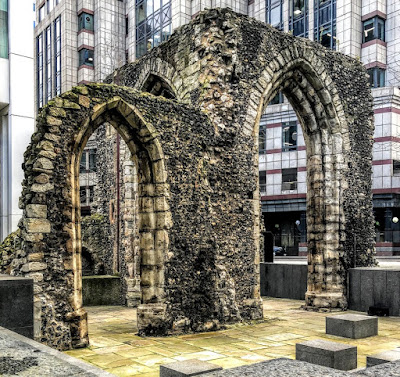 Elsyng Spital was founded on the site was a priory church belonging to a Benedictine nunnery, Saint Mary-within-Cripplegate (Photograph: Patrick Comerford, 2020)

The first church on this site was a priory church belonging to a Benedictine nunnery, Saint Mary-within-Cripplegate. It may have been founded before 1000, but by 1329 the community had fallen into decay. The land was acquired by William Elsing, a London merchant who founded a hospital or almshouse on the site, Elsyng Spital, in 1331.

Elsyng Spital stood on the street known as London Wall, and William Elsing intended it to provide shelter and spiritual and physical care for homeless, blind people, paralysed priests, people who could not look after their own needs, and wandering beggars.

The complex included the church, tower, cloisters, hospital or almshouse buildings with a long hall or common dining room, and a cemetery. It stood close to the city wall built in Roman times. A part of the Roman walls of London survives as the boundary between the hospital grounds and the Salters’ Garden. 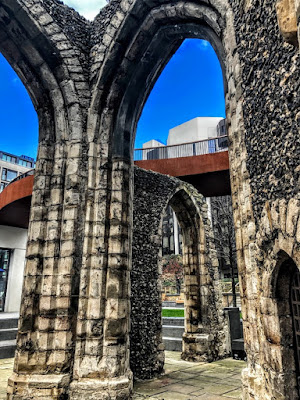 At first, the almshouse housed 32 residents, but this soon rose to 60 and then to 100. However, Elsing was worried about the secular priests who served the almshouse wandering about the City. In 1337, he petitioned to have them replaced by Augustinian Canons. Three years later, the Augustinian Canons and a prior were elected in 1340 with the assent of the Dean and Chapter of Saint Paul’s Cathedral.

Elsing died during the Black Death in 1349 and was buried in the church.

Elsing’s hospital, the chapel and the Augustinian priory survived until the dissolution of the monastic houses at the Tudor Reformation in 1536.

Most of the hospital buildings were turned into a private house, and within five years this belonged to Sir John Williams, the Master of the King’s Jewels, in 1541. A year later, on Christmas Eve 1542, the building burnt down. The parishioners of Saint Alphage’s Church bought the former church of Elsyng’s Spital to serve as their parish church (Photograph: Patrick Comerford, 2020)

When Saint Alphage’s Church on the neighbouring site became derelict, the parishioners bought the former church of Elsyng’s Spital to serve as their parish church.

The original 11th century church dedicated to Saint Alphage commemorated an Archbishop of Canterbury who was killed by the Danes in 1012. The church is said that to have been built before 1068, although the earliest mention of this church dates from ca 1108-1125.

The church was closed by Act of Parliament at the end of the 16th century and its ruins were demolished when the Priory Chapel attached to Elsyng Spital was taken over by the parish church.

Part of the property was sold on, and used for the foundation of Sion College in 1630. The church was repaired in 1624, and the upper part of the steeple rebuilt in 1649. It was damaged in the Great Fire of 1666 but not destroyed.

The churchyard to the north of the London Wall was still open in 1677, but was built over later, and the site of the earlier church became a carpenter’s yard.

Further repairs were made to the parish church in 1684 and 1701. The parishioners applied to the Commission for Building Fifty New Churches in 1711 for funds to enlarge the building, and in 1718 petitioned Parliament for funds. But neither initiative was successful. The steeple was in such a condition by 1747 that the bells could not be rung, and four of the six bells were sold. 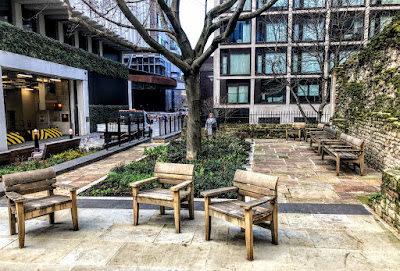 The rebuilt church had two fronts; an eastern one in Aldermanbury, and one to the north facing London Wall. George Godwin described them as ‘both equally remarkable for want of taste in the arrangement, and of beauty in the effect.’

The east front had a Venetian window between two pilasters, elevated on a basement; this arrangement was flanked by two doorways. The door and window surrounds and pilasters were stone, the rest brick. The façade to London Wall had two Doric columns, flattened against the wall, supporting an entablature and pediment. Between the columns was a doorway, its lobby leading into the mediaeval tower.

The interior of the church was described by Godwin as ‘merely a plain room with a flat ceiling, crossed from north to south by one large band at the east end.’ The pulpit was, unconventionally, placed against the west wall, so that the congregation faced away from the altar. 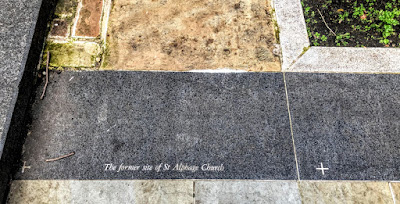 The outline of the mediaeval church is marked out in Saint Alphage Gardens (Photograph: Patrick Comerford, 2020)

The tower and porch were again in a poor state by 1900, and the north entrance was rebuilt with a neo-Gothic façade in 1913.

The church was damaged in an air raid in World War I. The parish was amalgamated with the parish of Saint Mary Aldermanbury in 1917. The church was rebuilt in 1919, but was then scheduled for demolition that year. The bells went to Saint Peter’s Acton, the nave was demolished in 1923, leaving the tower and the porch.

Until World War II, the tower was maintained with an altar and chairs as a place for prayer. The remains of the church were designated a Grade II listed structure in 1950. The surviving remnants consist of the ruin of a central tower, built of flint and rubble masonry, with arches on three sides; the south wall is missing. The amalgamated parish was united with Saint Giles-without-Cripplegate in 1954

The area along London Wall suffered damage from German bombing during World War II, Parts of the 11th century church were exposed when the surrounding buildings were destroyed, and now forms Saint Alphage Gardens. 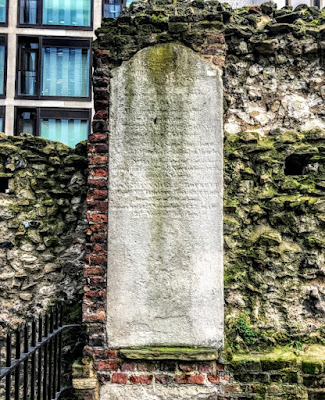 A plaque from the former churchyard in Saint Alphage Gardens (Photograph: Patrick Comerford, 2020)

Today only the church tower remains from the original 14th century buildings of Elsyng Spital. Fore Street and other streets in the area were realigned in the post-war rebuilding of the City. The development of London Wall Place and the Barbican complex provided for a newly created garden area laid out around the ancient walls.

New high walks were built on new walkways planned as a ‘new pedestrian experience’ in the 1960s, with shops along the walkways 40 ft above ground level. However, few people ever used the walkways and none of the shops ever opened. They remained empty from the day they were built until after the turn of the millennium.

With the development of two large office blocks – 1 London Wall Place and 2 London Wall Place – the stone walkways were demolished and everything for the pedestrian now operates once again at street level, and new narrower and functional walkways give this area an open and spacious feeling. 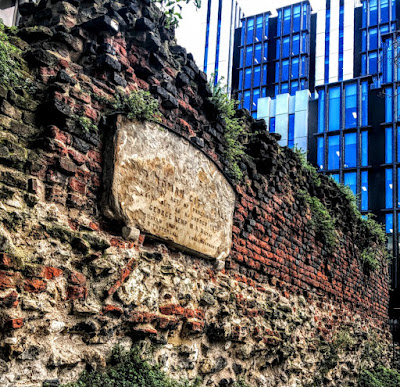 A plaque on the Roman Wall survives from the churchyard’s conversion to a public garden in 1872 (Photograph: Patrick Comerford, 2020)