‘Rise – take your mat
and walk!’ Praying with
the people of Zimbabwe 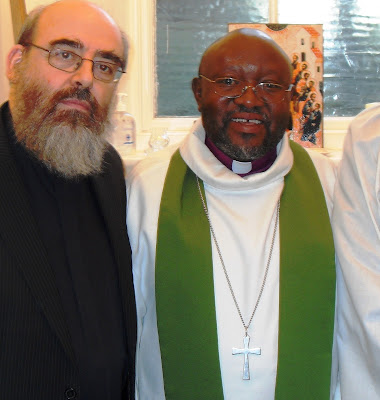 With Bishop Chad Gandiya, the acting principal of Bishop Gaul Theological College, during his visit to Ireland as Bishop of Harare

I found it difficult to understand at the end of 2017 how it took so long for Robert Mugabe to resign or be removed from office as President of Zimbabwe. Despite what seemed to be a military coup, it took him some time to step down, to accept his impeachment, and, until he died recently, he continued to deny that he had signed his own resignation.

He was a complex character, who claimed he had learned his values from Irish Jesuit missionaries and from the example of Gandhi. But when he became Prime Minister and then President, he betrayed those values and betrayed the trust many people had placed in him in the struggles and campaigns for a just, peaceful and democratic Zimbabwe that would replace the white, racist regime of Ian Smith’s Rhodesia.

Many years before Mugabe’s fall from power and his disgrace, I was frustrated and angry when I was invited to a lecture in UCD and dinner with Mugabe. At the time I was the Foreign Desk Editor of The Irish Times.

In previous years, I had campaigned and protested on his behalf, joining marches and pickets in London and Dublin demanding democracy and freedom in Zimbabwe. But that evening in the Belfield campus of University College Dublin, Mugabe was brusque, arrogant and rude.

I found is curious that while the Irish Independent could invite me, from The Irish Times to dinner on two separate occasions with Archbishop Desmond Tutu and President Nelson Mandela, my own newspaper was inviting me to meet Robert Mugabe, who had betrayed so much I had once campaigned for.

And yet, as we read this morning’s Gospel reading (John 5: 2-9a), it is good to remind ourselves that Christ’s healing comes as a promise not just to individuals but to people and to whole nations too.

As Mugabe was falling from power, with complete lack of grace, many people feared for the future of the churches in Zimbabwe. But Dr Chad Gandiya, Bishop of Harare, the capital of Zimbabwe, described what was happening as ‘one of the most peaceful takeovers anywhere in the world.’

However, Bishop Chad also urged Christians everywhere to pray for Zimbabwe ‘during these uncertain times.’ His colleague, Archbishop Albert Chama, admitted at the time that ‘this sad situation needs more than a political solution. It needs all people of faith to pray, all citizens to engage and ensure a peaceful transition in Zimbabwe.’

There was a marked contrast between Robert Mugabe and Chad Gandiya, and the attitude to the people of Zimbabwe from these two leaders who had lived many years in exile.

I got to know Bishop Chad when he was working in London as the Regional Desk Officer for Africa and the Indian Ocean for the Anglican mission agency USPG (United Society Partners in the Gospel). I have been a supporter of USPG all my adult life, and I am a trustee of USPG – I was in London for a trustees’ meeting for a full day two days ago [Wednesday 4 May 2020].

USPG is a long-standing partner of the Anglican Church in Zimbabwe, with a relationship that dates back to 1891, and among those we remembered in our prayers at the end of the meeting on Wednesday was Canon Noel Joseph Alexander Scott, an Irish-born missionary in Zimbabwe from 1969 to 2003, who died a month ago [6 February 2020].

When I first got to know Bishop Chad, he was overseeing projects for USPG such as health, leadership development, education and theological education. He has also been on the staff of the former United College of the Ascension in Birmingham, where I took a course in 1996. His decision to return to Zimbabwe in 2009, during difficult times, was brave and heroic.

He was elected Bishop of Harare as Mugabe was dividing the churches in Zimbabwe and encouraging a schismatic bishop and his breakaway church to use violence to take over many Anglican churches, including Harare Cathedral.

Churches, schools and charities in Zimbabwe were attacked, seized and forcibly closed, priests, teachers, care staff and church workers were threatened, intimidated and physically attacked, and ordinary Christians were beaten up and prevented from going to church.

On one occasion, Bishop Chad was held at gunpoint with his family while his home was ransacked. The gunmen were most interested in taking his communication equipment, targeting laptops and mobile phones while ignoring other portable valuables. All this was set out in a dossier when Archbishop Rowan Williams met Mugabe, and USPG was to the forefront in letting the world know about these attacks.

Yet, as Bishop of Harare, Chad found the time to accept my invitation to preach in the chapel of the Church of Ireland Theological Institute, to deliver a guest lecture, and to visit churches and cathedrals in Dublin, Kilkenny and Belfast and to meet friends and supporters of USPG.

As Mugabe fell from power, Bishop Chad asked people to pray for pray for peace, love, unity and development, for all people in Zimbabwe, and for justice and respect for human rights. He concluded with the prayer, ‘God bless Zimbabwe. Guide her leaders. Guard her people. And give her peace. Amen!’

It seems a prayerful coincidence that in the week the World Day of Prayer is using resources prepared by the women of Zimbabwe, the USPG Prayer Diary is focussing this week on ‘Theological Education: a Key Pillar of Mission,’ with a particular focus on Bishop Gaul Theological College in Harare.

This college takes its name from Bishop Billy Gaul, an early SPG missionary from Ireland. And, just a few weeks ago, Bishop Chad was called out of retirement and was appointed acting principal of the college.

Through the USPG Prayer Diary, I have been praying all this week for Zimbabwe, for the churches there, and in particular for Bishop Chad and his work and ministry.

Long after the USPG Prayer Diary has moved on from Zimbabwe to pray for other countries and other crises, the situation in Zimbabwe is still going to need our prayers as they continue to face political, social and economic crises.

Long after this World Day of Prayer, the women of Zimbabwe are still going to need our prayer.

Long after these days, the people of Zimbabwe will need to find ways live out the hope to ‘Rise – take your mat and walk!’

Please remember to pray for Zimbabwe, its people and its churches, its politicians and its Church leaders.

In the words of Bishop Chad, as Mugabe was falling from power, ‘God bless Zimbabwe. Guide her leaders. Guard her people. And give her peace. Amen!’