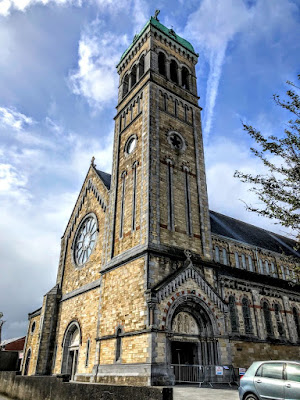 The Church of Saint Peter and Saint Paul is a towering Roman Catholic church in the centre of Clonmel, Co Tipperary (Photograph: Patrick Comerford, 2020) 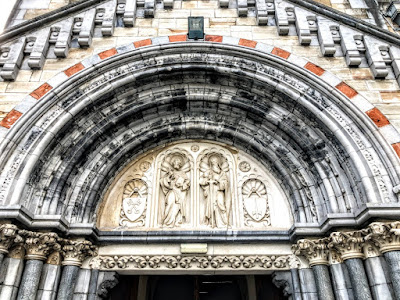 Saint Peter and Saint Paul above the main entrance to the church (Photograph: Patrick Comerford, 2020)

The Very Revd Dr Michael Burke was appointed to the new chapel as its first parish priest. He introduced the Sisters of Charity to Clonmel, as well as the Christian Brothers, who opened a school in Blind Street (Kickham Street) in 1847.

Father Burke was responsible for extending the then chapel and added a pointed tower. Although his tower was later replaced, the bell he installed in the belfry is still heard today.

Father Burke was the parish priest of Saint Peter’s and Saint Paul’s for 30 years, and died in 1866. He was succeeded by Father John Power, who remained until he was appointed Bishop of Waterford and Lismore.

Bishop Power was succeeded by his brother, Father Roger Power, who stayed just two years before leaving for Tramore, Co Waterford, in 1876. On his transfer to Tramore Saint Peter’s and Saint Paul’s became one of the mensal parishes of the Bishop of Waterford and Lismore, under the directions of administrators. 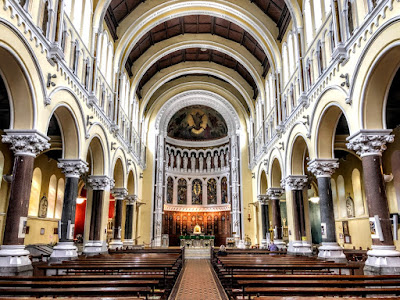 During his time in Clonmel, Father Roger Power planned a comprehensive scheme of church building. He obtained a design from an eminent Dublin architect, JJ O’Callaghan, for his planned work, but left Clonmel before the project began.

The plan for a new church, however, remained, and the new church was built in successive steps, the work being arranged so that each step should leave the church with a tolerably finished appearance and in fair working condition. When it was finished, the church had new aisles, new transepts, a new apse, a new and more elevated roof, a cloister, and finally a grand façade consisting of an ornamental front porch flanked by a baptistery on one side and a lofty campanile on the other.

On the death of Bishop John Power in 1887, his successor, Bishop Pierse Power, appointed a parish priest, the Revd Joseph A Phelan, who had been president for several years of Saint John’s College, Waterford. When he came to the parish, building operations had advanced but had left a heavy debt that had to be cleared before and further work could proceed. He organised weekly, house-to-house collections but he died unexpectedly in 1892.

Father Francis O’Brien was then transferred from Cappoquin, but his time in Clonmel was brief too, and he was transferred to Dungarvan in 1894. The Revd Thomas McDonnell returned to Saint Peter’s and Saint Paul’s for a second time, and became Dean when the diocesan chapter was revived. He died in 1906. 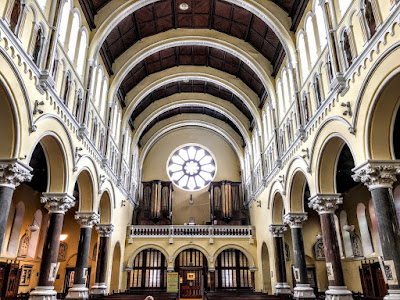 Archdeacon Cornelius Flavin, who moved to the parish in 1906, carried the church project closer to completion, erecting the altar and pulpit.

Monsignor William Walsh, who was transferred from Lismore in 1919, completed the church and on Sunday 1 July 1934 the new church was solemnly opened. Bishop Jeremiah Kinane of Waterford and Lismore consecrated the new church and Archbishop Richard Downey of Liverpool, who was born in Kilkenny, preached the sermon.

Dean Walsh died in December 1935 and was buried in the church grounds. He was succeeded by Monsignor William Byrne and Saint Peter’s and Saint Paul’s was officially established as a parish on 8 February l936. 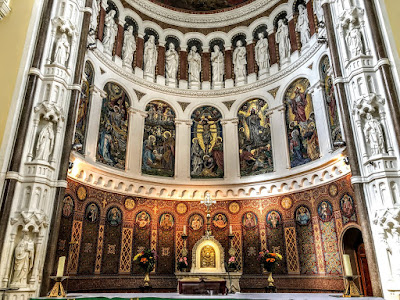 The mosaic decoration in the chancel is the work of Ludwig Oppenheimer of Manchester (Photograph: Patrick Comerford, 2020)

The Romanesque style of the church was an unusual choice for O’Callaghan, but not for Ashlin. The mosaic decoration in the chancel is also characteristic of Ashlin, and is the work of Ludwig Oppenheimer of Manchester.

This Romanesque-style church stands on a prominent site on Gladstone Street and its distinctive tower is visible over much of Clonmel. It has a nine-bay nave with side aisles and bowed apse, a four-stage entrance tower at the south-east, a two-bay, two-storey parish office at the south-west and a two-bay, single-storey sacristy at the north-west. 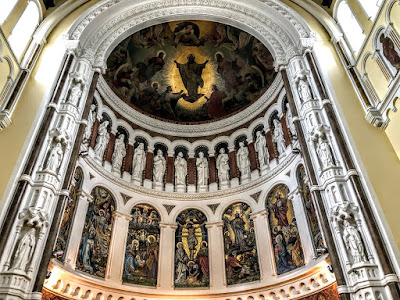 The Ascension depicted in the apse above the mosaic decoration (Photograph: Patrick Comerford, 2020)

To meet post-Vatican II liturgical changes, the church was altered in 1974, when the pulpit was dismantled and re-used to support the tabernacle. But the church retains much of its original form, with fine craftwork in the window surrounds, hood-mouldings and finials.

The highly-ornate interior – particularly the apse with its Oppenheim gold-leaf designs – is a considerable artistic achievement. Other features worth watching out for include the stained-glass windows, including some from the Harry Clarke Studios. Ashlin’s Germanic square tower, crowned with a curvilinear dome, is instantly recognisable and is similar to designs Ashlin used in Limerick and Newry. 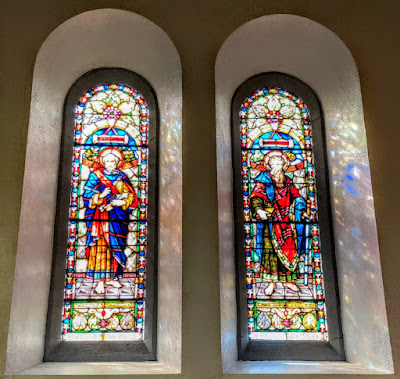 Saint Peter and Saint Paul depicted in a pair of windows in the church (Photograph: Patrick Comerford, 2020)

As always I have found your blog both interesting and informative.
However I am sorry to note a common error in the general identification of stained glass windows between Earley and Clarke.
The stained glass in SS. Peter and Paul's Church in Clonmel is wide ranging in style and age but none of it is by Harry Clarke.The oldest windows are from Mayer & Sons (one being signed) and are c.1882-1906. These are all situated in the chancel and are eight in number. Along each aisle at gallery level there are ten windows. The North aisle begins at the chancel arch with 'The Sacred Heart' dated 1909 and from Joshua Clarke's studios signed Clarke & Sons. The next eight windows are by William Earley(1872-1956) one being signed 'Earley-Dublin' all dating from the 1930s. The final window on the North aisle is of 'St Teresa' and is probably Mayer's from late 1800s. On the South aisle starting at the chancel (above the present entrance) are two modern windows (Pope John Paul and St Brigid). Next is 'The Annunciation, most probably by John Bishop Earley c.1900. The next four windows (Visitation,Nativity,Presentation,Finding in the Temple), are by William Earley. Two modern windows follow and slightly incongruously the last window is a beautiful window of St Michael by W.Earley c 1934 (signed). Final count: Earley & Co. 14, Mayer 9, Contemporary 4, and Joshua Clarke 1. (To the best of my knowledge and with apologies to 'Contemporary' which I leave to someone else to identify).