The names and stories
behind some colourful
narrow lanes in Wexford 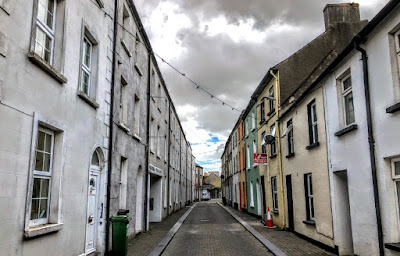 Archer’s Lane once emerged on High Street opposite the house where I lived in the 1970s (Photograph: Patrick Comerford, 2020)

One of the joys in life that never loses its appeal for me is strolling through the narrow streets and lanes of Wexford. They are particularly charming on a bright summer’s day and there is always something new to discover – or even to be startled by.

I was back in Wexford at the end of last week as this year’s late summer ‘Road Trip’ continued into September. Each morning, I enjoyed waking up in the Ferrycarrig Hotel to the sun rising above the estuary of the River Slaney at Ferrycarrig, where the mouth of the river looks as beautiful as a lake in northern Italy or Switzerland.

Some of those lanes have disappeared over time, others seem to survive against all odds, and even those that are long gone live on in the memories and writings of Wexford’s prolific local historians. 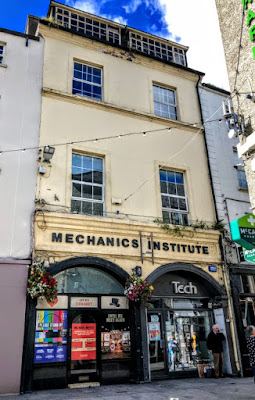 Archer’s Lane ran from steps built over by the Mechanic’s Institute and later the shopfront of the ‘Wexford People’ (Photograph: Patrick Comerford, 2020)

When I was working in the Wexford People on North Main Street and living on High Street in the early and mid-1970s, I was told how Archer’s Lane once ran from North Main Street, opposite Anne Street, through one of the arches of the building originally built for the Mechanics’ Institute in 1849, through what was the ‘People Office’ and the caseroom and printing works, and emerged out onto High Street, opposite the house where I lived.

The only sign of Archer’s Lane today is the arches that shape two shop fronts on North Main Street and the bay on High Street once used by the delivery vans of the People but now part of the entrance to the National Opera House. 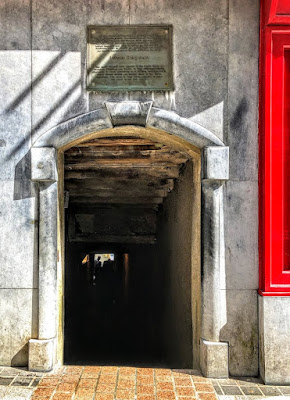 You have to stoop your head to enter the east end of Keyser’s Lane (Photograph: Patrick Comerford, 2020)

Keyser’s Lane is, perhaps, the most exotic of laneways off South Main Street, and it is a lane of two parts.

The east side of Keyser’s Lane starts at steps leading down under a small archway on South Main Street and continues on to the car park on Crescent Quay. Dating back to Norse times, this lane once marked the boundaries of the mediaeval town parishes of Saint Patrick’s and Saint Iberius’s.

Keyser’s Lane is so old that writers were speculating about its origins as far back as the 16th century. Before you stoop down to enter Keyser’s Lane, a plaque above the archway, at eye-level, reads:

‘The name Keyser’s Lane appears in the Norse towns of Wexford, Waterford and Dublin. In 1575 Holinshed’s Dublin Chronicles is found speculating as to its long forgotten origin. These Keyser streets ran steeply down to the Norse waterfront. The name, in saga Norse, appears to mean ‘the street of the ship wharfs’.’ 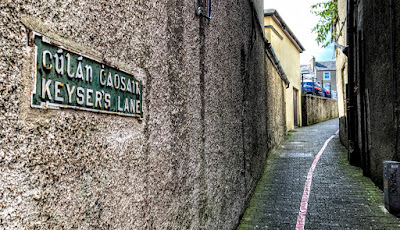 Like so many streets and lanes in Wexford, Keyser’s Lane has more than on name: the east end of it is also known as Slegg’s Lane and some local people also know it Cromwell’s Lane, probably because Cromwell is believed to have stayed nearby in Kenny’s Hall, once Woolworth’s and now Penney’s.

The west side of Keyser’s Lane is on the opposite side of South Main Street, and leads up, once again, to High Street. In Irish it is named as Cúlán Chaosair, which makes it sound more like Caesar’s Lane or narrow-way. 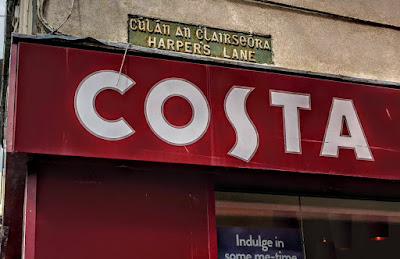 Harpur’s Lane is also known as Cinema Lane, and was also known in the past as Hay’s Lane. The plaque above the Costa coffee shop, however, names it in English as Harper’s Lane and in Irish name as Cúlán Chláirseóra, in other words the ‘Harpist’s Lane.’

But Harpur’s Lane is named not after someone named Harper or, for that matter, after a harpist. It probably takes its name from the Harpur family, whose members included Alderman Thomas Harpur (1846-1826), Mayor of Wexford in 1886-1887 and a corn merchant with premises on South Main Street.

The more popular name of Cinema Lane comes from the Palace Cinema, a 600-seat cinema that opened there in 1914 and was the first proper cinema in Wexford Town. 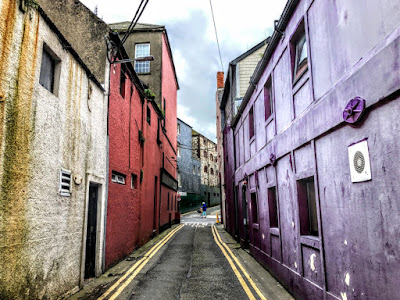 Cinema Lane rook its name from the Palace Cinema … and was the location of an unsolved murder in 1958 (Photograph: Patrick Comerford, 2020)

When I wrote six weeks ago (29 July 2020) about the murder in the Cape Bar or Con Macken’s of Mary Anne Wildes by Simon Bloom in 1910, many comments confused that murder with a murder almost half a century later in Cinema Lane.

William Hannan (65) was found unconscious and badly beaten in his shop, ‘The Dainty,’ on Cinema Lane on 8 March 1958. The late-night attacker or attackers may have had fled across rooftops of Cinema Lane and made good their escape along Henrietta Street. Their victim died of his wounds the next morning.

The garda investigation turned up no credible leads, and no-one was ever charged afterwards. The murder of William Hannan remains unsolved to this day. Although it is still talked about in Wexford, justice has never been seen to be done. 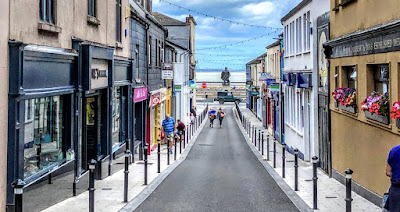 Henrietta Street runs parallel to Cinema Lane and runs down to the Crescent (Photograph: Patrick Comerford, 2020)