A Limerick architect
and engineer who also
worked in Askeaton 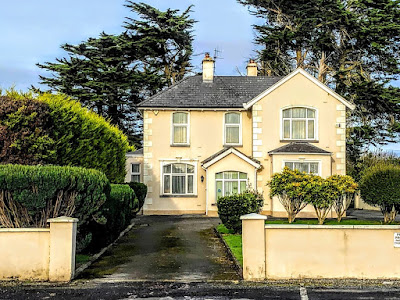 The Parochial House or Presbytery in Askeaton, Co Limerick, was designed by the architect and engineer Brian Edward Fitzgerald Sheehy (Photograph: Patrick Comerford, 2020)

The old rectory in Askeaton, Co Limerick, now known as Ballindeel House, was designed by the celebrated Limerick-based architect James Pain, who probably also designed Saint Mary’s Church, the Church of Ireland parish church, which was rebuilt at the same time.

The Parochial House or Presbytery was designed by Brian Edward Fitzgerald Sheehy (1870-1930), who worked as an architect and engineer in Limerick from the 1890s until the 1920s, and it was built in 1911 by the well-known church builders John Ryan & Son.

Brian Sheehy was born on 26 September 1870, the son of George Lake Sheehy, a ‘gentleman farmer’ of Moviddy, Newcastle West, and Elizabeth (nee Fitzgerald).

He was educated at Blackrock College, and was then articled to the Dublin-based architect and engineer Samuel Gordon Fraser of Dublin.

Sheehy had returned to Limerick by 1903, and was in private practice from then, living at 57 O’Connell Street (formerly George’s Street). He married his wife, Elizabeth Sheehy, daughter of Major Brian E Sheehy, of Cherrygrove, on 28 October 1908 in Croom, Co Limerick. She was a sister of the barrister Richard J Sheehy.

Sheehy was the engineer with the Newcastle West District Council, the old District Council and Board of Guardians of Croom and the Co Limerick Health Board, and he was the architect to the Thomond Artisans’ Dwellings Company, Limerick, and the Ennis Asylum Board, Co Clare. As a consulting engineer, he frequently appeared in court as an expert witness.

During his career, he carried out a large number of engineering schemes, water, sewerage, and buildings in Munster.

He also worked on alterations and extensions for Saint Munchin’s College, Limerick (1909-1911) and the Municipal Technical Institute on O’Connell Avenue, Limerick (1923-1926) and convents, schools, banks, hotels and factories throughout the south-west and mid-west.

His best-known and most successful church building must be Saint Colman’s Church, Kilcolman, Co Limerick, built on a difficult and challenging site in 1912-1913.

Sheehy’s pupils and assistants included the architect and engineer Patrick John Fitzgerald Munden (1883-1962), who was working with him in from 1910 to the end of 1912, while the parochial house, school and library were being built in Askeaton. A few years later, Munden was involved in the Howth gunrunning, and was arrested in Dublin Castle in 1916. Munden was an unsuccessful independent candidate in the 1923 elections, but he sat on Rathmines Town Council.

Sheehy died at the age of 59, on 6 January 1930 at his home, 57 O’Connell Street. The Limerick Chronicle reported his death the next day and noted that he ‘was a member of an old West Limerick family.’ 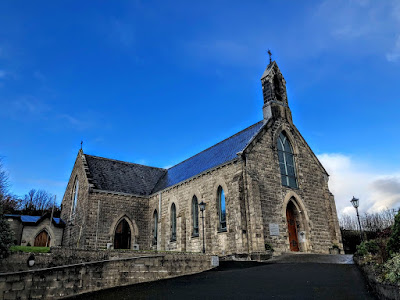