200 years later, Greece
remembers the Irish
people involved in
the War of Independence

The Acropolis in Athens … one of the first military actions of Sir Richard Church was an attempt to relieve the besieged tiny Greek garrison (Photograph: Patrick Comerford)

Among these is the poet Lord Byron, but he and others are often typecast as English. This happens so often in the writing of history that few people are aware of the many Irishmen who were also Philhellenes.

Many of those Irish Philhellenes, such as Sir Richard Church (1784-1873) from Cork, were also members of the Church of Ireland. I first became aware of Church and the Irish Philhellenes during one of many working visits to Athens in the 1990s. I noticed a plaque in Saint Paul’s, the Anglican Church in the city centre that claims he won the affection of the people of Greece ‘for himself and for England.’

Yet Church was the leading Irish Philhellene and was once described as the ‘liege lord of all true Philhellenes.’ 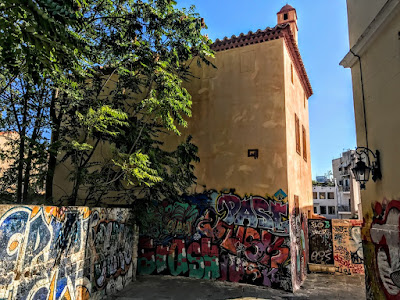 Richard Church’s former house in the Plaka, beneath the slopes of the Acropolis … now covered in graffiti (Photograph: Patrick Comerford)

Sir Richard Church was born in Cork into a prominent Quaker merchant family. But he ran away to join the army and later became an Anglican. As a 16-year-old ensign in 1800, he visited Greece for the first time. Later, he married Elizabeth Augusta Wilmot, sister-in-law of the Earl of Kenmare.

When the War of Independence broke out in 1821, Church hoped he might become involved in the Greek cause. The Greek revolutionary Theodoros Kolokotronis wrote to him asking: ‘What are you doing? Where are you to be found? … I expected you here before other Philhellenes … Come! Come! and take arms for Greece: or assist her with your talents, your virtues, and your abilities, that you may claim her eternal gratitude.’

Church landed to a hero’s welcome on 9 March 1827, and was sworn in as the Greek commander-in-chief on Easter Day, 15 April 1827. One of his first actions was a disastrous attempt to drive off the Turkish force besieging the tiny Greek garrison in the Acropolis in Athens.

When Athens became the Greek capital in 1834, Church and his wife moved into a house at No 5 Odos Scholeiou, off Adrianou in the Plaka and beneath the slopes of the Acropolis. He became a life senator and remained active in Greek politics until he died in his ninetieth year on 27 March 1873. He was honoured with a state funeral in Saint Paul’s Church and was buried in the First Cemetery of Athens, close to the heroes of the War of Independence. In a funeral oration, he was described as ‘the truest Hellene, the most steadfast and most affectionate of the sons of Greece.’

The simple inscription on his grave reads: ‘Richard Church General who having given himself and all that he had to rescue a Christian race from oppression and to make Greece a nation lived for her service and died amongst her people rests here in peace and faith.’ But his former house in the Plaka was long abandoned and covered in graffiti. 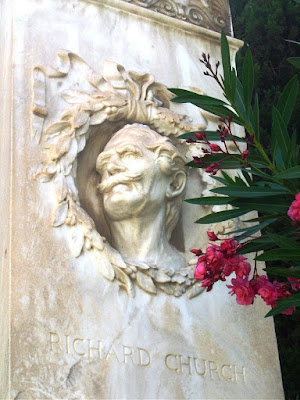 Charles Napier, Greek
down to his toenails

Sir Charles Napier (1782–1853) from Celbridge, Co Kildare, was a descendant of Charles II but was also a first cousin of the 1798 revolutionary Lord Edward FitzGerald.

Napier first arrived in the Ionian Islands in 1819. He was appointed the British resident or colonial governor of Kephalonia, known to many as ‘Captain Corelli’s island.’ There he was an ‘enlightened despot’ during what ‘was probably the happiest time in his life.’

Long after Byron’s death, Napier continued to hope he would become the Greek commander-in-chief, hopes harboured too by his friends among the Greek leadership, including Kapodistrias and Mavrokordatos. But the appointment never came.

Napier compared the Greeks with his own people: ‘The merry Greeks … are worth all other nations put together. I like to hear them; I like their fun, their good humour, their Paddy ways, for they are very like Irishmen. All their bad habits are Venetian; their wit, their eloquence, their good nature their own.’ He also once declared: ‘I am a Greek down to the nails of my toes and the marrow of my bones.’ 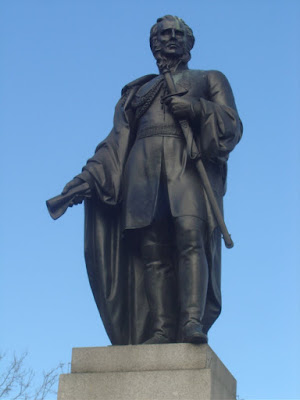 Napier eventually left Kephalonia, leaving his Greek-born daughters behind. He returned occasionally to Ireland, but eventually made his name as the Conqueror of Sind in India.

But he made no secret that he still harboured hopes of being appointed Lord High Commissioner of the Ionian Islands, which remained a British colony until 1864. His affection for the Greek people continued in his final years and in 1851 he wrote: ‘I always think of my second country, the (to me) dear island of Cephalonia.’

Until he died in 1853, he held on to Koutoupi, his house and small plot of land in Argostoli. He explained in a letter to Metaxa: ‘I keep Cutupi because I love Cephalonia; were I younger I would go and live among you a private gentleman; but I am seventy, and the night closes fast upon me.’ One historian says, ‘few who bore the name Philhellene deserved it so well.’

Napier’s daughters, who had been left behind in Kephalonia, were eventually taken to Ireland by Edward Curling, who later moved to Newcastle West, Co Limerick. Napier’s brother, Sir William Napier, is a direct ancestor of Archbishop Justin Welby of Canterbury. 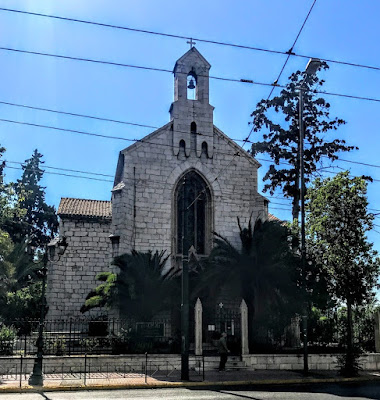 Sir Edward Fitzgerald Law (1846-1908) became involved in securing Greek economic independence long after most of the Philhellenes. I might have passed by Law’s contribution to making Greece an independent, modern state, except I came across his name by accident on two, successive occasions: reading a description of a visit to Athens by his cousin, Archbishop John Allen Fitzgerald Gregg, and researching the biographical details of his father’s cousin, the Revd Patrick Comerford Law (1797-1869) of Killaloe.

Edward Law was born in Rostrevor House, Co Down, a son of Michael Law, later a director of the Bank of Ireland, and his wife Sarah-Ann, daughter of Crofton FitzGerald. The Law family was a long-established clerical family in the Church of Ireland, and family members included the Revd Francis Law (1768-1807), who married Belinda Isabella Comerford, and the Revd Patrick Comerford Law (1797-1869).

He presided over the finances of Greece in the 1880s and 1890s, restructuring the Greek debt and the nation’s economy, to the lasting advantage of Greece. He married Catherine (Kaity) Hatzopulo, from an old Byzantine family, in 1893, and they settled in Athens. There he became involved in the Greek struggle for autonomy on the island of Crete for autonomy and its eventual unification with Greece in 1908.

Law was knighted in the British honours system in 1898 and died in Paris on 2 November 1908. He was given a state funeral in Athens on 21 November. Crown Prince Constantine (later King Constantine I) and the entire Greek cabinet attended his funeral service in Saint Paul’s Anglican Church.

The graveside eulogy in the First Cemetery was delivered by a future Prime Minister, Nikolaos Kalogeropoulos. One Greek newspaper, Neon Asti, commented: ‘He loved Greece with the devotion of a son … he was a Greek at heart. As he felt for Greece, more than a Greek, he watched over her, advised her and warned her.’

At least 31 people of Irish birth or with an Irish identity played a public role in Greek political life during the struggle for independence and in the consolidation of the modern Greek state later in the 19th century.

In Athens, Gladstone unveiled a memorial to Church in Saint Paul’s Church, where there are two windows to his memory. There are statues to Napier in Trafalgar Square and Saint Paul’s Cathedral, London, and there is plaque commemorating Sir Edward Law in Saint Patrick’s Cathedral, Dublin. But the Irish Philhellenes are often forgotten at home in Ireland.

Tzortz Street, close to Omonia and the Polytechnic in Athens, was named after Church, using a transliteration of his name as he spelt it in Greek. The spelling ‘Tzortz’ remains on the nameplates in Greek at each end of the street, but on most pillars and maps ‘Tzortz’ is badly transliterated from Greek into English as ‘George’ rather than ‘Church.’

Similarly, Law’s only memorial in Athens is a street named after him. A year after his death, the city council agreed unanimously to name a street in central Athens after him. His cousin, John Allen Fitzgerald Gregg, Archbishop of Armagh, visited Athens in 1951. When the Mayor of Athens was told of the archbishop’s kinship with Law, he invited Gregg to return as the guest of the municipality – ‘an offer which I fear I cannot hope to take advantage of.’

But this street is usually transliterated into English from the Greek as ‘Eduardo Lo’ – making it impossible for most pedestrians and passers-by to identify him. 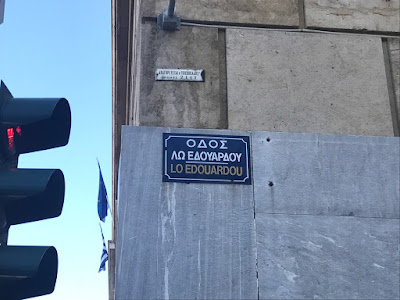 The names of Sir Richard Church and Sir Edward Law on street names in Athens … with poor transliterations into English (Photograph: Patrick Comerford) 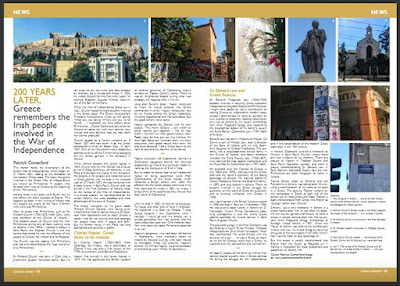