Three churches and one
churchyard at Kilkeedy,
near Clarina, Co Limerick 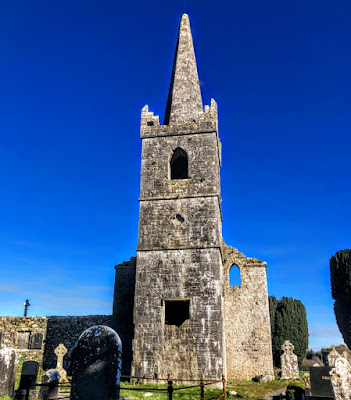 The early 19th century church at Kilkeedy stands on the site of a mediaeval church and beside a later Victorian Gothic revival church (Photograph: Patrick Comerford, 2021)

The church site at Kilkeedy, just north of Clarina in Co Limerick, is the site of not just one, or even two churches, but of three churches and a churchyard with the graves and vaults of many local families.

The remains of the mediaeval church were incorporated into an early 19th century church, built in 1813, and this in turn was replaced by a Gothic-style Victorian church, built in 1868 – although this too has been closed for over half a century and has been converted into a private family home.

I had missed these three churches during an earlier visit to Carrigogunnell Castle nearby and was delighted to find them during a walk in bright spring sunshine.

The earliest building is now only fragmentary and appears to be aligned north-south. This seems to indicate it may not have been part of the main mediaeval church, and that the site of the mediaeval church is now occupied by the early 19th century church. 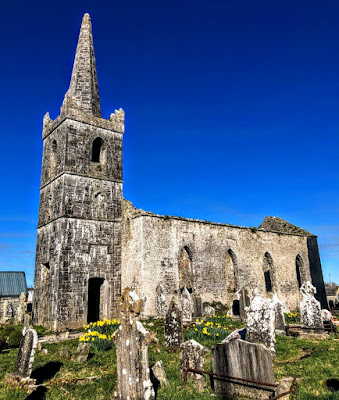 The 19th century church at Kilkeedy, seen from the south, in the midst of the churchyard (Photograph: Patrick Comerford, 2021)

The church site is a rectangular area, measuring about 43m north to south and 68m east to west, and enclosed by a stone wall with an entrance gate and stile in the west wall. There is a modern graveyard extension to the south and east.

The first church on the site is said to have been founded by a monk or saint known as Caeide or Caeide, who is said to have given his name to the site and who is mentioned in many documents, including the Annals of the Four Masters in 1599. 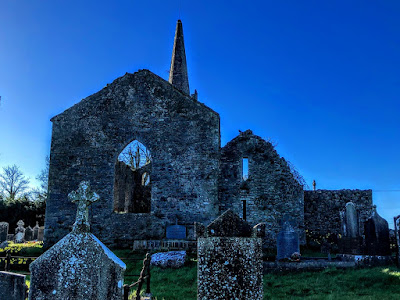 Part of the mediaeval church survives like a north wing of the early 19th century building. It measures 8.85 m (29 ft) north to south and 5.5m (18 ft) east to west, and a fragment to the east also remains.

The Limerick historian and archaelogist Thomas Johnson Westropp (1860-1922), who was from nearby Patrickswell, suggests the small building at the north side of the church was a ‘priest’s dwelling.’ 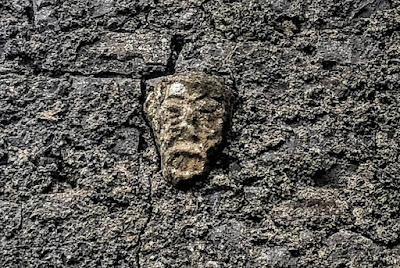 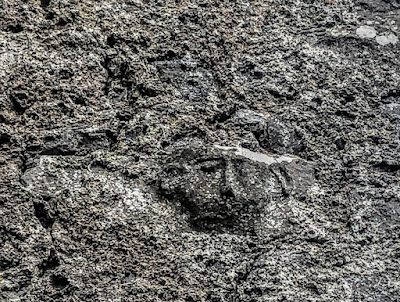 Two mediaeval heads are incorporated into the west wall of the early 19th century church, in the north-west angle (left) and the south-west angle (right) (Photographs: Patrick Comerford, 2021)

Other mediaeval features survive in two mediaeval heads incorporated into the west wall of the early 19th century church.

The north-west head is a carved sandstone head with oval-shaped eyes, grooved cheeks and an open mouth with a broken nose and small ears. The grooving of the cheeks along with the open mouth gives the face a grotesque appearance. The surface of the head displays a lot of weathering with flaking visible around the mouth and along the sides of the head.

The south-west head is a carved stone head with oval-shaped eyes, a long angular nose and large protruding ears.

At the east end of the early 19th century church there is another section of wall that was part of the mediaeval structure too. 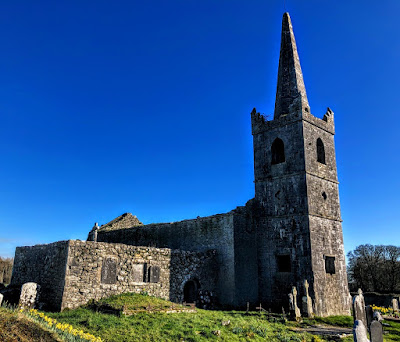 Kilkeedy Church from the north-west, with the Monsell chapel on the north side (Photograph: Patrick Comerford, 2021)

The earliest reference to a church on this side is in 1201 when it was known as Kelliedun in 1201. It was referred to as Kilkid or Kylkyde in 1302, when Thomas de Burgo held the vicarage. The first priests of the parish are recorded in 1329, when John de Preston was rector and vicar of ‘Kilkide.’ The right to present a vicar had lapsed to the Pope by 1369.

By 1410, it was noted that the church in Keilchidy was dedicated to Saint Simon and Saint Jude. By the early 15th century, the Priors of Athassell, Co Tipperary, were the Rectors Kilkydy. This continued until the time of the Reformation, and Athassell, along with Kilkeedy and its other rectories, were granted to G Moore in 1578.

The church was a neat building, with a square tower and octagonal spire. At the time, the parish was a rectory and vicarage, in the alternate patronage of the Crown and the Bishop of Limerick, and the Revd Richard Dickson was the rector for almost seven decades from 1799 to 1867. 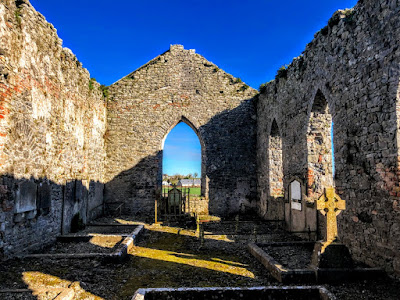 The church, which no longer has a roof, was built with a three-stage square-plan tower at the west end and a four-bay nave. The tower has a hexagonal limestone spire and crenellations at the corners. The walls are of rubble limestone with cut-stone stringcourses on the tower and a cut limestone eaves course at the nave.

The north-west block attached to the church was adapted as the Monsell family mausoleum.

There is a tradition about Kilkeedy graveyard that on the way to a burial the coffin is laid on the wall outside the church and the mourners get to their knees and pray before continuing into the graveyard. This custom is said to date from Penal times.

The churchyard includes tombs of the Copper family of Copperhill and the Monsell family of Lord Emly, and the vault of the Massey family of Lord Clarina dated 1865. Earlier headstones include those of Danl. O’Brien (April 1700) and Laurence Madden, who died on 21 August 1748, aged 48. 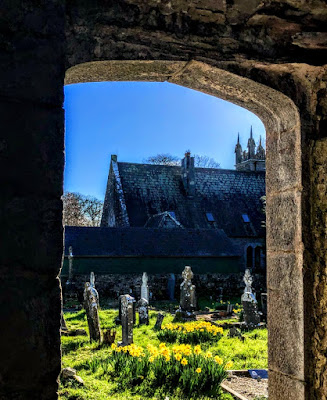 The Revd Richard Dickson was the Rector for almost seven decades until he died in 1867. He was succeeded by the Revd John Mullock Maguire (1810-1876), whose wife Anne Jane was a sister of the hymnwriter Cecil Frances Alexander.

A year later, the neighbouring church dedicated to Saint Philip and Saint James was built in 1868 to replace the earlier church. It was designed in the Early English style by the architect James Edward Rogers (1838-1896). This church had a three-bay nave and a south porch, a one-bay chancel with a vestry on the north side and a bellcote on the south side of the west gable.

The architect and artist James Edward Rogers was born in Dublin in 1838 and went to Guildford Grammar School before matriculating at Trinity College Dublin in 1855. He then became a pupil of Sir Thomas Newenham Deane’s partner, Benjamin Woodward, while Woodward was working on the Oxford Museum.

Rogers visited the site at Oxford on more than one occasion, and befriended two leading Pre-Raphaelites, William Morris and Dante Gabriel Rossetti. At the time, they were decorating Woodward’s debating hall at the Oxford Union with scenes from Arthurian legends, and the three went ‘hunting in the parish churches on Sunday evenings to find a Guinevere.’

From 1865, Rogers was living in Cambridge Road, Rathmines, and he was the architect to the Diocese of Meath until the disestablishment of the Church of Ireland in 1869. By 1870, Rogers had moved to 179 Great Brunswick Street, where his friends James Franklin Fuller and William Stirling also had their offices. Most of his recorded work was in connection with the Church of Ireland, and at this time he designed or worked on churches in Dublin and the west of Ireland. 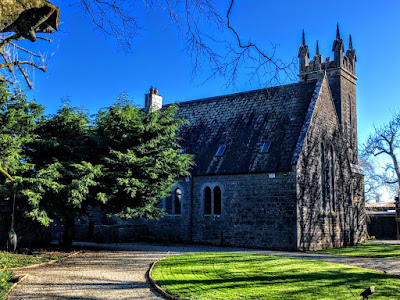 The church designed by James Edward Rogers in 1868 is now a private house (Photograph: Patrick Comerford, 2021)

Rogers’s abiding interests were drawing and painting in watercolours rather than architecture. He exhibited at the Exhibition of Fine and Ornamental Arts in Dublin in 1861 and at the Royal Hibernian Academy from 1870 on. He was elected an associate of the RHA in 1871.

Rogers was elected a Fellow of the Royal Institute of British Architects (FRIBA) in 1874, proposed by James Franklin Fuller, James Joseph McCarthy and Thomas Newenham Deane. But Rogers resigned as FRIAI in October 1874 and moved to London in 1876. He does not appear to have practised as an architect there, and he resigned as FRIBA in 1877. He continued to exhibit his paintings at the Royal Hibernian Academy until he died. He also exhibited at the Royal Academy, at the Irish Exhibition in London, and at exhibitions of the Dublin Sketching Club and the Dublin Art Club.

Many of his paintings are of subjects in Holland and Germany. Rogers and his friend, the Revd John Pentland Mahaffy, future Provost of TCD, published Sketches from a tour through Holland and Germany in 1889. He also illustrated Troubadour-Land: A Ramble in Provence and Languedoc (1891) by the historian and hymn-writer, the Revd Sabine Baring-Gould (1834-1924), who is best remembered for hymns such as ‘Onward, Christian Soldiers’ and ‘Now the Day Is Over.’ 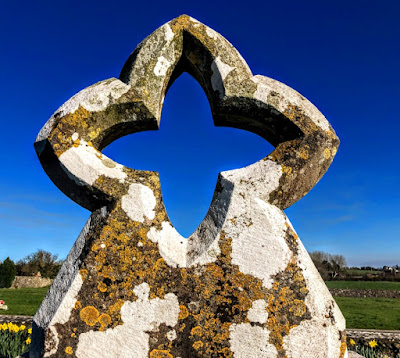 A gravestone in the churchyard at Kilkeedy (Photograph: Patrick Comerford, 2021)

Kilkeedy parish was united with Kilcornan from 1954 to 1958, then with Saint Michael’s, Limerick, from 1958, and with the Saint Mary’s Cathedral Group in 1967-1970. The church at Kilkeedy designed by Rogers closed and sold ca 1970, and was converted to a private dwelling.

In recent years, local people raised £14,500 from their own resources, the Church of Ireland, West Limerick Resources, FAS and local businesses to restore the early 19th century church at Kilkeedy and the graveyard as a site of archaeological importance.

The restoration work was a five-year project. When ivy was removed from the steeple of the old church, it was in a dangerous state, needing specialist treatment. The steeplejacks found 15 ft of stonework had to be removed, numbered and replaced. 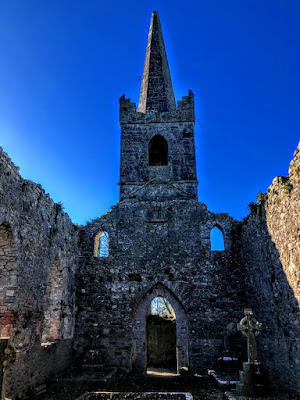 Inside Kilkeedy Church, looking towards the west end and the tower (Photograph: Patrick Comerford, 2021)

On the advice of Duchas, no sandblasting, power hosing or use of chemical agents was allowed in cleaning the headstones. Roots and tree stumps could not be dug out and rubble mounds could only be removed under the supervision of an archaeologist. The ground level was not to be disturbed, and professional landscapers could not use mechanical equipment.

Cement-based mortar was forbidden in restoring the spire and parapets. The original stone had to be used where possible and the work was recorded in photographs.

Setbacks included the theft of an 18th-century headstone, the incorrect rebuilding of a vault wall and window and the inappropriate use of cement mortar.

The rediscovery of the two mediaeval carved stone heads on the church was a bonus, along with architectural fragments believed to come from an earlier church on the site. 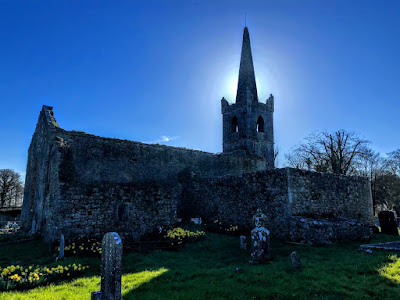 The north side of Kilkeedy Church (Photograph: Patrick Comerford, 2021)