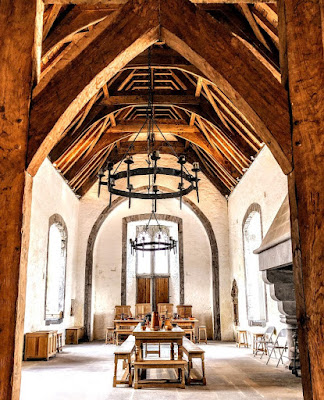 When museums and archaeological sites opened to the public once again as pandemic lockdown restrictions eased, one of the first sites to visit last weekend was the Desmond Banqueting Hall in Newcastle West, Co Limerick.

After more than four years in this parish, I am still coming to grips with the way the Church of Ireland in past decades transferred, closed or abandoned parish churches in many large towns across a large swath of west Limerick and north Kerry, including the parish churches in Newcastle West, Listowel, Abbeyfeale and Ballybunion.

The outline of Saint Thomas’s Church, the former parish church in Newcastle West, is now traced in a knee-high wall on the south side of The Square, below the walls of the Desmond Banqueting Hall that was once one of the main buildings in the Desmond castle that dominated the town for centuries. Within these boundary walls is a bronze figure representing Gerald FitzGerald, 3rd Earl of Desmond. 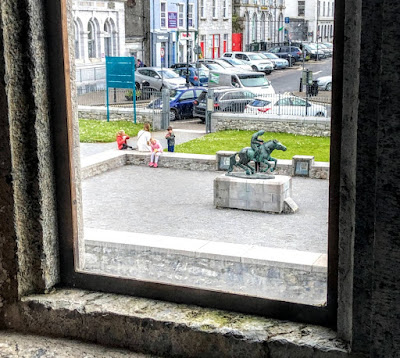 The outline of Saint Thomas’s Church seen from a window in the Banqueting Hall (Photograph: Patrick Comerford, 2021)

William Courtenay (1742-1788), 2nd Viscount Courtneay and de jure 7th Earl of Devon, paid to build Saint Thomas’s Church in 1777 in the centre of the new town he was laying out.

As the local landlords in Newcastle West, the Courtenay family were benign patrons of the church, building both the Church of Ireland and the Roman Catholic parish churches, and their patronage is reflected in the names of streets in the town, including Bishop Street and Church Street. 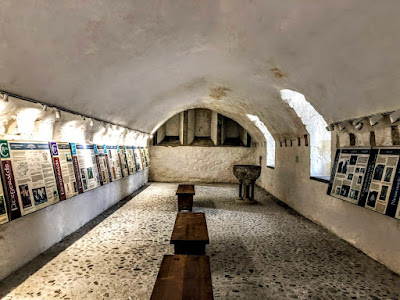 Recent restoration reveals the remains of a triple lancet window at the centre of the east wall (Photograph: Patrick Comerford, 2021)

Archaeologists and historians suggest that the Banqueting Hall within the castle may also have built on the site of the earliest church or chapel in Newcastle West.

Local lore suggests a Templar origin for the first castle in Newcastle West, built ca 1184. However, there is no evidence for this, and Westropp suggested in 1909 that the Templar legend arose from a misinterpretation of the Irish word teampul for church. 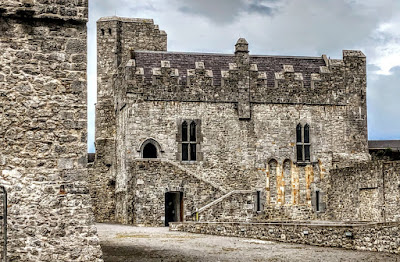 The south face of the Banqueting Hall was lit by a row of four lancets 3.5 metres tall (Photograph: Patrick Comerford, 2021)

The Desmond Banqueting Hall, an imposing, two-storey building, is the only building of substance dating back to this early castle. The castle was begun in the 13th century by Thomas ‘the Ape’ FitzGerald. However, most of the spacious, imposing structure was created in the 15th century, at the height of the power of the Earls of Desmond.

A full description of the Banqueting Hall and a reconstruction of the castle is provided by Dr Daniel Tietzsch-Tyler in the North Munster Antiquarian Journal, Vol 51 (2011), pp 27-51. He argues convincingly that although this building may have been an early hall it is more likely to have been a chapel.

The hall, vaulted lower chamber and adjoining tower were built in the 15th century, incorporating the structure of an earlier 13th century chapel of similar size. It was extensively remodelled, with the insertion of a low barrel vault to support a second-storey structure lit by lancet windows.

The east end of the south face of the building was lit by a row of four lancets 3.5 metres tall, and recent restoration has revealed the remains of a triple lancet window at the centre of the east wall. These reflect the origins of this building as a chapel or church. 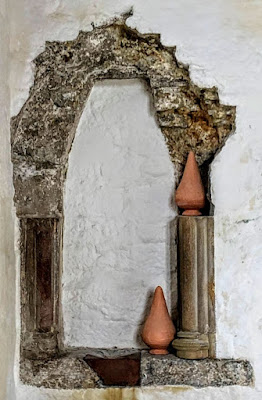 The piscina in the south-east corner of the first floor hall may have came from the earlier chapel (Photograph: Patrick Comerford, 2021)

A piscina inserted into the south-east corner of the later first floor hall possibly came from this earlier chapel.

In the absence of any other stone building from that time, the building might have been a hybrid hall-chapel, subdivided by screens. The complete remodelling of the early hall-chapel into the banqueting hall was carried out by James FitzGerald, 7th Earl of Desmond, between 1420 and 1463.

The restored mediaeval features include and oak musicians' gallery and a limestone hooded fireplace.

The former baptismal font was returned to Newcastle West in 2018, and can now be seen in the Banqueting Hall. The font, made of Caen Stone, bears the inscription, ‘One Baptism for the Remission of Sins.’ 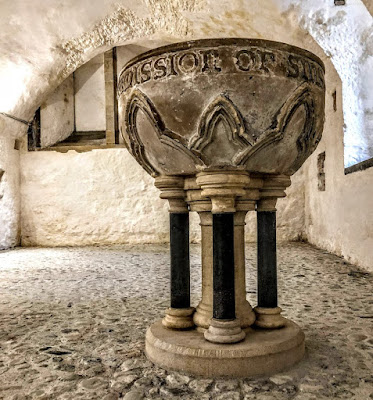 The former baptismal font was returned to Newcastle West in 2018 (Photograph: Patrick Comerford, 2021)