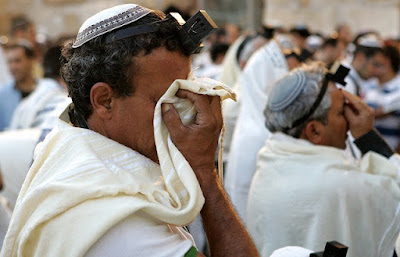 Can physical sight contradict and weaken our inner or spiritual sight?

There is a story about Rabbi Yosef Kahaneman (1886-1969), a prominent Lithuanian rabbi. After the Holocaust, he tried to find Jewish children whose parents had hid them during World War II.

Rabbi Kahaneman would walk through orphanages in Europe, reciting the beginning of the Shema. Instinctively, some of the children would cover their eyes, and cry out, ‘Mama, Mama!’

It is a universal Jewish custom to cover the eyes with the right hand when saying the first six words of the Shema. It is said that in doing this, the person who is praying is enabled to concentrate properly without visual distractions.

It is also said it is even more important to have the proper intention when reciting the first verse of the Shema than when reciting other parts of prayer. As the words are said, the focus is not just on the meaning of the words, but also on accepting the yoke of heaven.

The person saying the Shema is expected to concentrate on the idea that God is the one and only true reality. This intention is so important that one who recites the words of this verse but does not think about its meaning is expected to recite it again.

In my reflections on this Friday evening, I am reminded that this custom of covering the eyes is traced back to the times of the Mishnah, when Rabbi Yehuda HaNasi (Judah the Prince) covered his eyes while reciting the first verse of the Shema.

The kabbalists, especially Rabbi Yitzchak Luria, known as the Arizal, say that one is meant to use the right hand to close one’s eyes while reciting the first verse of the Shema. He connected this with an enigmatic riddle found in the Zohar.

The Zohar tells of an old man who appeared as a donkey driver met Rabbi Yossi during his travels and asked several questions. Rabbi Yossi failed to appreciate the true significance of the old man’s question.

However, his colleague Rabbi Chiya sensed that there was more to the questions than met the eye. After some reflection, they realised the old man was in fact teaching them deep mystical secrets.

The riddle that gave them the hardest time in understanding asked:

‘Who is the beautiful maiden without eyes, whose body is concealed and revealed, who comes out in the morning and disappears during the day, who is adorned with ornaments that never were?’

The Arizal offers an explanation that relates to the reading of the Shema. The ‘Maiden’ refers to the divine attribute of malchut (‘kingship’), sometimes referred to as the Shechinah, the feminine aspect of the divine. In this context, it is also referred to as ‘Rachel.’

There are four spiritual worlds in the kabbalistic formulation of the cosmos, and the world of Atzilut (‘Emanation’) is the highest of the four. In this realm, nothing has physical form or colour, and sight is non-existent.

The Kabbalists say that whoever recites the Shema is elevating the Mayin Nukvin (‘Feminine Waters’) to the world of Atzilut, setting the stage for the unification of the feminine and masculine, or the unification of the soul and the Shechinah. Since the Mayin Nukvin are entering Atzilut, a world that is higher than sight, the eyes must be closed during the first line of the Shema.

The right hand is used to do this, even when someone is left-handed. This is said to symbolise the attribute of chessed or kindness, as well as the Mayin Dechurin (‘Male Waters’), also connected to this riddle.

Have you ever noticed that when you are trying really hard to concentrate, you sometimes close your eyes to help you to focus?

Throughout the Talmud, the blind are called sagi nahor – ‘enough of light’ or ‘full of light.’ It is said this is so because one’s physical sight, which gazes out at the mundane and materialistic world, often contradicts and weakens one’s inner or spiritual sight.

Our physical senses often seem to contradict the idea of God’s oneness, that God is the only true reality. We see, smell, taste and feel the world around us, while God can remain an abstract and spiritual reality.

Therefore, when the Shema is said and the oneness of God is proclaimed, this becomes an affirmation that true reality is neither what the eye sees nor what is experienced naturally and intuitively. By covering the eyes when praying, a person indicated the desire to disconnect from the physical and connect to the spiritual.

It is said that when a person recites the Shema and accepts the yoke of heaven, the Shechinah or Divine Presence rests upon his/her face. The face is covered out of respect for the Divine Presence, for, as God told Moses: ‘See, there is a place by me where you shall stand on the rock; and while my glory passes by I will put you in a cleft of the rock, and I will cover you with my hand until I have passed by; then I will take away my hand, and you shall see my back; but my face shall not be seen’ (Exodus 33: 21-23, NRSVA).

The first verse of the Shema proclaims that ‘the Lord is our God; the Lord is one.’ This statement affirms belief that both God’s attribute of strength and judgment and God’s attribute of mercy are really one. Covering the eyes, symbolises acceptance that is seen with physical eyes as negative is, in truth, positive.