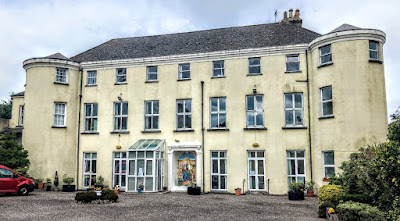 Is Youghal the first and the oldest university town in Ireland?

The college buildings and gardens beside Saint Mary’s Collegiate Church are reminders of the claim that Youghal was once home to Ireland’s earliest university. I visited the church, the college and the college gardens earlier this week as part of this summer’s extended ‘road trip.’

The first college in Youghal was founded in 1464 by Thomas Fitzgerald, 7th Earl of Desmond, as ‘Our Lady’s College of Youghal.’ It consisted of ‘a warden, eight ordained Fellows and eight lay brothers.’ It is said that ‘in addition to teaching, the Fellows served Saint Mary’s Church and seven other churches in the Barony of Imokilly.’

Despite this, a letter from Pope Innocent VIII in 1492 refers to the College in Youghal as the ‘University of the City of Youghal,’ undergirding local claims that persist that Youghal once had a university that long predated Trinity College Dublin or the short-lived university in Kilkenny.

During the Desmond rebellion, the college in Youghal, which stood separately from Saint Mary’s Collegiate Church, was ‘spoiled and well-nigh demolished’ in 1579.

The college buildings later came into the possession of Sir Walter Raleigh, who acquired them after the death of the previous owner, Sir Thomas Norris. They were bought by Richard Boyle, the 1st and ‘Great’ Earl of Cork, in 1602 for £1,500, and he rebuilt the college as his private residence ca 1605.

In 1641-1642, the ‘Great Earl’ added two large flanking towers to the house, built five circular turrets around the park, and cast up a platform of earth, on which he placed ordnance to command the town and harbour. He died at the College in 1643. 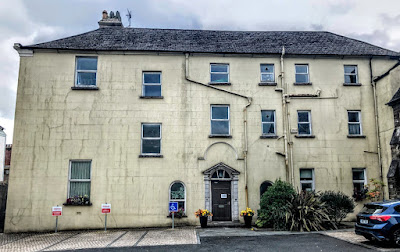 Boyle’s house had fallen into ruins by the mid-18th century, but it was largely rebuilt ca 1782. It incorporates the two flanking towers and retains interesting features from Boyle’s house, such as the rhythm of the windows and an elaborate mediaeval chimneypiece of the same character though not of such decorative workmanship as a similar chimneypiece in Myrtle Grove nearby.

This is a nine-bay, three-storey house. Apart from the earlier round-towers, the other features include a square-headed, tiled niche at the centre-bay with a Doric-style, shouldered surround an a dentillated entablature.

The round-headed opening at the back of the house has hood moulding and a carved limestone surround, with a pediment, Doric-style pilasters, entablature and spoked fanlight over the timber panelled door.

The Gothic revival north wing or extension was built in 1862 by DL Lewis and is an example of 19th century Gothic architecture, with finely carved details such as the gargoyle, lancets, trefoil motifs and the limestone heraldic plaque on the gable.

The architectural features here include sandstone chimneystacks, limestone cross finials and copings at the gable, snecked sandstone masonry walls with buttresses at the entrance and end-bays, carved hood mouldings and pointed arch openings.

The site in bounded to the west by the mediaeval town walls, while the Youghal College Gardens in front of the house embrace almost five acres and are protected as a national monument. The gardens can be clearly identified on the earliest maps of Youghal. The Pacata Hibernia map of Youghal (ca 1590) shows the lower garden as a series of geometric beds surrounded by paths.

Over 100 apple trees, prunes and quinces were imported from Bristol in 1616 for planting in the college gardens. This was the beginning of the walled orchard found in the gardens today.

As part of Boyle’s effort to strengthen the defences of Youghal during the 1641 Rebellion, five towers were built around the grounds, and two platforms of earth were constructed in the upper parts of the gardens to mount cannons on. They are part of Burke’s painting of Youghal, the earliest known landscape by an Irish artist.

In recent years, the college buildings served as a retirement home, and the college remained in private ownership until it was bought by the former Youghal Town Council in 2001.

Today, the buildings are part of an innovative enterprise centre, offering much-needed opportunities and space for start-up businesses in an attractive building in the historic Raleigh Quarter of the old town. The gardens are open to the public throughout the day. 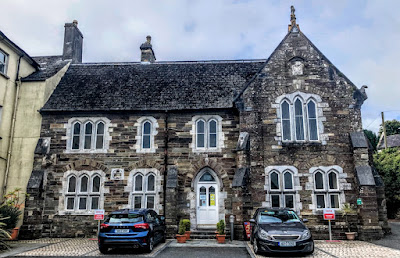