Praying in Ordinary Time 2021:
87, Our Lady and the English Martyrs, Cambridge 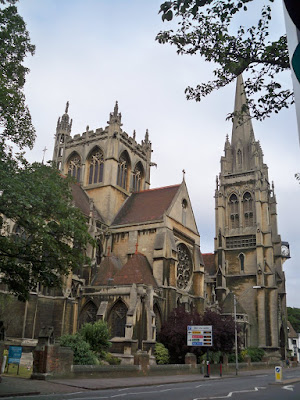 Our Lady and the English Martyrs, standing on a strategic corner in Cambridge (Photograph, Patrick Comerford)

Today is the Feast of Saint Bartholomew the Apostle. Before the day gets busy, I am taking a little time this morning for prayer, reflection and reading. Each morning in the time in the Church Calendar known as Ordinary Time, I am reflecting in these ways:

My theme this week is churches in Cambridge that are not college chapels. My photographs this morning (24 August 2021) are from the Roman Catholic Church of Our Lady and the English Martyrs. 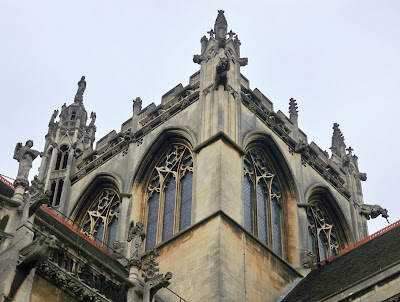 The church makes a strong dramatic statement of faith in a city with a strong Protestant tradition (Photograph, Patrick Comerford)

It is impossible not to notice the exuberantly massive Roman Catholic Church that stands guard on a prominent street corner on the way from the train station into the heart of Cambridge city centre.

This impressive – if not overpowering – castellated Gothic building is known locally as the Catholic church, or simply as ‘the Catholic,’ although local Cambridge Catholics often refer to it affectionately by its acronym, OLEM – Our Lady and the English Martyrs.

The first post-Reformation Roman Catholic church in Cambridge, Saint Andrew’s, was built by the architect of the Gothic revival, AWN Pugin, in 1842-1843, who also played an important role in the restoration, decoration and furnishing of the mediaeval fabric of the chapel of Jesus College between 1846 and 1849.

Eventually, Pugin’s church was dismantled, removed and rebuilt at Saint Ives, and replaced by OLEM, which was intended to make a strong, dramatic statement of faith in a city with a strong Protestant tradition. It was only in 1895 that the ban on Roman Catholics attending the university was lifted.

The new church cost a fortune, but it was all made possible by the wealth of Yolande Lyne-Stephens, a former ballerina at the Paris Opera and Drury Lane, who had married a very wealthy landowner.

Outside and inside, the church is a riot of detail and decoration: Gothic gargoyles, sleeping dogs, saints and angels, apostles and martyrs, all decorate and embellish the church in stone and in glass.

The best-known priest associated with the church, Monsignor Robert Hugh Benson (1871-1914), who had studied classics and theology at Trinity College, Cambridge, between 1890 and 1893. He was a curate there in 1905-1908 and found it all ‘a little too gorgeous and complete.’

Benson was a son of Archbishop Edward White Benson of Canterbury, who had ordained him priest in 1895. But after some time with the Community of the Resurrection, he became a zealous convert to Rome in 1903, was ordained a priest a year later and was then sent to Cambridge. His impact on Cambridge undergraduates was so great that leading Cambridge Anglicans tried to put pressure on his family to make him leave.

Perhaps that is why EM Forster, in The Longest Journey, says the Catholic church ‘watches over the apostate city, taller by many a yard than anything within, and asserting, however wildly, that here is eternity, stability, and bubbles unbreakable upon a windless sea.’ 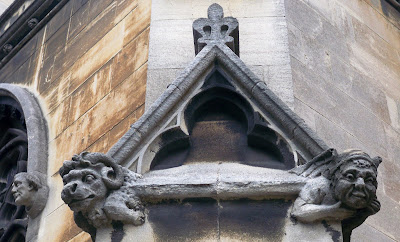 Benson found his church in Cambridge ‘a little too gorgeous and complete’ (Photograph: Patrick Comerford)

The Prayer in the USPG Prayer Diary today (24 August 2021, Saint Bartholomew the Apostle) invites us to pray:

Let us give thanks for the life and works of Saint Bartholomew. May we emulate his evangelism as we spread the Good News. 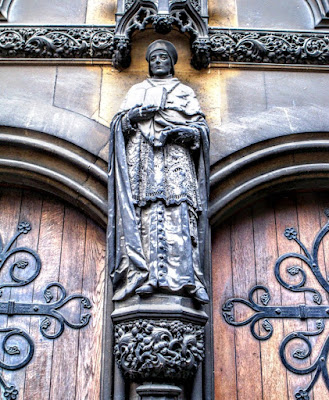 Cardinal John Fisher, canonised Chancellor of Cambridge … a figure at Our Lady and the English Martyrs (Photograph: Patrick Comerford)