The windows by Johnny Murphy and Reiltín Murphy in Saint Saviour’s Church, Limerick, depict the martyrdom of Bishop Terence Albert O’Brien and the history of Limerick (Photograph: Patrick Comerford, 2021; click on images for full-screen views)

I have visited Saint Saviour’s Church in Glentworth Street, Limerick, a few times in recent years.

This Dominican church is on the corner of Glentworth Street and Baker Place, facing the Tait Memorial Clock. It is a Gothic Revival church that has been altered and added to over the past two centuries, and brings together in one building the work of many important church architects in Ireland, including James Pain, James Joseph McCarthy, William Wallace, George Goldie, and Ashlin and Coleman.

However, in my admiration of the architecture of this church, I had missed out on some of the interior artistic treasures of this church, including some stained-glass windows that I had not seen, and the fresco on the chancel arch.

Poring over the sumptuous photographs and text of this book, I was prompted in two recent visits to Dublin to see the stained-glass windows in Saint Teresa’s Church, Clarendon Street, and the chapel in Terenure College, two Carmelite churches that feature in my morning prayer diaries on my blog next week. 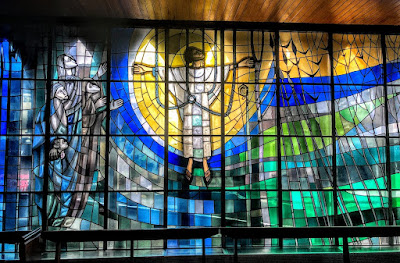 The martyrdom of Bishop Terence Albert O’Brien in the windows by Johnny Murphy and Reiltín Murphy (Photograph: Patrick Comerford, 2021; click on images for full-screen views)

And then, when I was in Limerick earlier this week, walking between buses from Dublin and to Askeaton, I returned to Saint Saviour’s Church to see the stained-glass windows in the oratory in the church that commemorates Bishop Terence Albert O’Brien of Emly.

Bishop O’Brien was a Dominican who was hanged in the Dominican abbey ruins in Limerick in 1651 for his resistance to the Cromwellian siege of Limerick. He had received the 17th century oak statue of ‘Our Lady of Limerick’, brought to Limerick from Flanders by Patrick Sarsfield in 1640, and the Sarsfield chalice from Patrick Sarsfield, and he was buried with them in the churchyard of Saint Mary’s Cathedral.

The two large, full-length windows on adjoining walls in the Bishop O’Brien Memorial Chapel in Saint Saviour’s were created by Johnny Murphy and Reiltín Murphy in 1982.

The window at the back of the chapel depicts: the martyrdom of Bishop Terence Albert O’Brien of Emly, watched by Sorrowing Women and Children.

The testimony of Bishop O’Brien and the subsequent history of Limerick in the windows by Johnny Murphy and Reiltín Murphy (Photograph: Patrick Comerford, 2021; click on images for full-screen views)

The second window continues with the symbol of the Limerick Dominicans and Bishop O’Brien’s final testimony in the first set of panels: ‘Preserve the Faith, keep the commandments, be resigned to the will of God. For this you will possess your souls. Do not weep for me, but pray that being firm and unbroken amidst the torment of death, I may happily finish my course.’

The history and life of Limerick continue in the following sets of panels. They show the Pikes of 1798 and burning homes; an emigrant ship and rosary beads; the Rising Sun of Easter; tractors and abundant harvests; the Shannon electrification scheme; planes over Foynes and Shannon; Ireland’s accession to the European Union, symbolised in the discreet initials EEC; and concluding with Pope John Paul II’s visit to Limerick on 1 October 1979. 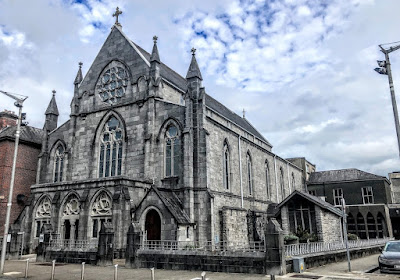 Saint Saviour’s Church brings together in one building the work of many important church architects in Ireland (Photograph: Patrick Comerford, 2021)

Johnny Murphy (1921-2006) was born in Cork and studied at the Crawford College of Art, Cork, and the National College of Art, Dublin, before spending time travelling and studying in Paris and Rome. He joined the Harry Clarke Studios around 1952, and in 1953 he married the painted Rosín Dowd from Belfast.

Johnny Murphy became a part-time lecturer in stained glass at the National College of Art in 1954, a position previously held by AE Child. Murphy and Des Devitt set up the Murphy-Devitt studios, and Johnny and Roisín Murphy were soon joined by their daughter, Reiltín Murphy.

The Murphy-Devitt studios closed in 1980, and the Murphy family moved to an old mill near New Ross, Co Wexford. Johnny Murphy, Roisín Dowd Murphy and Des Devitt all died in 2006. 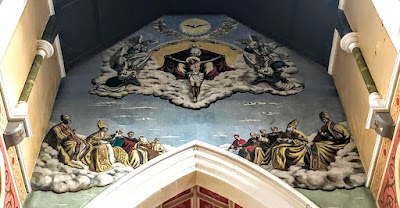 The fresco of ‘The Triumph of the Cross’ over the chancel arch was painted in 1951 by Father Aengus Buckley (Photograph: Patrick Comerford, 2021; click on images for full-screen views)

On my latest visit to Saint Saviour’s Church earlier this week, I also paid fresh attention to the fresco of ‘The Triumph of the Cross’ over the chancel arch, painted in 1951 by the Cork-born Dominican friar and artist, Father Aengus Buckley (1913-1978) of Limerick. 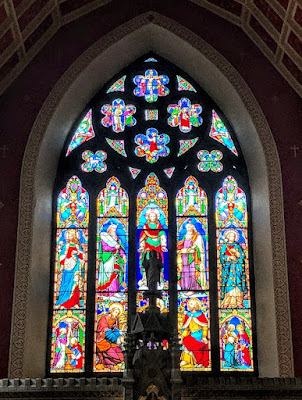 The East Window depicting the Transfiguration is by William Wailes of Newcastle, and dates from 1866 (Photograph: Patrick Comerford, 2021; click on images for full-screen views)