‘That we may lie down in peace,
and rise up to a new and nobler life’ 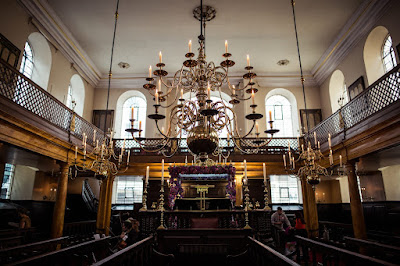 Bevis Marks Synagogue in London, the oldest synagogue in Britain in continuous use, has won the first round in a battle to block plans for two high-rise towers that would overshadow it.

The City of London Corporation Planning Committee met on Tuesday (5 October 2021) and rejected plans to build Bury House, a 48-storey office tower next to Bevis Mark, a Grade I listed 320-year-old synagogue. Councillors voted 14-7 to reject the planning application for the tower, which would be built on Bury Street.

A second planning application for a 21-storey, high-rise building on nearby Creechurch Lane is still being considered, however.

‘The special status of Bevis Marks has been recognised by the Planning Committee and common sense has prevailed,’ said Dame Helen Hyde, Chair of the Foundation for Jewish Heritage. ‘We hope the Committee will make the same decision with the second application which is equally unacceptable.’

The rejected proposal for Bury Street involved demolishing an existing building and building a new building with two basement levels, two mezzanines and a ground floor plus 48 upper storeys. It was planned for office use and flexible retail/cafe use, with ‘publicly accessible internal amenity space and community space,’ a new pedestrian route and a ‘new and improved public realm’ as well as ancillary basement ‘cycle parking, servicing and plant.’

At the meeting earlier this week, critics stressed that if the two planned high-rises were built, they – along with existing buildings – would block sunlight to the synagogue for all but around an hour a day, affecting religious observance and other synagogue functions. The proponents of the plan, however, claimed the effect would be minimal.

The committee received more than 1,800 comments about the Bury Street plan, most of them critical, stressing the national importance of the site and raising the concerns that the high-rise would dominate the space, cut the synagogue off from light and access, and possibly provoke structural damage.

A final decision will be made by the by the City of London’s assistant town clerk, after receiving the committee’s rejection recommendation.

The Save Bevis Marks website raised awareness of both high-rise projects and marshalled protests against them, stating: ‘High-rise office buildings would never be considered 4m away from Saint Paul’s Cathedral — so why should it be acceptable here?’

Prominent public figures, including the historian Sir Simon Schama, gave their support to the campaign to save Bevis Marks.

Bevis Marks was built in 1701 and is administered by the Spanish and Portuguese Sephardi Community. At present, it is undergoing renovation and development work aimed to expand and improve visitor experience.

Bevis Marks received a grant of almost £2.8 million from the National Heritage Lottery Fund in 2019 for ‘vital restoration work and conservation for its collections’ so that they can be displayed in a new section of the synagogue complex. It received £497,000 from the Heritage Lottery Fund in February (2021) to kick-start the renovation and other work that had been hampered over the previous year by the Covid-19 pandemic.

The work is begin overseen by the Bevis Marks Synagogue Heritage Foundation, which was established in 2019 with Prince Charles as its patron.

In my Friday evening meditations this evening, I am reflecting on a prayer for a Sabbath Eve Service, written by Rabbi John Rayner and Rabbi Chaim Stern for Service of the Heart:

‘As we look back on the past week, an awareness of failure oppresses us. Cares and anxieties have caused us to forget you, O God; indifference and self-seeking have made us neglect our duties to our fellow men. May this hour of worship recall us to our obligation, and help us to rededicate our lives to your service.

‘Turn us from indifference selfishness, O God; let our constant care be to help one another; and give us a quiet spirit, freed from the voices within whose clamour deafens us to our neighbour’s cry.

‘When we return to our homes, may the tranquillity which reigns in this sanctuary abide with us, that we may lie down in peace, and rise up to a new and nobler life.’ 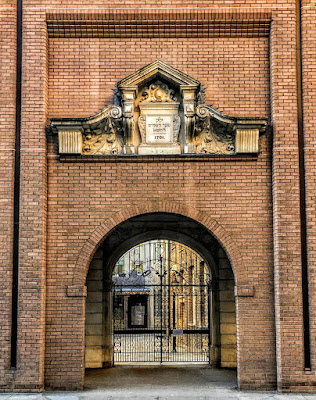 Bevis Marks Synagogue is the oldest synagogue in Britain in continuous use (Photograph: Patrick Comerford)