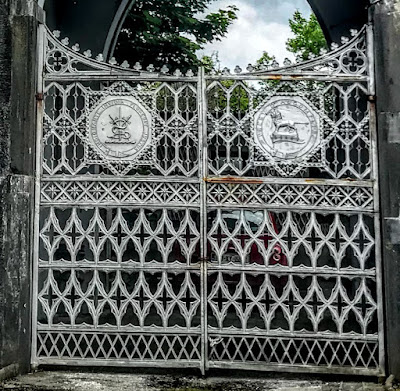 The gate at Ardfert Abbey showing the family crests of the Talbots and the Crosbies … a photograph on p 145 in Chris Keane’s new book (Photograph: Patrick Comerford)

During my book-buying visit to Limerick earlier this week, one of the new books I bought is The Crosbies of Cork, Kerry, Laois and Leinster by Michael Christopher Keane, partly because the author has used two of my photographs to illustrate his book, and partly because this is a fascinating story for anyone interested in genealogy, family history and local history.

Chris Keane is from Tarbert, Co Kerry, and is a retired lecturer in University College Cork. He now lives in Farran, Ovens, Co Cork. This is his third book and has the inviting subtitle: ‘Bards, Imposters, Landlords, Politicians, Aeronauts, Newspapers’. It tells the story of a colourful family that achieved both fame and notoriety through the centuries.

The story begins with the MacCrossans, who were the hereditary bards and poets to Laois’s leading sept, the O’Moores of the Rock of Dunamase, and to the O’Connors of Offaly from ancient times. When Laois and Offaly were planted and renamed Queen’s County and King’s County in the 16th century, two young MacCrossan brothers from the Ballyfin and Clonenagh area, between Mountrath and Portlaoise, were fostered by Francis Cosby of Stradbally Hall, who moved to Ireland in 1546, and the neighbouring Bowen family.

The brothers tried to disguise their Gaelic Irish origins, changed their names to Patrick and John Crosbie and claimed to be descended from mid-ranking English gentry, the Crosbies of Great Crosbie, Lancashire. These changes are described by Chris Keane as a ‘deceit’ and he concludes they were ‘imposters within their own community.’ But the changes helped to advance the standing of the brothers in Elizabethan and Jacobean society. Patrick becoming a leading landlord in both Laois and Kerry, while his brother, John Crosbie, becoming the Church of Ireland Bishop of Ardfert (1601-1620).

Surprisingly, most of Bishop John Crosbie’s children were brought up as Roman Catholics. His descendants became major landlords in Co Kerry for the following three centuries. Their principal residence was Ardfert Abbey and the family accumulated an array of titles and peerages, including baronet (1630), Baron Brandon (1758), Viscount Crosbie of Ardfert (1771) and Earl of Glandore (1776).

When John Crosbie (1753-1815), 2nd Earl of Glandore, died in 1818, there as no immediate male heir to inherit his titles and estates. The Brandon title passed to his cousin, the Revd William Crosbie, Rector of Castleisland. When Lord Brandon realised his wife Elizabeth (La Touche) was having an affair with the Prime Minister, Lord Melbourne, even before the death of Melbourne’s wife, Lady Caroline Lamb, he first tried to blackmail Melbourne into making him a bishop, and then sued unsuccessfully for ‘criminal conversation.’ 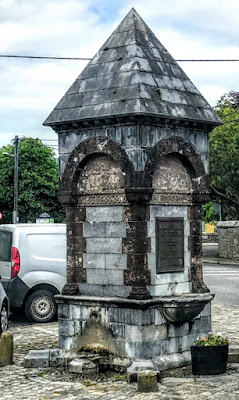 Meanwhile, Lord Glandore’s sister, Lady Anne Crosbie, had married John Talbot of Mount Talbot Co Roscommon, and the Ardfert estate passed to their son, the Revd John Talbot-Crosbie, who changed his name to Talbot-Crosbie. He married Jane Lloyd of Beechmount House, Rathkeale, Co Limerick, and they were the ancestors of the Talbot-Crosbie family of Ardfert Abbey.

Patrick Crosbie is best remembered for transplanting substantial numbers of the ‘Seven Septs of Laois’ to his large estate in Co Kerry, with many of these families settling in the Tarbert area, now within the Rathkeale and Kilnaughtin Group of Parishes. Before his death in 1610, he failed in his attempt to grab the estates of the FitzMaurice family of Lixnaw, Co Kerry, and of the FitzGerald family of Glin Castle, Co Limerick.

Sir Pierce Crosbie was both Cupholder and Gentleman of the King’s Bedchamber to two successive monarchs, King James I and King Charles I. He lost his estates and was jailed due to his implacable opposition to the Irish Lord Deputy Wentworth, only to regain them when Wentworth was executed for treason.

He was also closely associated with what is arguably the most notorious sex scandal in British history in which his stepson, the Earl of Castlehaven, was executed for sexual depravity. His remarkable career ended in supporting the Irish Catholic Confederacy in the 1640s.

The Laois Crosbies lost their estates, including Crosbie castle in Ballyfin, when they found themselves on the losing side in the Cromwellian wars. However, this branch of the family later re-established itself at Crosbie Park, near Baltinglass, Co Wicklow and in Co Carlow. A later generation acquired fame in their own different ways. Richard Crosbie of Wicklow, who became popularly known as ‘Mr Balloon,’ achieved fame as Ireland’s first aeronaut with his pioneering hot-air balloon flight in 1785. His brother, Sir Edward Crosbie, the fifth baronet, was executed as a suspected rebel leader in Carlow in the 1798 rebellion, and was denied a Christian burial.

Yet another well-known branch of the extended family includes the Cork Crosbies of the Examiner newspapers. These Crosbies originated with a young journalist Thomas Crosbie who left his home in Co Kerry to build a newspaper dynasty that extended over five generations from the mid-1800s until finally taken over by The Irish Times in 2017.

The stories of the Crosbies provide intriguing insights into the complex allegiances of a prominent Irish family through the centuries to the present time. 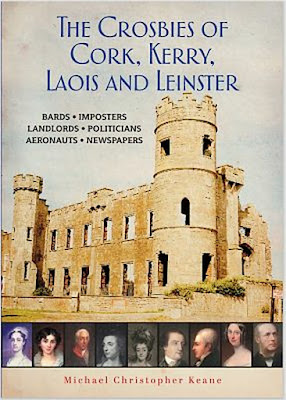