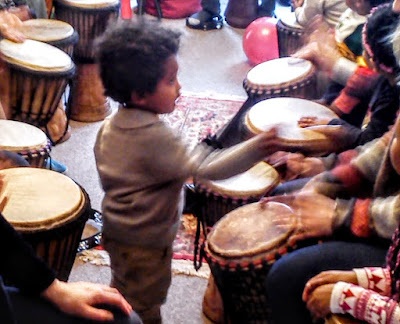 A drum playing workshop for children … ‘The Little Drummer Boy’in a song written 80 years ago in 1941 (Photograph: Patrick Comerford)

We have arrived at the Advent this morning, and our Christmas celebrations begin this evening. I am celebrating the first Eucharist of Christmas this evening (24 December 2021) in Saint Brendan’s Church, Tarbert, Co Kerry, at 6 p.m. and in Castleton Church, Pallaskenry, Co Limerick, at 8 p.m.

Christmas Eve is going to be yet another busy day in a busy week. But, before this day begins, I am taking some time early this morning for prayer, reflection and reading.

Each morning in my ‘Advent Calendar’ this year, I have been reflecting in these ways:

This year’s ‘Advent Calendar’ this year comes to an end this morning [24 December]. Of course, there are no major saints in the principal calendars of the Church today, so I thought I would look at the story of ‘The Little Drummer Boy’.

In the current edition of the Church Times (17/24 December 2021), Bishop Gregory Cameron of St Asaph continues his Advent series with a reflection on the stories associated with ‘The Little Drummer Boy’.

Of course, as he points out, there is no mention of this little boy in either of the two Gospel nativity narratives, Saint Matthew and Saint Luke. Yet, while this particular character is a newcomer to Christmas traditions, music already appears in the Nativity story with the song of the angels.

The story goes that the Little Drummer Boy was left behind by the Magi when ‘they left for their own country by another road’ (see Matthew 2: 12). He first appears 80 years ago, in a song written in 1941 by an American songwriter, Katherine Kennicott Davis.

The song draws on an old Czech story. After the Wise Men had visited, it recounts, they left their gifts and departed. Only then do the Virgin Mary and Saint Joseph become aware of a small figure crying in the stable corner. He is the little drummer boy, part of the entourage, who has been left behind.

The Virgin Mary invites the boy to play for the Infant Jesus, who then rewards him with a smile.

Her song was made popular when it was recorded in 1951 by the Trapp Family Singers – who were later popularised in the film The Sound of Music. For many years after, the song featured in different versions at the top of the Christmas charts, and today ‘The Little Drummer Boy’ is part of the list of favourite Christmas carols.

Bishop Gregory Cameron admits that ‘for some,’ the story of the Little Drummer Boy ‘may be pure schmaltz. For others, the most humble of gifts sincerely given are part of what makes Christmas truly Christmas.’ 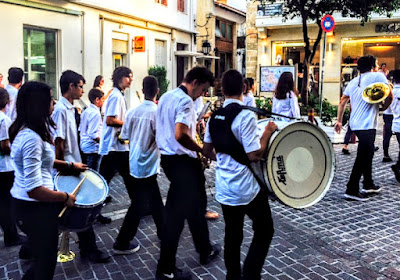 ‘Shall I play for you, pa rum pum pum pum, On my drum?’ … drums in a parade in Rethymnon in Crete (Photograph: Patrick Comerford)

67 Then his father Zechariah was filled with the Holy Spirit and spoke this prophecy:
68 ‘Blessed be the Lord God of Israel,
for he has looked favourably on his people and redeemed them.
69 He has raised up a mighty saviour for us
in the house of his servant David,
70 as he spoke through the mouth of his holy prophets from of old,
71 that we would be saved from our enemies and from the hand of all who hate us.
72 Thus he has shown the mercy promised to our ancestors,
and has remembered his holy covenant,
73 the oath that he swore to our ancestor Abraham,
to grant us 74 that we, being rescued from the hands of our enemies,
might serve him without fear, 75 in holiness and righteousness
before him all our days.
76 And you, child, will be called the prophet of the Most High;
for you will go before the Lord to prepare his ways,
77 to give knowledge of salvation to his people
by the forgiveness of their sins.
78 By the tender mercy of our God,
the dawn from on high will break upon us,
79 to give light to those who sit in darkness and in the shadow of death,
to guide our feet into the way of peace.’

The Prayer in the USPG Prayer Diary today (24 December 2021) invites us to pray:

Let us pray for the Church of the Province of Central Africa, comprised of dioceses across Botswana, Malawi, Zambia and Zimbabwe. 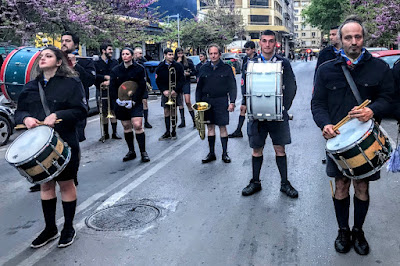 ‘I played my drum for Him, pa rum pum pum pum played my best for Him’ … lining up for a religious parade in Thessaloniki (Photograph: Patrick Comerford)