Bloomsday arrives early
in Dublin to celebrate
the centenary of Ulysses 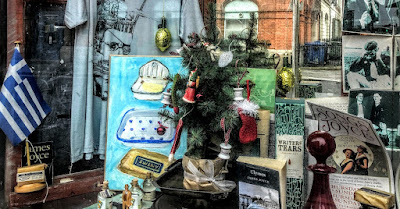 Bloomsday has come early to Dublin this year. Today marks the 100th anniversary of the publication of James Joyce’s Ulysses on 2 February 1922, and a plethora of Joycean activity around Dublin throughout this year.

Ulysses was first published 100 years ago, on 2 February 1922, by Sylvia Beach in her small bookshop in Paris, Shakespeare and Company. The book consumed seven years of Joyce’s life, and has transformed our culture and literary world.

Joyce celebrated his 40th birthday on the same day that Ulysses was published. In that same year, 1922, Ireland was grappling with its new independent status in the world. It is hard to imagine today that Ulysses was banned in the US and Britain until the 1930s, and that until Joyce died in 1941 he was out of favour with the Irish establishment. But no modern novel rivals Ulysses in its reach, and it has become the most influential pieces of modernist literature.

In my own personal celebration of this centenary, I visited a number of Joycean sites in Dublin yesterday (1 February 2022) during an extended walking tour between a dental appointment in the late morning and a consultation in mid-afternoon.

The Bailey on Duke Street once displayed the front door of 7 Eccles Street, where, according to Ulysses, Molly and Leopold Bloom lived on Bloomsday in 1904. When the Bailey was acquired by Marks and Spencer in 1993, the door was presented to the James Joyce Centre on North Great George’s Street.

Another plaque on the Bailey celebrated John Ryan (1926-1992), the ‘artist, writer, Joycean and benefactor’ who was the owner of the Bailey in 1956-1971, and who organised the first ‘Bloomsday’ celebrations in Dublin in 1954.

And, of course, on bus journeys in and out of the city centre, I passed the houses on Clanbrassil Street where Leopold Bloom may have been born, and where his neighbours, the Comerfords, lived when Molly Bloom was caught short after one of their parties. Joyce says Bloom was born at 52 Clanbrassil Street, two doors down from a Comerford family home. 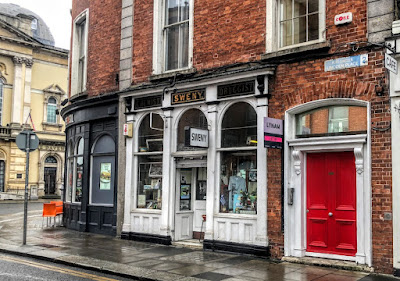 RTÉ is marking the 100th anniversary with an extensive and ambitious programme of themed content across television, radio and online.

Tomorrow night’s 100 Years of Ulysses promises an enlightening journey into the heart of one of the most inspiring and influential novels and reveals how it remains relevant today.

RTÉ One is devoting a special edition of Nationwide to Ulysses this evening (7 pm, 2 February). Anne Cassin views the first ever printed copy of Ulysses with Katherine McSharry at the Museum of Literature Ireland. She meets Booker Prize-winning author Anne Enright, who shares her thoughts on Ulysses. She visits the Joyce Tower in Sandycove to meet with one of the early curators, Vivien Igoe. And she returns to Studio 9 in RTÉ with actor Patrick Dawson to hear about the marathon 30-hour radio dramatisation that was broadcast in 1982.

The feature ‘Book on One’ during Late Date on RTÉ Radio 1 each evening this week at 11.20 pm highlights the worldwide significance and influence of Ulysses on other writers.

A special edition of Arena on RTÉ Radio 1 this evening (7 pm, 2 February) is dedicated to Ulysses and the contributors include Colm Toibín, Nuala O'Connor, Mary Costello, John Patrick McHugh and Catherine Flynn.

Other contributions from RTÉ include Finnegans Wake – Suite of Affections, a new work by composer Roger Doyle; readings of excerpts from Ulysses and other works by Joyce; and ‘James Joyce’s Chamber Music: The Lost Song Settings and the Story of an Intriguing Collaboration.’

Nora, a novel by Nuala O’Connor, reimagines the fascinating love story of Nora Barnacle and James Joyce and has been chosen as the ‘One Dublin One Book’ choice for 2022.

An Post has launched two new postage stamps to celebrate this centenary. The Ulysses 100 stamps are the work by Amsterdam-based Irish designers, The Stone Twins, and consist of 18 sections, signifying the number of chapters in the book. The stamp design features photographs by the photographer JJ Clarke, who took vivid images of daily life in Dublin when he was a medical student in the city between 1897 and 1904.

Ulysses Journey 2022 is an international programme of music, film and talks to mark this centenary. It began yesterday (1 February 2022) and continues until 18 June 18, and is a collaboration between Contemporary Music Centre, Ireland (CMC) and Centre Culturel Irlandais (CCI).

To celebrate the centenary, six specially commissioned films are being screened in Dublin, Belfast, Paris and Budapest. Other programmes include an international concert series of new and existing works by Irish and Hungarian composers, which is appropriate given Leopold Bloom’s supposed Hungarian origins. 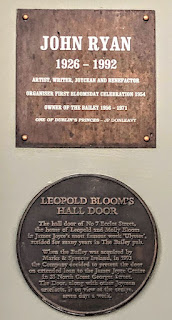