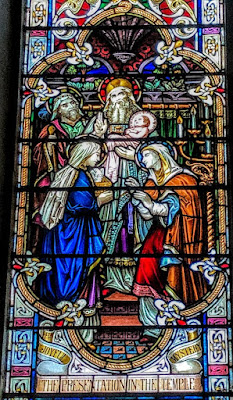 ‘The Presentation in the Temple’ … a window by James Watson in the Church of the Holy Rosary, Murroe, Co Limerick (Photograph: Patrick Comerford)

Today looks like being a busy day. Although I am still in Dublin after a dental appointment and another consultation yesterday, I have a lot to catch up on. But, before this busy day begins, I am taking some time early this morning for prayer, reflection and reading.

1, Reflections on a saint remembered in the calendars of the Church during the Season of Christmas, which continues until Candlemas or the Feast of the Presentation today (2 February);

Today (2 February 2022) is the Feast of the Presentation, the closing great feast of the Christmas season, and this morning I am reflecting on Simeon and Anna, who are two key figures – and not marginal figures – in this story, which is unique to Saint Luke’s Gospel. 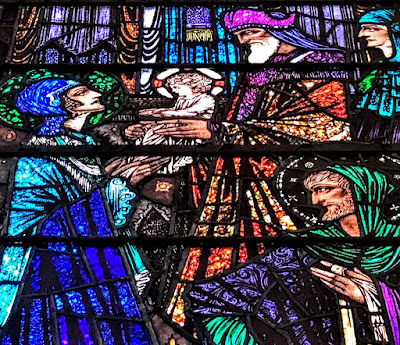 According to one Orthodox tradition, Simeon was one of the 72 translators of the Septuagint. As he hesitates on the translation of Isaiah 7: 14 (LXX: ‘Behold, a virgin shall conceive’) and contemplates correction to γυνή (‘woman;), an angel appears to him and tells him that he is not going to die until he has seen the Christ born of a virgin. This makes him well over 200 years old at the time of the meeting described by Saint Luke, and miraculously long-lived.

Simeon and Anna have been ‘waiting for consolation’ (Luke 2: 25). Simeon is righteous and devout. Luke assigns Anna a place among the prophets (v. 36). Both are very old: Simeon knows he is near the end of days; Anna is 84, well beyond the life expectancy of the time. They are reaching the end of their days when they recognise the Christ Child is in their presence in the Temple.

Saint Luke introduces Simeon with a word (προσδεχόμενος, prosdechomenos) that is normally translated as ‘waiting’ (see Mark 15: 43; Luke 12: 36, 15: 2, 23: 51). But it could also be rendered as ‘ready to receive to oneself.’ The term expresses an eagerness to welcome. In other words, Simeon’s waiting is not so much endurance as active anticipation; he has been counting the days until God reveals what he has promised to him personally.

As Simeon gazes into eyes of the Christ Child, he knows ‘God is with us,’ that ‘God with me.’

The result of Simeon’s listening is one of the most tender moments in Scripture: Simeon enters the Temple to find the Virgin Mary and Saint Joseph with their new-born child. He has the distinction of being the only person in the Bible who we is explicitly told held the Christ Child in his arms, and in almost Eucharistic-like movement, he takes the body of Christ in his hands. Any inner disquiet is calmed by Christ, and his soul is at rest.

Anna too has been in God’s presence for decades. She is a member of the tribe of Asher, and she turns her grief as a young widow into a life of prayer, waiting on the Lord day-by-day. For her, the sheer existence of the Christ Child is the only evidence she needs to recognise God’s redemptive work. A baby who cannot even walk becomes the focal point of her praise.

Anna makes a point of talking about Christ to all who were waiting for redemption. Again, Saint Luke returns to the word prosdechomenos. The countless crowds Anna tells about Jesus are marked by that same readiness to receive. As in the feeding of the 5,000, the gospel always multiplies itself to fill the hungry crowds with more left to spare. God’s comfort is intended to reach ever outward.

Anna did not wait for Christ’s life to unfold, still less for his Passion, Death and Resurrection, to spread the word.

Simeon’s body is said to have been moved between the years 565 and 578 from Syria or Jerusalem to Constantinople. Sometime around the Siege of Constantinople in 1203, the relics were seized and shipped to Venice, but ended up in the port of Zadar on the Dalmatian coast, where his feast day is celebrated on 8 October. In October 2010, Archbishop Želimir Puljić of Zadar sent a small silver reliquary containing some of Simeon’s relics to Archbishop Theofylactus of Jordan, representing Patriarch Theophilos III of Jerusalem, for the monastery of Saint Simeon the Godbearer in Jerusalem. The Chiesa di San Simeon Grande in Venice also claims to have his relics.

The Presentation in the Temple, carved on a panel on a triptych in the Lady Chapel, Lichfield Cathedral (Photograph: Patrick Comerford/Lichfield Gazette)

29 ‘Master, now you are dismissing your servant in peace, according to your word;
30 for my eyes have seen your salvation,
31 which you have prepared in the presence of all peoples,
32 a light for revelation to the Gentiles
and for glory to your people Israel.’

The Prayer in the USPG Prayer Diary today (2 February 2022) invites us to pray:

Radiant God, we thank you for bringing light into the world through Jesus. May we be redeemed by you. 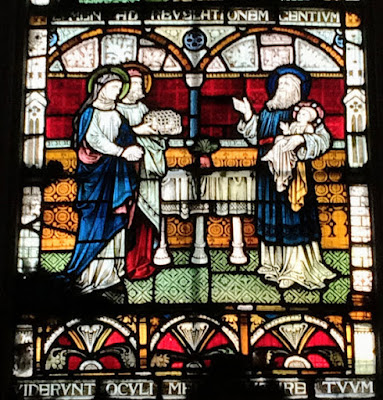