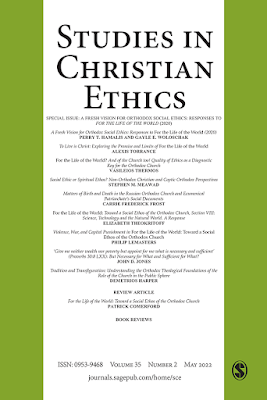 I have been invited to contribute a feature-length book review that amounts to a full paper in the current edition of Studies in Christian Ethics.

This is the leading, peer-reviewed English-language academic journal devoted exclusively to theological questions arising in the field of Christian ethics and moral theology.

The journal is published in conjunction with the Society for the Study of Christian Ethics based in the UK, whose annual conference furnishes the themed material for the first issue of each volume.

By publishing contributions from international scholars and influential theologians and philosophers, the journal seeks to strengthen debate and to foster research on the wide range of topics that emerge in this fast-growing field.

The latest edition is a special issue, with a collection of papers by mainly Orthodox theologians assembled by the guest editors of this special edition, Perry Hamalis and Gayle Woloschak, and devoted to For the Life of the World: Toward a Social Ethos of the Orthodox Church. This document, issued in 2020 by the Ecumenical Patriarchate on the social ethos of the Orthodox Church, provides guidance for catechesis and ample material for moral, doctrinal and scriptural debate.

The editors say the ‘breadth and seriousness of reflection manifest in these papers will surely inspire the most searching scholarship and dialogue both within and beyond the Orthodox communion.’

The papers in the latest edition may have an added poignancy created by the tensions between the Russian Orthodox Church and the Ecumenical Patriarchate, worked out in some of the current divisions in Orthodoxy in Ukraine.

I have been invited to contribute the major book review in the current edition of Studies in Christian Ethics, reviewing the published edition of this ground-breaking document: David Bentley Hart and John Chryssavgis (eds), For the Life of the World: Toward a Social Ethos of the Orthodox Church.

This special issue of Studies in Christian Ethics is published with the theme, ‘A Fresh Vision for Orthodox Social Ethics: Responses to For the Life of the World.’ The topics are introduced by Perry T Hamalis of North Central College, Department of Philosophy and Religious Studies, Naperville, llinois; and Gayle E Woloschak of Northwestern University Feinberg School of Medicine, Department of Radiation Oncology, Chicago.

The Editor of Studies in Christian Ethics, Dr Susan Frank Parsons, is Director of Pastoral Studies at the Margaret Beaufort Institute of Theology in Cambridge. The Reviews Editor is Kevin Hargaden of the Jesuit Centre for Faith and Justice, Dublin, who commissioned my paper.

Studies in Christian Ethics is regarded as the leading English-language journal in theological ethics in Europe. It offers first-rate work by British theologians and ethicists, but also showcases the best in North American and Continental scholarship in the field.

This is a high impact journal that has published cutting edge research papers by leaders in the field on both sides of the Atlantic, since its founding in 1988, making it the premier journal of theological ethics in the English-speaking world.

This is only one of two English-language journals in religious ethics. ‘The coverage of its book reviews is unequalled, making it essential for keeping one’s finger on the pulse of the field,’ according to Nigel Biggar, Regius Professor of Moral and Pastoral Theology at Christ Church Oxford.