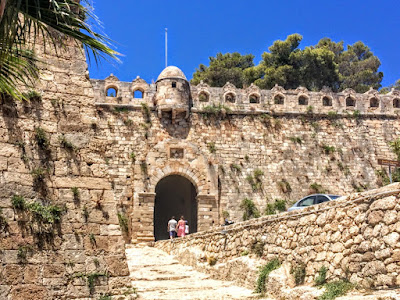 The Fortezza in Rethymnon in Crete … Psalm 46 inspired Luther’s hymn ‘A Mighty Fortress Is Our God’ (Photograph: Patrick Comerford)

i am stil in hospital in Milton Keynes this weekend after suffering a stroke a week ago. These days have provided additional time for thinking, and before this day begins I am taking some time early this morning (26 March 2022) for prayer, reflection and reading.

Psalm 46 is known for its opening words in the English of the King James Version, ‘God is our refuge and strength, a very present help in trouble,’ and known by its opening words in Latin, Deus noster refugium et virtus. It is also known as ‘Luther’s Psalm’ and has settings by Bach, Mozart and Pachabel.

Psalm 46 praises God for being a source of power and salvation in times of trouble. In the slightly different numbering in the Greek Septuagint and Latin Vulgate, this is Psalm 45.

This psalm is attributed to the sons of Korah, and the superscript reads: ‘To the leader. Of the Korahites. According to Alamoth. A Song.

The description in the superscript or verse 1 in the Hebrew version, calling for the psalm to be played on alamot (Hebrew, עלמות), could denote either a high-pitched musical instrument or the soprano voices of young girls who went out to dance in celebration of David’s victory over the Philistines. The Jerusalem Bible renders the word alamotas an oboe. The Midrash Tehillim, however, says the word alamot refers to the ‘hidden things’ that God does for his people.

Some commentators suggest this psalm may have been composed after David defeated the enemies of ancient Israel from surrounding lands. The text is divided into three sections, each ending with a Selah, after verses 3, 7 and 11 in the NRSVA (verses 4, 8 and 12 in the Hebrew verse numbering).

Scholars differ as to which river the psalm refers to in verse 4, the ‘river whose streams make glad the city of God, the holy habitation of the Most High.’ The Jordan is 32 km north-east of Jerusalem, assuming that the ‘city of God’ is a reference to Jerusalem. But Ezekiel describes a river the will run from beneath the Temple in Jerusalem eastward to the Dead Sea (see Ezekiel 47).

The reference in verse 5 to ‘when the morning dawns’ has been read by one commentator as an allusion to to Abraham, who would rise at daybreak to pray to God.

Verse 10 reads: ‘Be still, and know that I am God! I am exalted among the nations, I am exalted in the earth.’ This verse is further developed in Psalm 47, which opens an address to all the nations with the words ‘Clap your hands, all you peoples; shout to God with loud songs of joy’ (Psalm 47: 1).

Portions of Psalm 46 are used or referenced in several Jewish prayers, and verse 12 in the Hebrew numbering is part of the Havdalah ceremony, marking the end of Shabbat and ushering in the new week. This psalm is recited as a prayer for the end of all wars.

Psalm 46 is also known as ‘Luther’s Psalm’, as Martin Luther wrote his popular hymn ‘Ein feste Burg ist unser Gott’ (‘A Mighty Fortress Is Our God’), based on Psalm 46. Luther's hymn was called ‘the Marseillaise of the Reformation.’ has been quoted in many musical works, both religious and secular.

In the 17th century, Johann Pachelbel composed a motet setting of Psalm 46, Gott ist unser Zuversicht und Stärke, and Michel-Richard Delalande based a grand motet on the psalm. Marc-Antoine Charpentier used Psalm 46 for Deus noster refugium (H. 218), written for soloists, chorus, two treble instruments and continuo. As a child Mozart wrote a short motet to the text of the first verse as a gift to the British Museum and as an homage to 16th century English composers such as Thomas Tallis.

For several decades, some theorists have suggested that William Shakespeare placed his mark on the version of Psalm 46 that appears in the Authorised ot King James Version, although most scholars view this as unlikely.

According to this theory, Shakespeare was 46 years old in 1611 when the Authorised Version was completed. Shakespeare’s signature has a few variants, and on at least one occasion he signed himself ‘Shakspeare’, which divides into four and six letters, ‘46’. The 46th word from the beginning of Psalm 46 is ‘shake’ and the 46th word from the end (omitting the liturgical mark ‘Selah’) is ‘spear’ (‘speare’ in the original spelling).

Decorative spice-boxes in the Jewish Museum in Bratislava … portions of Psalm 46 are part of the Havdalah ceremony (Photograph: Patrick Comerford)

To the leader. Of the Korahites. According to Alamoth. A Song.

4 There is a river whose streams make glad the city of God,
the holy habitation of the Most High.
5 God is in the midst of the city; it shall not be moved;
God will help it when the morning dawns.
6 The nations are in an uproar, the kingdoms totter;
he utters his voice, the earth melts.
7 The Lord of hosts is with us;
the God of Jacob is our refuge.
Selah

8 Come, behold the works of the Lord;
see what desolations he has brought on the earth.
9 He makes wars cease to the end of the earth;
he breaks the bow, and shatters the spear;
he burns the shields with fire.
10 ‘Be still, and know that I am God!
I am exalted among the nations,
I am exalted in the earth.’
11 The Lord of hosts is with us;
the God of Jacob is our refuge.
Selah

Let us pray with Michol Thompson, a 14-year-old from Jamaica, as he remembers all Black people who were taken from their homes and forced to work for strangers.

Shakespeare’s memorial in Southwark Cathedral … did Shakespeare leave his mark on Psalm 46 in the Authorised Version? (Photograph: Patrick Comerford)