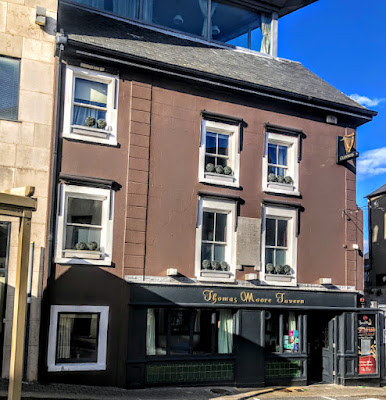 The Thomas Moore Tavern on Cornmarket, Wexford … the home of Thomas Moore’s mother, Anastasia Codd, until weeks before the poet was born (Photograph: Patrick Comerford, 2022)

Who has the greatest claim to Tom Moore: Wexford or Dublin? Or even Co Kerry?

Sometimes, the ‘Meeting of the Waters’ in Avoca seems to claim Tom Moore all to himself, although he has no family connections with Co Wicklow.

After recent visits to Moore’s ancestral home in Wexford, his birthplace on Aungier Street in Dublin, and the Moore family graves in the ruins of Saint Kevin’s Church on Camden Row, Dublin, I am still wondering whether Wexford or Dublin – or even some unknown place in Co Kerry – has the first and foremost claim on the great poet and songwriter.

Of course, Thomas Moore was born in Dublin on 28 May 1779, but he had no Dublin ancestry. His father, John Moore (1741-1825), was from Co Kerry, but there is no record of where in Co Kerry; his mother Anastasia Codd was from Cornmarket in Wexford Town, and she only moved to Dublin weeks before her son’s birth.

The bard’s father was born in Co Kerry, but where was he from?

A report in the Kerry People in 1904 recalled how Moore visited Ardfert in 1823, travelling in a party that included the Marquis and Marchioness of Lansdowne. Young and old flocked to see them when they arrived in Ardfert.

Michael Pierce, a local classical teacher in Ardfert, was the guide for the party. They visited Ardfert Cathedral and the graveyard, and also visited the ruined Franciscan Abbey.

The group travelled to Lixnaw and Listowel on the following day, when it was said Moore’s father was from the neighbourhood of Listowel, ‘where a few descendants of the family still reside.’ In Listowel, Moore was met his first cousin, Garrett Moore, a well-to-do farmer who introduced his three sons.

When the Listowel writer Bryan MacMahon (1909-1998) delivered a lecture delivered in 1952 to mark the centenary of Moore’s death, he claimed that Moore’s father came from Newtown Sandes, or Moyvane, and this detail has been narrowed down in more recent times to the townland of Cloonbrane – although it is open to debate whether Cloonbrane might be described as ‘the neighbourhood of Listowel.’ 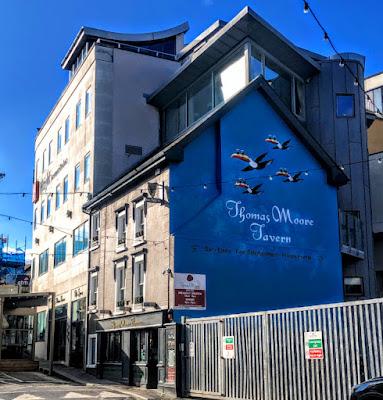 The Thomas Moore Tavern and still claims to be one of Wexford’s oldest bar (Photograph: Patrick Comerford, 2022)

But, while the poet knew little about his paternal ancestors, we can be more certain of his maternal links with Wexford and his family connections with the town.

His father John Moore married the considerably younger Wexford-born Anastasia Codd in 1778. She was the daughter of Thomas Codd, known as ‘Honest Tom Codd,’ of Cornmarket, Wexford. Thomas Codd lived in a three-storey house in Cornmarket in the centre of Wexford. From there he ran a grocery and spirits business. His future grandson Thomas Moore would refer to his grandfather as ‘my gouty old grandfather Tom Codd,’ and Anastasia Jane Codd was born in this house in 1764.

However, we know little about how John Moore met Anastasia, who was 23 years his junior. They married and lived above the shop in Cornmarket for some time before moving in 1779 to then fashionable Aungier Street in Dublin.

In Dublin, John Moore opened a grocery shop of his own on the ground floor in Aungier Street and he was also a barrack master in Islandbridge.

Thomas Moore, who was named after his Wexford grandfather, was born above the shop in Aungier Street in 1779, just weeks after his parents moved from Wexford to Dublin. This means Anastasia was only 15 when Thomas was born and John was 38. 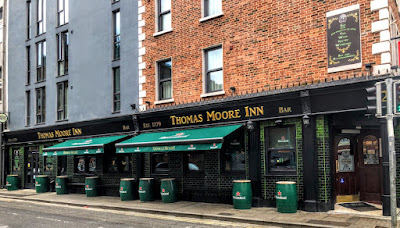 Thomas Moore studied at Trinity College Dublin, where he was a friend of Robert Emmet. He graduated in 1799 and moved to London to study law.

A prolific writer, poet, singer and balladeer, Moore set his poems to ancient Irish melodies. They later became known collectively as ‘Moore’s Melodies’. His works were hugely popular in Britain and Ireland and across Europe and America. They included ‘The Minstrel Boy,’ ‘The Last Rose of Summer,’ ‘The Harp That Once Through Tara’s Halls,’ ‘The Meeting of the Waters’ and ‘Oft in the Stilly Night.’ He became a close friend of the poets Byron and Shelley and .had many friends in inner circles of political life in England.

When he was on the stage in Kilkenny regularly in 1808-1810, Moore met the English actress Bessy Dyke, and they were married in Saint Martin in the Fields in London in 1811. They moved to Wiltshire in 1818 and went on to have five children.

Moore’s visit to his ancestral home in Wexford in 1835 seems to have been more successful than his visit to Co Kerry over a decade earlier, in 1823. 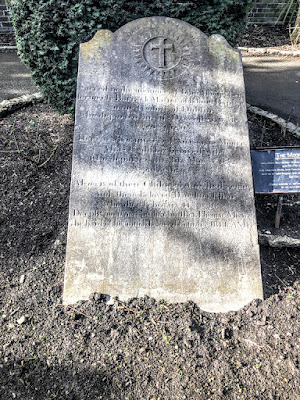 The grave of the Moore Family, the family of the poet songwriter Thomas Moore, in Saint Kevin’s churchyard, near Wexford Street, Dublin (Photograph: Patrick Comerford, 2022)

When Moore came to Wexford on 17 September 1835, he visited his mother's former home in Cornmarket. He also visited his friend Thomas Boyse at his recently completed Bannow House in Grange. On his visit he planted a myrtle tree in the grounds of the Presentation Convent where he played the organ and sang some of his lyrics.

Nicky Rossiter, in his book Wexford – Ireland in Old Photographs, notes how Moore avoided the bustle of the inn by staying at a private house of a Mr N Sparrow in the Bullring that his friend Boyse had sometimes used as lodgings. There he received visitors including the Mayor, a lawyer named Cooper who was an old friend of the family, a musician named PF White, and the editors of the ‘two liberal Wexford newspapers,’ Mr Greene and Mr Devereux.

John Moore was described as a former barrack master of Islandbridge, Co Dublin, when he died on 17 December 1825 aged 84; Anastasia (Codd) Moore died on 8 May 1832 aged 58 or 68; they were buried in nearby Saint Kevin’s Churchyard on Camden Row, off Wexford Street, Dublin.

The family gravestone in Saint Kevin’s churchyard records Moore’s parents and refers to six other children who died young and his sister Helen, who died 18 February 1846, ‘deeply mourned by her brother Thomas Moore, the bard of his much beloved country – Ireland.’ 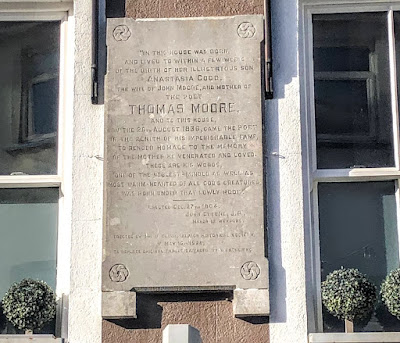 The e plaqueon the the house in Cornmarket, Wexford, where Anastasia Codd was born (Photograph: Patrick Comerford, 2022)

A cut-limestone plaque was erected in 1864 on the first floor of the house in Cornmarket where Anastasia Codd was born to mark the 100th anniversary of her birth.

‘In this house was born and lived to within a few weeks of the birth of her illustrious son Anastasia Codd, the wife of John Moore, and mother of the poet Thomas Moore, and to this house, on the 26 August 1836, came the poet in the zenith of his imperishable fame, to render homage to the memory of the mother he venerated and loved. These are his words, ‘one of the noblest-minded as well as most warm-hearted of all God’s creatures was born under that lowly roof.’

‘Erected by the Uí Ceinnsealaigh Historical Society May 16th 1926, to replace original tablet damaged by weathering.’

Thomas Moore and his wife Bessy (Dyke) were predeceased by all five of their children. This took its toll on Moore’s health and he eventually fell into senile dementia when he was 69 and died on 25 February 1852 aged 72. He is buried in the churchyard of Saint Nicholas’ Church, close to Sloperton Cottage, his country retreat at Bromham in Wiltshire for 35 years. Bessy died at Sloperton Cottage on 4 September 1865.

Because Moore’s children all died in his own lifetime, he had no direct descendants to clarify any recollections of his family origins in Co Kerry. On the other hand, the house where his mother was born and where his parents once lived has survived, and when I lived in Wexford it was known as Molly Mythen’s.

Thomas Moore’s birthplace in Aungier Street is now known as the Thomas Moore Inn. However, this hardly qualifies as an ancestral home. Nor has an ancestral home been identified in Co Kerry either. So, this honour must fall to the house in Wexford where his mother lived even in the months she was pregnant.

The bar on Cornmarket, in the heart of Wexford Town, has been restored in recent years as the Thomas Moore Tavern and still claims to be one of Wexford’s oldest bars. 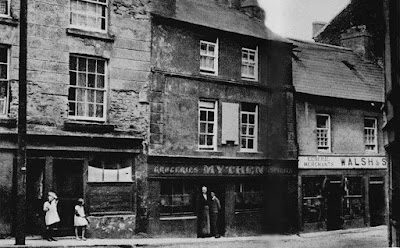 The middle house is the birthplace of Anastasia Codd in Cornmarket and was known as Molly Mythen’s from the late 19th century (Photograph: Famous Wexford People in History)