Praying with USPG and the music of
Vaughan Williams: Monday 15 August 2022

Today in the Calendar of the Church of England in Common Worship is marked simply as ‘The Blessed Virgin Mary’ (15 August 2022), without any indication of any event in her life or any commemoration.

The reflection in the pairsh leaflet in Stony Stratford and Calverton yesterday described the Assumption as ‘the taking up of Mary into the glory of the Resurretion.’ It added, ‘In sharing in the fullness of God’s life and love, we remember that the same promise is made to all belivers, as we turn to the Lord for grace and mercy.’ 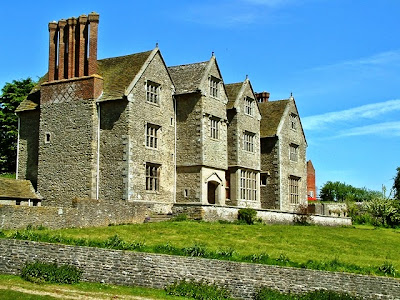 For the rest of this week, I intend listening to On Wenlock Edge, a setting by Vaughan Williams of six poems from AE Housman’s Shropshire Lad.

I wrote over the past few days that I was first introduced to the music of Vaughan Williams when I was a 19-year-old and while I was spending some days in Shropshire.

I was staying in Wilderhope Manor, a 16th-century Elizabethan manor house on Wenlock Edge, seven miles south-west of Much Wenlock, seven miles east of Church Stretton. Wilderhope Manor was built in 1585 for Francis Smallman. The house was in a poor state and uninhabited when it was bought in 1936 by the WA Cadbury Trust and opened as a youth hostel in 1937. Many of the original features, including the oaken stairways, oak spiral stairs and plaster ceilings have survived.

This became my first memorable introduction to the great English composers. I spent some time on Wenlock Edge and visiting the neighbouring villages before hitch-hiking back to Lichfield – a journey of about 50 miles.

Back in Lichfield, I experienced a self-defining moment in the chapel of Saint John’s Hospital, and was invited for the first time to the Folk Masses in the Dominican Retreat Centre at Spode House, near Rugeley, about six miles north of Lichfield.

Ever since, I have associated the music of Vaughan Williams, especially his setting of On Wenlock Edge, with my understanding of my own spiritual growth and development.

Alfred Edward Housman was born at Fockbury, near Bromsgrove in Worcestershire, on 26 March 1859, the eldest child of Sarah and Edward Housman. His mother died on his twelfth birthday, and the anguished created by this cruel coincidence, led to strong questioning of his Christian faith, although he did not abandon the idea of a God.

Housman studied Classics at Saint John’s College, Oxford, and was Professor of Greek and Latin, University College, London (1892), Kennedy Professor of Latin at Cambridge (1911), and a Fellow of Trinity College Cambridge, where Vaughan Williams had been an undergraduate from 1892 to 1895. He died on 30 April 1936.

In reacting to the Boer War, in which his brother Herbert was killed, Housman also anticipated the horror and futility of World War I, and his poems would find fresh relevance of with the outbreak of World War I.

A younger brother, the author and playwright Laurence Housman (1865-1959), first worked as a book illustrator, and the first authors he illustrated included the poet Christina Rossetti. Laurence Housman also wrote and published several volumes of poetry, a number of hymns and carols, and socialist and pacifist pamphlets, and he edited his brother’s poems which were published posthumously.

In 1945, Laurence Housman opened Housman’s Bookshop in Shaftesbury Avenue, London, founded in his honour by the Peace Pledge Union, of which he was a sponsor. In 1959, shortly after his death, the shop moved to 5 Caledonian Road, London. I was first introduced to Housman’s in 1976 by its co-founder and manager, Harry Mister, after meeting him with Bruce Kent of CND at the Hayes Conference Centre in Swanwick that year. Housman’s Bookshop remains a prime source of publications on pacifism and other radical values.

Vaughan Williams composed On Wenlock Edge – a cycle of six songs for tenor, piano and string quartet – in 1909, a year after he had spent three months in Paris studying under Maurice Ravel, the French composer, who was three years younger than him. The first performance took place in the Aeolian Hall in London on 15 November 1909.

After a performance of the cycle in May 1920, Ivor Gurney wrote: ‘The French mannerisms must be forgotten in the strong Englishness of the prevailing mood – in the unmistakable spirit of the time of creation. England is the spring of emotion, the centre of power, and the pictures of her, the breath of her earth and growing things are continually felt through the lovely sound.’

Housman, who only heard the first two songs, wrote to his publisher in December 1920: ‘I am told that composers in some cases have mutilated my poems – that Vaughan Williams cut two verses out of ‘Is my team ploughing?’ I wonder how he would like me to cut two bars out of his music.’

When he was asked about this after Housman’s death in 1936, Vaughan Williams showed no remorse, claiming ‘the composer has a perfect right artistically to set any portion of a poem he chooses provided he does not actually alter the sense … I also feel that a poet should be grateful to anyone who fails to perpetuate such lines as ‘The goal stands up, the keeper/Stands up to keep the goal’.’

In the accompaniment of the first song, ‘On Wenlock Edge,’ the strings are flaring and quivering in powerful simulation of the gales that trouble Wenlock’s woods, and the emotional gales that have troubled the life of humanity since time began.

Vaughan Williams’s approach to the text works on two levels – that of word-painting, and that of bringing out the meanings inherent in phrases or in an entire text. In this first song, for example, he paints words like ‘high’ and ‘gale,’ and depicts the sense of foreboding in phrases like ‘the wood’s in trouble’ and ‘His forest fleece the Wrekin heaves’ in the accompaniment.

On Wenlock Edge the world’s in trouble;
His forest fleece the Wrekin heaves;
The gale, it piles the saplings double,
And thick on Severn snow the leaves.

’Twould blow like this through hot and hanger
When Uricon the city stood:
’Tis the old wind in the old anger,
But then it threshed another wood.

Then, ’twas before my time, the Roman
At yonder heaving hill would stare:
The blood that warms an English yeoman,
The thoughts that hurt him, they were there.

There, like the wind through woods in riot,
Through him the gale of life blew high;
The tree of man was never quiet:
Then ’twas the Roman, now ’tis I.

The gale, it piles the saplings double,
It blows so hard, ’twill soon be gone:
To-day the Roman and his trouble
Are ashes under Uricon.

Almighty God,
who looked upon the lowliness of the Blessed Virgin Mary
and chose her to be the mother of your only Son:
grant that we who are redeemed by his blood
may share with her in the glory of your eternal kingdom;
through Jesus Christ your Son our Lord,
who is alive and reigns with you,
in the unity of the Holy Spirit,
one God, now and for ever.

God Most High,
whose handmaid bore the Word made flesh:
we thank you that in this sacrament of our redemption
you visit us with your Holy Spirit
and overshadow us by your power;
strengthen us to walk with Mary the joyful path of obedience
and so to bring forth the fruits of holiness;
through Jesus Christ our Lord.

Monday 15 August 2022 (The Assumption of the Blessed Virgin Mary):

The theme in the USPG prayer diary this week is ‘Human Trafficking in Durgapur.’ This them was introduced yesterday by Raja Moses, Project Co-ordinator of the Anti-Human Trafficking Project, Diocese of Durgapur, Church of North India.

Today we celebrate the life of the Blessed Virgin Mary. May we be inspired by her story and encouraged by her words. 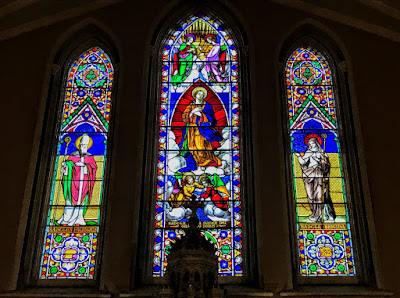 The Assumption depicted in a stained-glass window in the Church of the Assumption in Dalkey, Co Dublin (Photograph: Patrick Comerford)