Tales of ‘missing vowels
and vanishing dreams’
in ‘London Yiddishtown’ I was in Milton Keynes and District Reform Synagogue earlier this week to hear Dr Vivi Lachs talk about her new book, London Yiddishtown, which was published last November.

Vivi Lachs also read from her three selected East End writers, Katie Brown, AM Kaizer and IA Lisky, during a memorable afternoon presentation that was part of the synagogue’s adult education programme.

Dr Vivi Lachs is a social and cultural historian, Yiddishist, teacher and performer. She is a postdoctoral research fellow at Queen Mary University London. Her previous book is Whitechapel Noise: Jewish Immigrant Life in Yiddish Song and Verse, London 1884-1914 (Wayne State University Press, 2018). She was a Yiddish Book Centre Fellow in 2019, and her latest book, London Yiddishtown, is in part a result of that fellowship.

Vivi’s PhD at Royal Holloway in 2016 offered a new reading of East End immigrant history gleaned from the lyrics of the popular culture of the Yiddish-speaking immigrant community. She looked at poetry, satire, music-hall song, and insider debates on politics, sex and religion, and analysed them through the lenses of transnationalism and the push for anglicisation.

Her current research draws out social histories from Yiddish short stories written in London in the 1930s and 1940s. Her translated stories offer newly framed perspectives on fascism, antisemitism, Zionism and generational change.

In her latest book, London Yiddishtown, she looks at East End Jewish Life in Yiddish Sketch and Story, presenting a selection of previously untranslated short stories and sketches by three selected writers, Katie Brown, AM Kaizer, and IA Lisky.

This is a book for the general reader and the academic alike. These intriguing and entertaining tales build a picture of a lively East End community in the 1930s and 1940s struggling with political, religious and community concerns.

Vivi Lachs includes a new history of the Yiddish literary milieu and biographies of the writers, with information gleaned from articles, reviews, and obituaries published in London’s Yiddish daily newspapers and periodicals.

This was the time when Fascism and Nazism were sweeping across Europe and of the Spanish Civil War. This was a time when Oswald Moseley was trying to march his black-shirts through the East End and of the Battle of Cable Street. And these were the decades of World War II and the Holocaust.

Her stories from the East End tell of clashing ideologies of communism, Zionism, fascism, and Jewish class difference. She retells stories of anti-fascist activism, political debate in a kosher café, East-End extras on a film set, and a hunger march by the unemployed.

Her tales explore philanthropy, upward mobility, synagogue politics, and competition between Zionist organizations. They expose the character and foibles of the community and make fun of foolish and hypocritical behaviour.

These are tales of ‘missing vowels and vanishing dreams.’ We read of competing cantors for a synagogue position in London, disaffected bar mitzvah boys struggling to learn their maftir, and pompous benefactors at the opening of an East End community kitchen.

Each section begins helpfully with a biography of the writer, before moving on to their stories with contextual notes.

Vivi Lachs is also a singer at Klezmer Klub and a performer and composer with Katsha’nes, a quartet of four women who specialise in Edwardian Jewish hall music. She has performed with Kathsha’nes on the 14-track CD Don’t ask silly questions. But instead of singing for us in Milton Keynes this week, she read excerpts from selected short stories by her three chosen writers.

Yehuda Itamar (IA) Lisky tells stories that recall ideological divisions among Zionists, the plight of hunger marchers and the rise of fascism.

Katies Brown’s sketches address episodes of daily life that reveal generational misunderstandings, and point to the different attachments to Jewish identity of the immigrant generation and their children, creating unresolvable fractures.

Arnold (Arye Myer) Kaizer was a journalist and community activist. In his story ‘Choosing Cantors’ (pp 88-91), set in Whitechapel, he tells of how ‘the cantors come from the four corners of the earth to audition. As you walk past a synagogue, you hear someone inside trilling, modulating, embellishing with ornaments, performing vocal tricks, and penetrating the highest echelons of heaven.’

The community is enthused by cantors with secondary skills: ‘We’ve already had a doctor-cantor, a professor-cantor, a pharmacist-cantor, an engineer-cantor, and even a comedian-cantor. Oh, and was he a joker! The congregation really liked him. He put a kind of clowning into the prayers, with strange affectations and facial expressions. When he blessed the new moon, people were rolling about with laughter.’

In the story ‘Where it Bubbles’ (pp 84-87), we meet the benefactors of a new kosher kitchen in Whitechapel providing subsidised meals for workers. At the opening event, with pompous one-upmanship, one benefactor after another describes their favourite meals: ‘One chap, the proprietor of a workshop with a pregnant-looking potbelly, squat and round as a bathtub, wanted to know what sort of soup they would be serving in the kitchen. ‘I myself,’ he proudly informed me, ‘like an international soup. What I mean is a barley soup with short lokshn, kliskes, farfl, beans, small shallots, carrots, giblets, veal bones, and any other bones with meat on them. I want to know if they give that sort of international soup or just a simple broth made solely from chicken.’

In all, London Yiddishtown presents 27 stories from these three writers. They offer fascinating insights into East End immigrant life, political, satirical, and yet a reminder that somewhere along the way everyone is a descendant of immigrants. 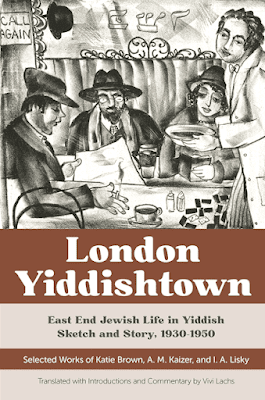