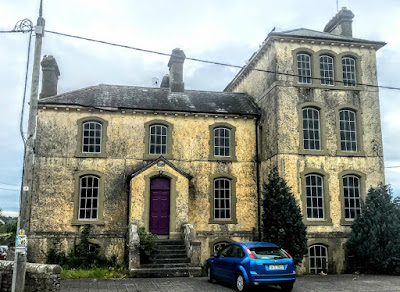 Pallasgreen in East Co Limerick has pretty, traditional thatched pubs, an unusual bicycle museum with a themed café, the crumbling ruins of a mediaeval tower house and castle, and hidden churches – all enough to invited tourists and travellers to take a break on the main road between Limerick and Waterford.

But during my visit over the bank holiday weekend, I found the former police barracks was also a striking building in Pallasgreen.

This former Royal Irish Constabulary barracks is a two-storey block with a cellar and a three-storey tower with a pyramid roof. It was designed by the Dublin-born architect Robert John Stirling (1841-1915) and built in 1874 by the contractor Patrick Kenna.

This impressive substantial barracks incorporates architectural features that are characteristic of the late Victorian period, including the projecting block, porch and fine rendered detailing.

Despite its unconventional form, the building is well proportioned. Although it is now disused, the barracks retains most of its original form and massing, as well as much of the original fabric. 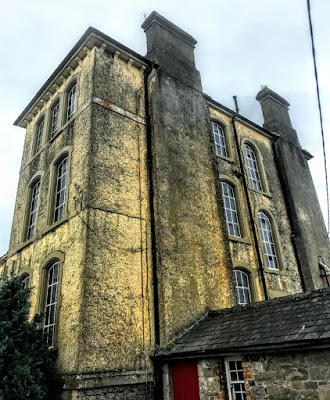 The former RIC barracks is one of three built to similar designs in this area (Photograph: Patrick Comerford, 2019)

This is one of three police barracks built to similar designs in this locality. The other two are in Bruff and Tipperary town.

Although the barracks is now vacant, the high quality of its design, and its scale and height make it a striking building.

The architectural features in this former barracks include the gable-fronted porch at the front, the two-bay three-storey over basement block, the camber-headed opening in the porch with render block-and-start surrounds, and the flight of limestone steps at the entrance with rendered balustrades and limestone copings. 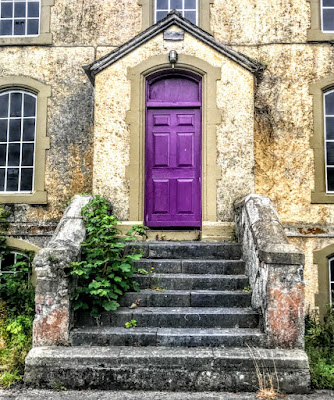 The barracks was designed by the Dublin-born architect Robert John Stirling (1841-1915). Both his father, John Stirling, and his brother, William Stirling, were architects too, and Robert Stirling received his architectural training from his father, and joined the staff of the Board of Works as a draughtsman in 1860.

Stirling remained with the Board of Works for 24 years. From the late 1870s on, he was a land improvement inspector, but also worked briefly in private practice as a land surveyor and valuer with James Hargrave Bridgford in Bridgford & Stirling in the 1870s.

He set up his own private practice in 1884 and was a surveyor with the Civil Service Building Society until 1893. Later, he was an architect with the Dublin estates of Trinity College Dublin, designing the Pathology Building or Parsons Building, extending Nos 22 to 26 at the Rubrics, and rebuilding New Square. 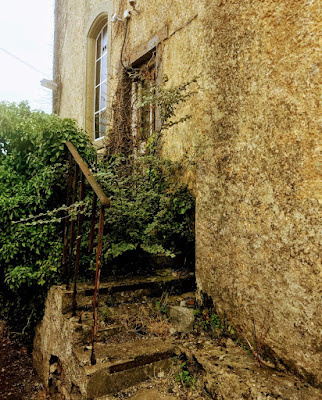 The barracks has been vacant for many years, but remains a striking building (Photograph: Patrick Comerford, 2019)

My grandfathers home village and from where he was recruited into the RIC c 1905. I wonder why the structure has not been reused as even after all this time it seems in reasonable condition. Perhaps still so many divisive reminders of that era? Thank you for posting this and I hope I can reuse for family genealogy purposes?

Of course you can use them Monica. The only limits I impose on reusing my photographs are: 1, I should be named as the photographer (I retain all rights); 2, they are not used to promote any political views; 3, when they are used for religious purposes, they must not imply that I agree with or endorse those religious views; 4, they must not be re-used for business or to promote a product or brand (big businesses can afford to pay a photographer, small businesses and not-for-prophet organisations can talk to me privately); 5, I appreciate being sent a link so I can keep track of how my photographs are used.

My Dad was stationed in that barracks from 1974 - 1979 as a local Garda. I remember visiting the cells underground as a young boy. My Mother always said she could feel a presence in that building when we lived there. Something wasn't right about it. Then he got moved to Henry St Limerick.