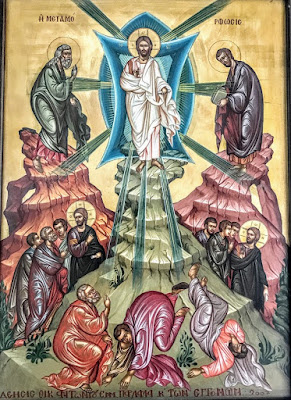 The Transfiguration (Luke 9: 28-36) … an icon in the parish church in Piskopianó in Crete (Photograph: Patrick Comerford, 2017)

10 On their return the apostles told Jesus all they had done. He took them with him and withdrew privately to a city called Bethsaida. 11 When the crowds found out about it, they followed him; and he welcomed them, and spoke to them about the kingdom of God, and healed those who needed to be cured.

12 The day was drawing to a close, and the twelve came to him and said, ‘Send the crowd away, so that they may go into the surrounding villages and countryside, to lodge and get provisions; for we are here in a deserted place.’ 13 But he said to them, ‘You give them something to eat.’ They said, ‘We have no more than five loaves and two fish – unless we are to go and buy food for all these people.’ 14 For there were about five thousand men. And he said to his disciples, ‘Make them sit down in groups of about fifty each.’ 15 They did so and made them all sit down. 16 And taking the five loaves and the two fish, he looked up to heaven, and blessed and broke them, and gave them to the disciples to set before the crowd. 17 And all ate and were filled. What was left over was gathered up, twelve baskets of broken pieces.

21 He sternly ordered and commanded them not to tell anyone, 22 saying, ‘The Son of Man must undergo great suffering, and be rejected by the elders, chief priests, and scribes, and be killed, and on the third day be raised.’

23 Then he said to them all, ‘If any want to become my followers, let them deny themselves and take up their cross daily and follow me. 24 For those who want to save their life will lose it, and those who lose their life for my sake will save it. 25 What does it profit them if they gain the whole world, but lose or forfeit themselves? 26 Those who are ashamed of me and of my words, of them the Son of Man will be ashamed when he comes in his glory and the glory of the Father and of the holy angels. 27 But truly I tell you, there are some standing here who will not taste death before they see the kingdom of God.’

While everyone was amazed at all that he was doing, he said to his disciples, 44 ‘Let these words sink into your ears: The Son of Man is going to be betrayed into human hands.’ 45 But they did not understand this saying; its meaning was concealed from them, so that they could not perceive it. And they were afraid to ask him about this saying.

A prayer today (International Anti-Corruption Day) from the Prayer Diary of the Anglican mission agency USPG, United Society Partners in the Gospel:

Let us pray in penitence for how we have allowed corruption to affect equal distribution of natural resources and perpetuate poverty. 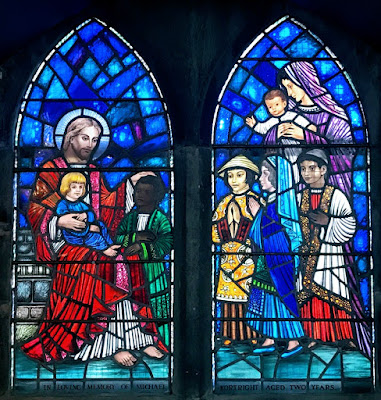