‘Truly I tell you, just as you
did it to one of the least
of these … you did it to me’

‘King of Kings and Lord of Lords’ … Christ the King depicted in a stained-glass window in a church in London (Photograph: Patrick Comerford)

The Sunday before Advent, the Kingship of Christ
(Mission Sunday)

Many of us may remember this Sunday from our childhood as ‘Stir-up Sunday.’ It was a play on words: the traditional collect in the Book of Common Prayer on this Sunday, the last Sunday in the Church Year, invited us to pray:

Stir up, we beseech thee, O Lord, the wills of thy faithful people;
that they, plenteously bringing forth the fruit of good works,
may of thee be plenteously rewarded;
through Jesus Christ our Lord. Amen

This was, of course, the time of the year that mothers and families began to stir-up the mixture for Christmas cakes and puddings, ‘stirring up’ the mixture that played on those words about ‘the fruit’ as they went about their good works.

After the mixture was poured out into baking trays, how we begged our mothers or grannies to lick the big yellow mixing bowl and the wooden spoons!

The year was coming to a close, the evenings were getting darker, and now we shared the sweet taste of the promises of Christmas, a child’s way of preparing for the coming of Christ and new beginnings.

This Sunday before Advent, however, invites us to think about the coming Christ as Christ the King.

The concept of Christ as King may be difficult for many people in a modern, democratic European society, particularly in an Ireland where we have been blessed with the bravery and charisma of not one but three successive elected Presidents as heads of state.

The mere mention of kingship and monarchy may evoke images of the extravagance of Versailles, the anachronism of Ruritarian-like pretenders, or inherited privilege in a class-ridden society.

However, since 1925, the celebration of Christ the King or the Kingship of Christ has been part of the calendar of the wider Western Church. It was first suggested by Pope Pius XI in an encyclical (Quas Primas), when he castigated secularism in Europe and declared the secular powers ought to recognise Christ as King and that the Church needed to recapture this teaching.

At the time, the entire idea of kingship was quickly losing credibility in western societies, not so much to democracy but to the rise of fascism: Mussolini was in power in Italy since 1922, and a wave of fascism was about to sweep across central Europe.

The concept of Christ the King challenged the idea that presidents and dictators could hold power based on prejudice and populism, without any promise of justice or attention to the needs of the oppressed, and the sufferings of the impoverished, the marginalised and minorities.

A king – no matter how absurd and anomalous that concept seems to us today – was supposed to exercise or hold on to power not for himself or for his own enrichment and pleasure, but to embrace, embody, express, the needs of all the people, especially those in danger of being exploited or oppressed.

That fading – today, almost irrelevant – concept of the ‘Divine Right of Kings’ was not for the benefit of the monarch, but to save the people.

And it is in sharp contrast to the troubling images today of a president who refuses, in the face of the democratic choice of the people, to leave office or to prepare to hand over to his elected successor.

True majesty is reflected in being truly gracious. In a democracy, it should always be about the people – especially those who are in danger of being counted out – and never about the office-holder.

The values of the Kingdom of God can never give way to the cat-calls and the rabble-rousing of populist protesters or presidents who think they are more valuable than their people.

The Sunday before Advent is a challenge to think not only about Christ’s coming, at his second coming, and the coming of the Kingdom of God.

In this diocese, this Sunday is also marked as Mission Sunday.

I spent a good part of last week at a two-day meeting of the trustees of the Anglican mission agency USPG (United Society Partners in the Gospel). It was a ‘virtual’ meeting, hosted on Zoom, and we discussed how the values of the Church in mission can be signs or foretastes of the coming Kingdom of God. We talked about empowering women, caring for the sick, challenging racism, acting on climate change … and many other important challenges.

Mission Sunday is an opportunity to draw breath and think of what the Kingdom of God might be like, how the Church reflects that, and how we should be calling into the kingdom those who are in danger of being marginalised and oppressed

This year, for Mission Sunday, the Diocesan Mission Council has decided to support the work of two projects whose work has become even more crucial – life-saving – during the pandemic for people in danger of being counted out.

Women’s Aid works to stop domestic violence against women and children, offering support and providing hope. They are reporting a 43% increase in calls during the lockdown, and a 71% rise in visits to their website. And these are not just shocking statistics: these are real women, reaching out, often in the dead of night, to be heard, believed and supported.

Finally, the bishop (Bishop Kenneth Kearon) has also asked for prayers this Sunday that respond to ‘Taking the Knee’ by praying for racial justice and equality.

The resources produced for this Sunday call us to affirm that racism is an affront to God and contrary to the Christian faith; that racism denies the reconciling work of Christ is for all people and breaks down the walls of division across all human distinctions; and that racism denies our common humanity in creation and our belief that all are made in God’s image. They remind us that our fundamental identity is found in Christ and not, as racism asserts, in terms of race.

We can prepare for these three events by responding to these three needs as reflections of our hopes for the Kingdom of God: youth mental health, domestic violence, and the need for racial justice.

And when the Kingdom of God comes, may we bring ‘forth the fruit of good works,’ may we ‘Enter his gates with thanksgiving and his courts with praise’ (Psalm 100: 4). 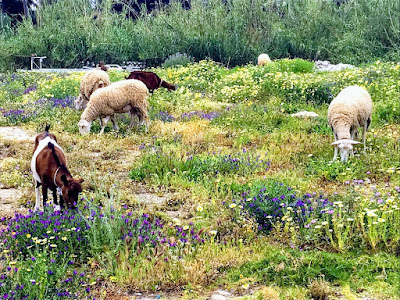 ‘He will separate people one from another as a shepherd separates the sheep from the goats’ (Matthew 25: 32) … sheep and goats grazing together in a field in Platanias near Rethymnon in Crete (Photograph: Patrick Comerford, 2019) 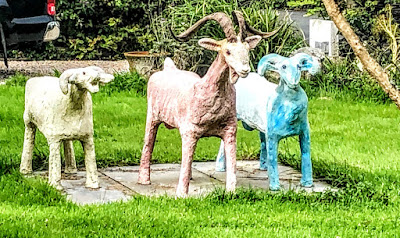 ‘He will put the sheep at his right hand and the goats at the left’ (Matthew 25: 33) … sheep and goats in a sculpture in a garden in Knightstown on Valentia Island, Co Kerry (Photograph: Patrick Comerford, 2020)

Eternal Father,
whose Son Jesus Christ ascended to the throne of heaven
that he might rule over all things as Lord and King:
Keep the Church in the unity of the Spirit
and in the bond of peace,
and bring the whole created order to worship at his feet,
who is alive and reigns with you and the Holy Spirit,
one God, now and for ever. Amen.

Almighty God,
who called your Church to witness
that you were in Christ reconciling the world to yourself:
Help us to proclaim the good news of your love,
that all who hear it may be drawn to you;
through him who was lifted up on the cross,
and reigns with you and the Holy Spirit,
one God, now and for ever. Amen.

Stir up, O Lord,
the wills of your faithful people;
that plenteously bearing the fruit of good works
they may by you be plenteously rewarded;
through Jesus Christ our Lord. Amen. 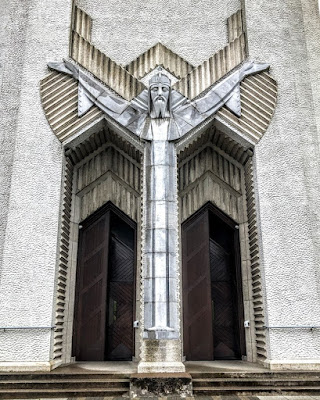 Christ the King … a large sculpture by John Maguire above the entrance to the Church of Christ the King in Turner’s Cross, Cork (Photograph: Patrick Comerford, 2020) 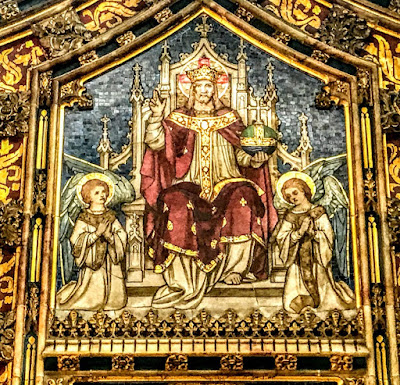 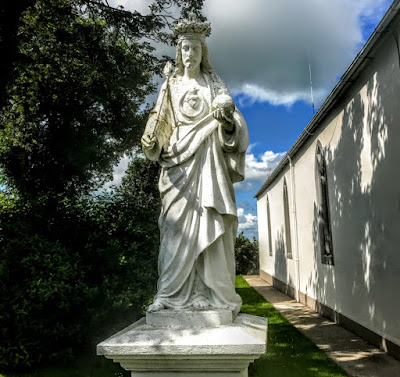 ‘He has put all things under his feet and has made him the head over all things’ (Ephesians 1: 22) … a statue of Christ the King in the grounds of the parish church in Broadford, Co Limerick (Photograph: Patrick Comerford)