Tales of the Viennese Jews:
19, Adele Bloch-Bauer and
Gustav Klimt’s ‘Lady in Gold’ 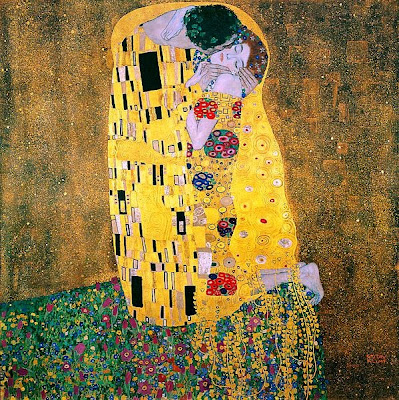 ‘The Kiss by Gustav Klimt’ … is it an ‘idealised portrait’ of Adele Bloch-Bauer?

The Kiss was painted by Gustav Klimt , the leading Austrian Symbolist painter in 1908-1909, at the high point of his ‘Golden Period,’ when he painted a number of works in a similar gilded style.

Klimt’s The Kiss is so popular that it is impossible for visitors to Vienna to avoid finding copies of it everywhere – on postcards, mugs, cheap prints, chocolate wrappings, and cheap souvenirs. Yet it continues to fascinate and enthral in a way that gives it iconic status.

Gustav Klimt (1862-1918) was an Austrian symbolist painter and the most prominent member of the Vienna Secession movement. His primary subject was the female body, and his work is marked by a frank eroticism.

The Kiss is painted on a canvas that is a perfect square, 180 cm × 180 cm. We see a kissing, embracing couple whose bodies are entwined in elaborate robes decorated in a style influenced by both the Art Nouveau style and the earlier Arts and Crafts movement. The two are locked in intimacy, while the rest of the painting dissolves into a shimmering, extravagant flat pattern, lost on the edge of a patch of flowery meadow.

Klimt painted The Kiss with oil and applied layers of gold leaf that give the painting its strikingly modern, yet evocative, appearance. The painting is now in the Österreichische Galerie Belvedere museum in the Belvedere Palace, Vienna. It is a symbol of Vienna Jugendstil – Viennese Art Nouveau – and is Klimt’s most popular work. It was received enthusiastically, but earned Klimt his reputation as an enfant terrible.

Klimt’s biographer Adam Whitford points out that some preliminary sketches for The Kiss show a bearded figure that was possibly a self-portrait, and he claims the female partner is an ‘idealised portrait’ of Adele Bloch-Bauer.

The only evidence to support this theory is the position of the woman’s right hand, as Adele had a disfigured finger following a childhood accident.

Adele Bauer was born into a wealthy Jewish Viennese family. Her father was a director of the Wiener Bankverein, the seventh largest bank in the Austrian Empire, and the general director of Oriental Railroads. She met Klimt in the late 1890s, but opinion is divided on whether they had an affair.

The artist Catherine Dean believed Adele was ‘the only society lady painted by Klimt who is known definitely to be his mistress.’ Melissa Müller and Monica Tatzkow say ‘no evidence has ever been produced that their relationship was more than a friendship.’

Adele’s parents arranged a marriage with Ferdinand Bloch (1864-1945), a banker and sugar manufacturer who was born in Prague. Her older sister had previously married Ferdinand’s older brother. When Adele and Ferdinand married in 1899, she was 18 and he was 35, and they decided to share the family name Bloch-Bauer. Adele suffered two stillbirths and her third child died two days after birth.

Adele brought together writers, politicians and intellectuals for regular salons at their home. The couple shared a love of art, and patronised several artists, collecting 19th-century Viennese paintings, modern sculpture and porcelain.

In 1903, Ferdinand bought his first Klimt work from the artist, Buchenwald (‘Beech Forest’). 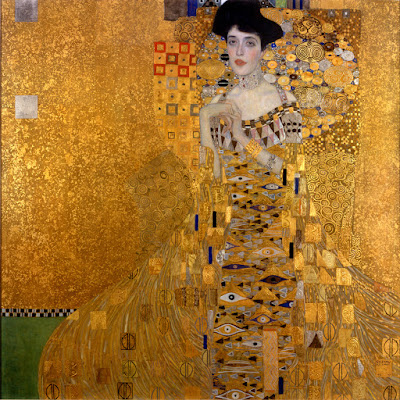 Portrait of Adele Bloch-Bauer I, painted by Klimt in 1903-1907, was commissioned by her husband Ferdinand. The painting, later known for being stolen by the Nazis in 1941, is the final and most fully representative work of Klimt’s golden phase. Klimt’s second portrait of Adele was completed in 1912, and the two are among several works by Kilmt owned by the family.

Meanwhile, Ferdinand acquired the Jungfern Breschan and Odolena Voda estate in Bohemia in 1909, where he lived in the Lower Castle and housed his art collections. After the collapse of the Habsburg Monarchy, he opted for Czechoslovak citizenship in 1918/1819 and his estate 15 km north of Prague became his main residence.

When Adele died in 1925, she asked in her will that the artworks by Klimt be left to the Galerie Belvedere in Vienna, although they belonged to Ferdinand, not her. Following the Nazi invasion and occupation of Austria, Ferdinand fled Prague to Paris and then to Zurich. He left behind much of his wealth, including his large art collection, and died in poverty in 1945.

Klimt’s Portrait of Adele Bloch-Bauer I was stolen by the Nazis in 1941, along with the remainder of Ferdinand’s assets, after the pretext of tax evasion. The lawyer acting for the Nazi state gave the portrait to the Galerie Belvedere, claiming he was following Adele’s wishes in her will. In his will, Ferdinand stated his estate should go to his nephew and two nieces.

The Austrian journalist Hubertus Czernin revealed in 1998 that the Galerie Belvedere held several works stolen from Jewish owners during the Holocaust and World War II. The gallery had refused to return the art to their original owners, or to acknowledge any theft.

Ferdinand’s nieces, Maria Altmann took a case against the gallery for the return of five works by Klimt. After a seven-year legal action, an arbitration committee in Vienna agreed that the portrait and other paintings had been stolen from the family and that it should be returned to Altmann. She sold it the same year for $135 million to the businessman and art collector Ronald Lauder, who placed it in the Neue Galerie, the New York-based gallery he co-founded.

The history of the Portrait of Adele Bloch-Bauer I and the other paintings taken from the Bloch-Bauers has been recounted in three documentary films, Stealing Klimt (2007), The Rape of Europa (2007) and Adele’s Wish (2008).

The painting’s history is described by the journalist Anne-Marie O’Connor in her book The Lady in Gold: The Extraordinary Tale of Gustav Klimt’s Masterpiece, Portrait of Adele Bloch-Bauer (2012). The history, as well as other stories of other stolen art, is told by Melissa Müller and Monika Tatzkow in Lost Lives, Lost Art: Jewish Collectors, Nazi Art Theft, and the Quest for Justice (2010). The story of Adele Bloch-Bauer and Maria Altmann formed the basis of the novel Stolen Beauty (2017) by Laurie Lico Albanese.

Maria Altmann died in 2011, aged 94. Her story was dramatised in the film Woman in Gold (2015), starring Helen Mirren as Maria and Ryan Reynolds. 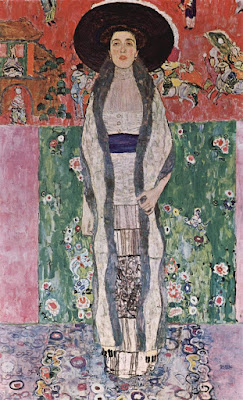 ‘Portrait of Adele Bloch-Bauer II’ … completed by Klimt in 1912