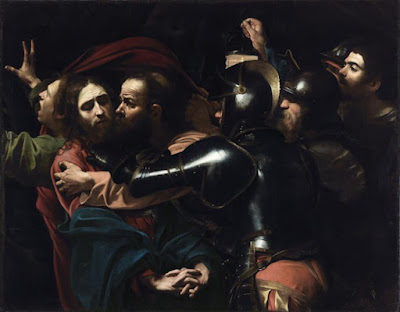 ‘The Taking of Christ’ by Caravaggio … bought by Dr Marie Lea-Wilson after her husband was murdered in Gorey, Co Wexford (National Gallery of Ireland)

During my ‘road trip’ visit to Co Wexford last week, I visited Christ Church, Gorey, and last night in this blog (1 March 2022) I described the windows from the Harry Clarke Studios that are unique treasures in this Church of Ireland parish church in north Wexford. But the church and these windows also have an interesting link with one of the greatest art discoveries in Ireland in recent decades.

Two of the windows commemorate Percival Lea-Wilson, the District Inspector for North Wexford in the Royal Irish Constabulary, who was shot dead by the IRA on the streets of Gorey on 15 June 1920 during the War of Independence.

Percival Lea-Wilson was then 33 and was a marked man because of his alleged brutal treatment of Tom Clarke, one of the signatories of the Easter Proclamation, and other republican prisoners after the 1916 Rising.

It is said Michael Collins had seen Lea-Wilson humiliating and mistreating Tom Clarke in the Rotunda Gardens after the Easter Rising. Clarke was ordered to strip naked in front of the other prisoners, an incident depicted in the RTÉ drama Rebellion.

Collins got his revenge four years later when Lea-Wilson was gunned down in daylight after buying a newspaper at the railway station in Gorey.

The murder of Lea-Wilson is listed in the brigade activity reports for the North Wexford Brigade (3 Eastern Division) of the IRA as an operation sanctioned by IRA General Headquarters involving 10 men, of whom five took part in the shooting and five in scouting.

In his application for a military pension, Sean Whelan, an IRA activist in Co Wexford, said he shot Lea-Wilson in the shoulder during the attack, but added: ‘I was supposed to be the best shot and I was selected and it turned out I was not.’

Lea-Wilson had married Galway-born Marie Ryan in 1914. The effect of his murder on her life would become a key factor in one of the greatest art discoveries of the 20th century.

After her husband’s murder, Dr Lea-Wilson went on to train as a doctor at Trinity College Dublin, where she graduated in 1928. She was one of only three women in the class, and became a noted paediatrician at the Children’s Hospital in Harcourt Street, Dublin. Although she was described as somewhat stern, she attended Mass daily before work and was devoted to her four dachshunds.

Dr Lea-Wilson forged a strong connection with the Jesuit community in Dublin, receiving spiritual support from Father Tom Finlay at the Jesuit house on Leeson Street, which may explain her subsequent gift of an important painting to them in the 1930s.

Dr Lea-Wilson bought the painting at an auction in 1924, four years before she qualified as a paediatrician. She gifted the painting to the Jesuits in the 1930s in thanks for their support after her husband’s murder. She died in 1971.

Sergio Benedetti, a conservator at the National Gallery of Ireland, was invited to the Jesuit house in Leeson Street in August 1990 to look over the collection of paintings. It all seemed a matter of routine until he came to The Taking of Christ, then attributed to the Dutch painter Gerrit van Honthorst.

Benedetti was startled. As a specialist in Caravaggio and his followers, he was convinced that he was looking not at a Honthorst – he painted in the same style – but at Caravaggio’s long-lost original, which he painted in 1602 for the Mattei family, his patrons in Rome.

Three years of historical detective work began. Working through the Mattei archives, two Italian PhD students traced the history of the painting from commission to payment to the year 1793, when a careless archivist misattributed it to Honthorst.

Ten years after that it was sold – as a Honthorst – along with other paintings to a Scottish landowner, and a century later, having been turned down by the Scottish National Gallery, it was bought by an Edinburgh art dealer who sold it to an unknown buyer for £8.8.0 in 1921.

The painting was bought at an auction in 1924 by Lea-Wilson’s widow. Four years later, she qualified as a paediatrician in 1928. A devout Catholic, she gifted the painting to the Jesuits in the 1930s in thanks for their support after her husband’s murder. She died in 1971.

Michelangelo Merisi da Caravaggio (1571-1610) painted The Taking of Christ in 1602 as a commission for the distinguished patrician and city official Ciriaco Mattei (1545-1614). The painting remained in the Mattei family, inherited by various family members, for the next 200 years. However, by the second half of the 18th century, Caravaggio’s name was no longer attached to the painting. At this time, a number of paintings in the Mattei collection were reattributed, and Caravaggio’s The Taking of Christ was incorrectly attributed to a Dutch artist, Gerrit van Honthorst (1592-1656).

Honthorst was a follower of Caravaggio, and was particularly influenced by the Italian painter’s use of dramatic shadow and light (chiaroscuro) in his compositions. He painted many candle-lit scenes that earned him the Italian nickname Gherardo delle Notti (Gerard of the Night Scenes). However, in the Mattei archives his nickname was misspelled as Gherardo della Notte. This mistake, repeated in every successive document, was an important clue during the authentication process in the 1990s.

Duke Giuseppe Mattei sold The Taking of Christ, along with other paintings, in 1802 to William Hamilton Nisbet, a wealthy Scottish art collector in Rome. Records from this sale list the painting as Imprigionamento del N.S. di Gherardo della Notte. The mistake in spelling (Notte rather than Notti) was repeated on the gilt tablet made for the new frame.

The painting remained in the Hamilton family for 119 years, until it was sold at auction by Dowell’s in Edinburgh in 1921, and again in 1922. At this point, it was owned by Major the Charles Hubert Francis Noel (1885-1947), a younger son of Charles William Francis Noel (1850-1926), 3rd Earl of Gainsborough, and his Irish-born wife, Mary Elizabeth Dease. (For my story of Major Noel’s aunt, Lady Blanche Noel, and her marriage to Thomas Murphy, click HERE).

Dr Marie Lea-Wilson bought the painting in 1924 and brought it to Ireland. The first record of its presence in Ireland is a receipt for £20 for the restoration of its frame by James Hicks (1886-1936), of 5 Lower Pembroke Street, Dublin, a well-known furniture maker and restorer, in 1924.

When Dr Lea-Wilson presented the painting to the Jesuit Fathers of Leeson Street it was still attributed to Honthorst. It remained in their house, hanging in the dining room, for over 50 years.

In August 1990, Father Noel Barber SJ contacted the National Gallery of Ireland about assessing the works of art in the Jesuit House. A senior conservator, Sergio Benedetti, visited the house and noticed the potential in the dark painting hanging in the dining room. Even though it was obscured by discoloured varnish, he recognised the subject and composition as those of the ‘lost’ Caravaggio painting. Three years of meticulous research, analysis and consultation with international experts followed to authenticate and conserve the masterpiece.

After the discovery, Father Noel Barber played a pivotal role in the decision to place Caravaggio’s painting on indefinite loan to the Irish public from the Jesuit Community in Leeson Street, acknowledging the generosity of Dr Marie Lea-Wilson.

The Jesuits gave the painting on an indefinite loan to the National Gallery of Ireland, where it remains one of the most significant masterpieces on display and one of its most popular exhibits.

As Father Noel Barber said, it is ‘a strange thread of events’ that led to this magnificent painting finding its place on the wall of the National Gallery of Ireland.

Posted by Patrick Comerford at 18:01