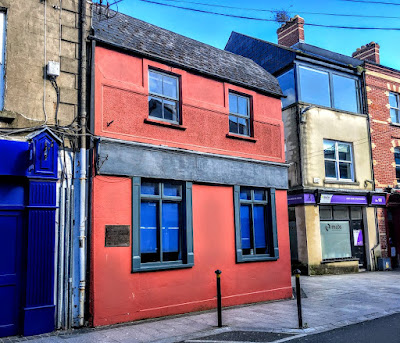 The site of Stonebridge in Wexford … known as Jew’s Bridge in 1764 (Photograph: Patrick Comerford, 2022)

In every city I visit, I seek out the synagogues and the former Jewish quarters and ghettoes. In Malta recently, I went in search of the Jews’ Gate in Valletta, a reminder of the restrictions placed on Jewish merchants by the Knights of Saint John, and in search of the lost synagogue and Jewish quarter in the ‘Silent City’ of Mdina, the mediaeval capital of Mala before it came into the hands of the Order of Saint John.

But, apart from a story about a Jewish photographer and a murder in 1910 that may have inspired the creation by James Joyce of some of the characters in Ulysses, until this week I have known of no possible historical Jewish associations with Wexford.

So, I was surprised to learn on my return to Wexford earlier this week that Stonebridge – the oldest though no longer surviving bridge in the town – was once known as Jews’ Bridge.

Stonebridge was known as Jews’ Bridge in 1764. Perhaps it was given this name because a Jewish merchant of possible Sephardic descent, had moved to Wexford in the 1750 or 1760s, and who lived at this end of the Main Street, close to the Quays and Stonebridge Castle.

The lane running from Stonebridge to Paul’s Quay marks the boundary between the mediaeval parishes of Saint Doologe’s and Saint Mary’s in Wexford town.

The name Stonebridge recalls the location of the oldest bridge in the town. The original bridge was built over the Bishopswater River, and probably marked the northern gate of the earliest Norse or Viking settlement at Wexford.

A fading plaque on the shopfront of of a former picture framing business recalls that the Bishopswater Bridge at the head of the street dated back to the Norse period. Later, the bridge was built in stone, and became the Bridge of Wexford.

Norse and mediaeval fishing fleets berthed in the estuary below the bridge. It is recorded that in 1172, King Henry II paid £45 for Wexford fish.

The first recorded murder or manslaughter in Wexford town took place at Stonebridge in mid-afternoon 25 February 1560. A quarrel broke out between Thomas Walsh a shoemaker, and Geoffrey Brian, a mariner. The insults led to blows being exchanged, before Brian stabbed Walsh below the chest.

Walsh died of his wounds and Brian was convicted of his killing, although the records do not say how he was punished.

Stonebridge Castle was also known as Staffford’s Castle, and was owned by James Stafford, the man blamed in tradition for betraying Wexford to Cromwell.

At one time, Stonebridge was known as Wexford Bridge. But, for some unknown, perhaps even inexplicable, reason, it was known as Jew’s Bridge in 1764.

Meanwhile, Stonebridge Castle, which became a gaol in 1665, was used to hold prisoners during the 1798 Rising. A new gaol was built at Spawell Road in 1812, and Stonebridge Castle became a ‘Lunatic Asylum’ and a ‘house of industry’ for vagrants and prostitutes, where the inmates were used to clean the streets of the town.

Stonebridge Castle was eventually demolished in 1866 to provide land for development along the quays. 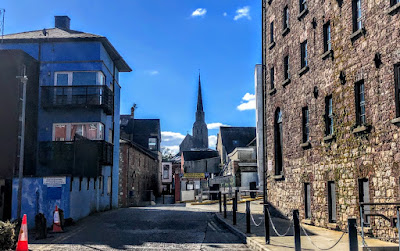 The lane running from Stonebridge to Paul’s Quay marks the boundary between the mediaeval parishes of Saint Doologe’s and Saint Mary’s in Wexford (Photograph: Patrick Comerford, 2022)

The Stonebridge apartments on Paul’s Quay were built originally in 2008 as a lavish, 73-apartment complex. But the economic crash struck, the building never opened for use, and the apartments lay vacant for eight years until they were bought for redevelopment by the Talbot Hotel group, and are now known as the Talbot Suites at Stonebridge.

I can find no documentary evidence of even a small Jewish community in Wexford in the mid-18th century, and certainly no evidence of a synagogue in the town. However, the violent feud between Thomas Walsh and Geoffrey Brian in 1560 brought me to recall this Friday evening a murder in Wexford 450 years later, on 7 May 1910.

The tragic story of Simon Bloom, who was jilted and vainly planned an apparent double suicide in his photographer’s shop in Wexford is told in Louis Hyman’s The Jews of Ireland, and was retold in part more recently on the Wexford Hub website.

Mary Anne Wildes, an 18-year-old Wexford woman, was found with her throat cut at an apartment in The Bullring, Wexford. The apartment, above a bar called The Cape of Good Hope, was being rented at the time by Simon Bloom (29), whose family lived in the Clanbrassil Street or ‘Little Jerusalem’ area of Dublin and Armstrong Street in Harold’s Cross.

Simon Bloom was a self-described artist who was known throughout Wexford for selling picture frames and photo enlargements.

When police entered Bloom’s apartment, they found him sitting in a chair with a wound to his throat and a letter in his hand – an unsuccessful attempt at suicide. He told the police that Mary Anne and he had agreed to die together, and he kept repeating and spelling the word ‘love.’ In his hands he held a rambling, bloodstained and unsigned letter, addressed ‘To those who would judge the scales of humanity and justice.’

Bloom was found guilty and spent a few years in the Dundrum Lunatic Asylum for the Criminally Insane in Dublin. After his release, Bloom moved to Chicago, where, it is said, he changed his name and became ‘a genial Jewish patriarch’ in the suburbs.

Louis Hyman also wonders whether Leopold Bloom is also, in part, modelled on Simon Bloom’s brother, Benny Bloom, who was still living in Dublin in the 1960s.

Meanwhile, on this Friday evening, and during this Ulysses centenary year, the former Jew’s Bridge in Wexford remains a reminder of the diversity of Jewish life in Ireland throughout the centuries, and that the story of Jewish communities remains untold in many parts of Ireland. 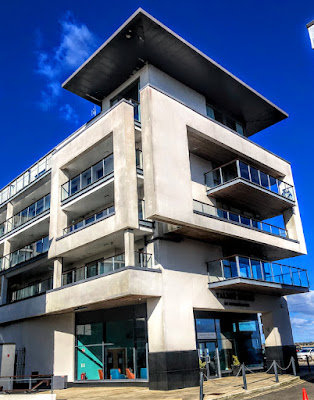 The Stonebridge apartments on Paul’s Quay have been redeveloped the Talbot Hotel group (Photograph: Patrick Comerford, 2022)